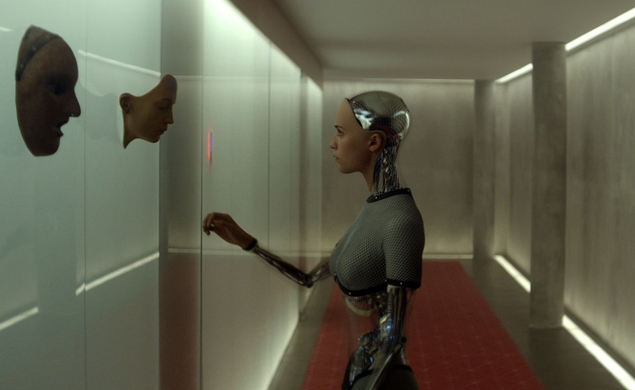 This week sees the theatrical release of Alex Garland’s directing debut, Ex Machina, a heady science-fiction thriller about an artificial intelligence in the shape of a human woman, played by Alicia Vikander. As the posters show, Ava starts out with a visibly artificial body, all transparent surfaces, metal mesh, and visible metal tendons. But before long, as part of her mission to seduce the man analyzing and judging her, she’s covering up—and joining the ranks of artificial life forms who look fully human, and have to convey their otherness through performance, rather than through special-effects wizardry or prosthetics. Which got us thinking about those other cinematic humanoid robots, the ones that make us consider what humanity means. (Or at least what a budget-saver it is for filmmakers to not have to pack every robo-actor into a bulky, flashy Robbie The Robot suit.) Here are our favorites:

Tasha Robinson, You-know-who in Alien. Massive spoilers ahead. The Alien franchise installments have stuck by the idea of human-looking artificial life; after the aliens themselves, the android characters played by Lance Henriksen and Michael Fassbender have been the most memorable recurring aspect. But to some degree, they’re all just fan-fic variations on the original: Ian Holm’s character Ash, the science officer in Ridley Scott’s 1979 franchise-starter. This was the only Alien to make a surprise out of the android’s nature—in a film already full of horror elements and memorable shocks, the shock when Ash’s crew-mates knock his head off and he keeps fighting, bleeding milky fluid, is a heart-stopper—but his performance is dead perfect to make the reveal make sense. His bloodless, placid delivery before his coming-out scene is chilling enough. The post-reveal conversation, where his severed head speaks calmly and admiringly about the “purity” of the alien being killing the crew, “unclouded by conscience, remorse, or delusions of morality”—that’s the scene where the film crosses over from standard cast-attrition slasher to sheer nightmare genius. Holm is terrifying even as a goo-covered severed head. That takes some talent.

Rachel Handler, Sean Young in Blade Runner: For better or for worse, Blade Runner was Sean Young’s opus, both the beginning and the apex of a career that started crumbling in the years after (thanks to some controversial moments and, as she tells it, classic Hollywood sexism). But what an apex it was. As Rachael, a young woman who (spoiler alert) doesn’t know she’s a Replicant until later in the film, Young keeps the audience guessing right along with her. It’s an unbelievably good performance, for its subtlety and raw power. I mean, think about the direction for that role: “You’re a robot that doesn't know it’s a robot, but maybe does on some level, and other people do, and then, eventually, you find out.” But Young nails it in every single scene. She starts out as an emotionless femme fatale, all Lady-Gaga-esque couture and eyebrows arched in perpetual challenge. As Harrison Ford gives her the Voight-Kampff test, determining whether she’s human, that cool gaze hitches every so often, just barely hinting at her A.I. interior. Later, when Rachael realizes who (or, more appropriately, what) she really is, Young wisely imbues her with more humanity than before, capturing the pain and humiliation of being exposed as nothing more than a carbon copy, of learning your precious memories belong to somebody else. Just look at these tears (not in the rain, though):

Scott Tobias, The Terminator, Terminator 2: Judgment Day: In a twist that was spoiled in the marketing, Arnold Schwarzenegger’s high-tech robot from the future turned from relentless killer in the first Terminator to benevolent protector in Terminator 2: Judgment Day, which has a more advanced piece of technology, the T-1000 (Robert Patrick), looking to wipe out a young John Connor (Edward Furlong) before his future self can foment revolution. The robot’s powers here are roughly the same—he’s the same now-outmoded model, after all—but his relationship with Connor is a tender, funny, and ultimately humane one that gets the most out of Schwarzenegger’s charisma as well as his brawn. The fact that he’s gone from the height of future technology to a crude fossil makes The Terminator more vulnerable in the sequel, and director James Cameron continually emphasizes the robot’s journey from perplexed and quizzical about human beings to understanding why they cry. And that’s the advantage of movie robots that have the appearance of flesh and blood, even if they're hiding a metal skeleton underneath: We can relate to them—and sometimes, they can relate to us, too.

Keith Phipps, The Gunslinger, Westworld: Michael Crichton’s 1973 film imagines an amusement park in which all the androids are programmed for the entertainment of the adults who visit. Sometimes that means watching a jousting contest in Medieval World. Sometimes that means participating in an orgy in Roman World. And sometimes that means taking down a badass, black-clad gunslinger (played by Yul Brynner) in Westworld. But what if, whether through an awakening conscience or a mere circuitry glitch, the androids decided they’d had enough? Over the course of Westworld, Brynner’s Gunslinger becomes the murderous, stone-faced embodiment of robot resentment, intent on wiping the grins off the faces of the citified flesh-clad oppressors playing at being cowboys (played by the appropriately citified Richard Benjamin and James Brolin). Westworld doesn’t have the strongest grounding in how artificial intelligence works, but Brynner makes it terrifying anyway. He’s a plaything given human shape who becomes the worst nightmare of those intent on using him. And don’t those who want to pretend to use their fellow humans as toys deserve to be toyed with themselves?

Nathan Rabin, Gigolo Joe, A.I.: Jude Law is almost too handsome to be human. With the possible exception of his performance in The Talented Mr. Ripley, his slightly unnerving good looks were never put to better use than in A.I., where he played Gigolo Joe. As his name suggests, Gigolo Joe is an android built to satisfy humans’ sexual needs, but like Haley Joel Osment’s David in the film, there’s something lost and sad about him, despite his robotic origins. There’s also something oddly romantic and innocent about the character as well, which only adds to the pathos of the performance and A.I., which revolves around a universe full of sad androids and lost humans.