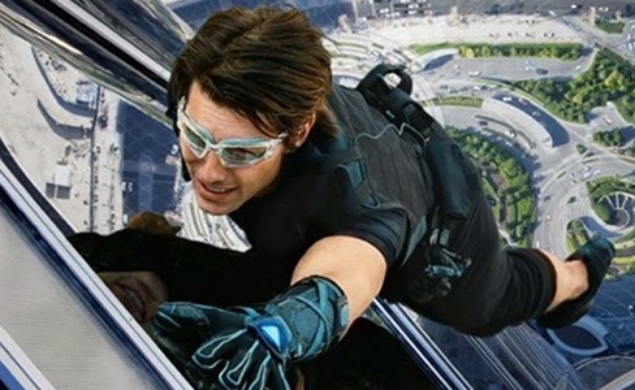 This week sees the release of the highly anticipated Furious 7, the latest entry in a franchise built on the idea that the best solution to any problem is hurling a souped-up car at it. Over its seven entries, the series has taken an ever-escalating approach to its automotive action, an approach facilitated by its liberal use of CGI and green-screen technology to create its physics-defying effects. And while that approach certainly has its merits, within the Fast & Furious series in particular, it got us thinking about the films that don’t rely on computers to create their heart-stopping action sequences. So strap in, sign the waiver, and check out some of our favorite practical stunts from both the pre- and post-CGI eras:

Tasha Robinson, through the storm, Steamboat Bill, Jr.: Even people who’ve never watched a silent movie are probably familiar with Buster Keaton’s most famous stunt, in which the facade of a house collapses onto his character, who remains unscathed because he happens to be lined up perfectly with an open window. That shot turns up endlessly in magic-of-the-movies montages and history-of-cinema reels, and it is an amazing moment, because it’s exactly as it appears on screen: Director Charles Reisner dropped part of a mocked-up house on Keaton, who only escaped injury because the window-hole landed exactly on its designated marks. Still, it’s far from the only great effect in 1928’s Steamboat Bill, Jr. The shot comes in the middle of a hurricane sequence full of memorable practical effects: Keaton’s character absently exits a speeding car and takes a rolling tumble through the mud. He winds up in a hospital, which blows away, leaving him and the beds and furniture untouched. He tries to climb a tree to safety, but it uproots and flies him around town. And eventually, the jail where his father is incarcerated blows into the river, and he has to save the old man by crashing a steamboat through the sinking building. The film isn’t just an early example of wild action sequences, it’s an early example of filmmakers deciding they wanted big, crazy, unlikely things to happen for comedy value, and then figuring out how to do them, regardless of cost, practicality, or basic regard for human life.

Keith Phipps, The boulder, Raiders Of The Lost Ark: I’m not anti-CGI, really, though I end up saying that so often I wonder if I’m protesting too much. Yet if you want a good Exhibit A for the intangible qualities that can only be accomplished using real people and real objects interacting in real space, may I direct you to one of the most famous moments in the opening sequence of Raiders Of The Lost Ark? Inspired by a Carl Barks Uncle Scrooge story, George Lucas and Steven Spielberg’s 1981 film pits archeologist hero Indiana Jones against a giant boulder on his way out of a South American temple that doubles as a deathtrap. That’s really Ford in the shot running from a big rock—and, in one unplanned moment, stumbling as he tries to outrace it. It’s really a boulder, too, or at least a Hollywood prop version of a boulder. Ford wasn’t in much real danger and, as stunt work goes, it’s pretty rudimentary stuff: All he has to do is run. But it looks like he’s running for his life, and while all movies are a matter of illusion, some illusions work better than others.

Scott Tobias, on top of the train, Supercop: Since Tasha has already covered Buster Keaton with Steamboat Bill, I’ll shine the spotlight on one of Keaton’s most devoted acolytes, Jackie Chan, who was at the height of his powers in 1992’s Supercop (a.k.a. Police Story 3), which added fellow Hong Kong legends Maggie Cheung and Michelle Yeoh to the cast and brought real scale to his action-comedy setpieces. The film climaxes with a stunning sequence on top of a train, which Yeoh scales on a motorcycle to partner with Chan in fighting off the bad guys, all while the blades on a fallen helicopter still continue to spin. A bit where Chan gets knocked into a water pipe and swings around to another train car counts as his homage to Sherlock Jr., but the whole thing is a showcase for the type of hand-to-hand combat, dextrous stuntwork, and clowning around that was unique to him in his prime. The outtakes, as ever, reveal the agony of Chan’s movie magic, from his attempts to mount a moving train while dangling on a ’copter ladder to Yeoh’s stunt double flying right off the edge of the car multiple times.

Nathan Rabin, Jean-Claude Van Damme going through the motions, JCVD: Robert McKee famously proposed that in screenwriting, action is character; the opening scene of JCVD reveals the bleary, world-weary essence of its titular protagonist’s character through his actions as he takes on an army of henchmen and threats in one long, uninterrupted take. On screen, Van Damme is a man of action whose machinery is beginning to break down. He doesn’t quite hit his marks. He’s sluggish and a bit lost. Usually, we revere stunts because they seem so superhuman and perfect; I love the stunt work in JCVD, particularly the anonymous extras who have to pretend to get beaten up by a dispirited old man, precisely because they show the seams and imperfections less-ragged movies would go out of their way to hide.

Rachel Handler, the spinning hallway, Inception: While I’m not a huge action-movie fan (on-screen explosions make me sleepy), I remember being completely stunned (and roused from my eternal slumber) by the spinning-hallway scene in Inception, so much so that I went home and Googled how Christopher Nolan and co. had accomplished it. I assumed they’d used CGI, but that’s also because I just assume everything in life is CGI unless somebody tells me otherwise. As Director of Photography Wally Pfister tells it, it took several massive, rotating sets (a horizontal one that rotated 360 degrees, a vertical one wherein the actors wore wires, and another on that saw the actors strapped to steel trolleys), 500 crew members, and three weeks to film the scene. Joseph Gordon-Levitt underwent weeks of training just to learn how to maneuver inside of the hallway. “If you jump at the wrong time, you could be falling 12 feet through the air,” Pfister told MTV. Also, all of this took place inside a World War I-era airship hangar just outside London, because why not?

Genevieve Koski, The Burj Khalifa, Mission: Impossible—Ghost Protocol: While amazing practical effects from the pre-CGI era are notable for their ingenuity and daring, practical effects from the era when pretty much anything can be achieved with computers have a different sort of charm: They represent a commitment to filmmaking tradition and a certain amount of insanity that aren’t necessary, but are very welcome, in the current moviemaking climate. Tom Cruise is perhaps the most notable practitioner of this particular strain of insanity, famously insisting on performing his own stunts in the Mission Impossible franchise, which seems to delight in finding ever-higher things from which the gung-ho star can perilously dangle. It would be one thing if Cruise were simply strapping in to hang 20 feet up in front of a green screen, but Cruise is nothing if not committed to the idea that he is an infallible superhero, hence his shiver-inducing performance on the outside of the Burj Khalifa tower in Mission: Impossible—Ghost Protocol. Having Ethan Hunt run along the outside of the record-setting skyscraper is the sort of thing that could have been (relatively) easily achieved with green screen, possibly even for less money than it cost to rig up and insure Cruise to do it for real. But Cruise and director Brad Bird’s audacity comes through in the final product, and the sequence is rightfully brought up in discussions of the all-time greatest on-screen stunts. Here’s a good barometer for how impressive a practical stunt/effect is: Does it look just as awesome outside of the movie itself? To wit: The behind-the-scenes video of Cruise filming the sequence (and then taking a picture sitting on top of the damn skyscraper) is almost as intense as the final product.