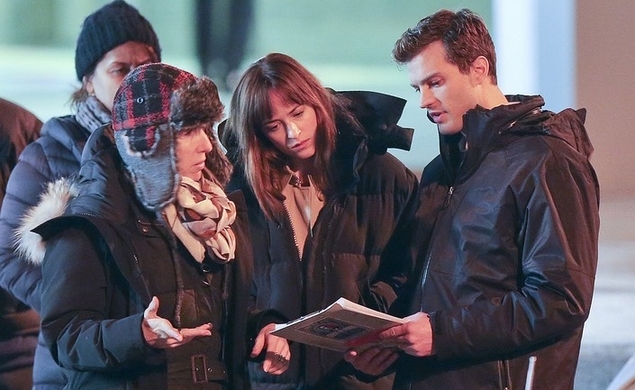 Last month, our Glorious News Empress Rachel Handler wrote a thorough breakdown and analysis of the various factors that have driven a creative wedge between 50 Shades of Grey author E.L. James and Sam Taylor-Johnson, director of the recent film adaptation. Everything from James’ choice to omit Taylor-Johnson’s extended sexual jellyfish metaphors to Taylor-Johnson’s choice to omit the novel’s mid-menstrual funny business made the atmosphere on set tense. But James and Taylor-Johnson, as natives of well-mannered Britain, folded their hands and pursed their lips and played it proper, agreeing to collaborate on two promised sequels. Even so, a schism lurked on the horizon. The public understood that it was only a matter of time until one of them budged, and an item published today on Deadline confirms that that has come to pass.

Taylor-Johnson was bound to the 50 Shades franchise, and though it was sexy and fun and kinda thrilling at first, it lost its appeal rather quickly. As such, the director has wriggled out of the fur-lined cuffs that kept her attached to the creative property. STJ will not be involved with the upcoming adaptations of the second and third novels in the franchise, Fifty Shades Darker and Fifty Shades Freed, respectively. She’s taking her screenwriter with her, too; Kelly Marcel has declared that she will not return to pen scripts for the sequels, either. STJ provided Deadline with an official statement that suggests she’s maintaining an attitude of professionalism about the whole skirmish:

“Directing Fifty Shades Of Grey has been an intense and incredible journey for which I am hugely grateful. I have Universal to thank for that. I forged close and lasting relationships with the cast, producers and crew and most especially, with Dakota and Jamie. While I will not be returning to direct the sequels, I wish nothing but success to whosoever takes on the exciting challenges of films two and three.”

Whosoever indeed! This leaves a gaping opening that must be filled quickly and forcefully. Which director will tag in and provide 50 Shades of Grey with the directorial oversight it craves—nay, needs? After taking the public temperature on Twitter, it looks like the consensus is that the property should remain in female hands, which definitely seems wise. The obvious first choice would be the ghost of Nora Ephron, who could navigate the hilly romance that unfolds over the second and third novels all without sacrificing the source material’s pounding, relentlessly graphic sexuality. (I mean, have y’all seen Harry Met Sally? Yowza.) But studio heads are notoriously wary of dark magicks, so their casting options will most likely be restricted to the realm of the living. Though it wouldn’t be her style to slum it with such less-than-reputable material, Lynne Ramsay could direct the hell out of Darker and Freed with one lens tied behind her back. Feel free to chime in with your own suggestions, realistic or otherwise, in the comment section below.