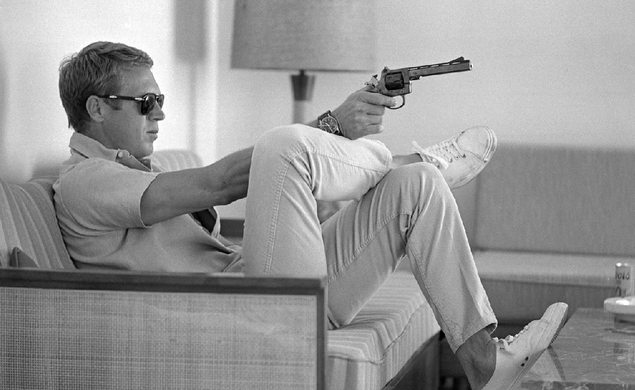 I will forever hold a grudge against Steve McQueen for stealing Ali McGraw from Robert Evans. There was Evans, at the the height of his power and majesty, and there was his girl McGraw, invited to join some Jim Thompson adaptation that crazy son of a bitch Sam Peckinpah was directing with Steve McQueen. Should Evans have been scared of McQueen’s reputation as a womanizer? He should have been quaking in his boots.

But the distracted mogul-to-be dispatched the love of his life into McQueen’s arms for the all-too-aptly named vehicle The Getaway, and it wasn’t long until Mr. Motorcycle and Ms. Love Story were shacking up and leaving old Kid Dynamite to lick his wounds in various Hollywood hot spots and get introduced to a certain white lady named cocaine that sent his life into a tailspin. Bad luck? Without it, he would have none.

But there was more to McQueen’s life than stealing Ali McGraw from Robert Evans. He was also a movie actor of some note who loved to ride motorcycles, drink excessively, and treat Hollywood with the kind of serrated contempt that made show business revere him.

Considering what an iconic figure McQueen struck, it’s surprising that there hasn’t been a major Steve McQueen biopic yet. That is about to change with the revelation that financing has come together for a biopic on the actor’s life and career that has previously attracted the attention of such A-listers as James Gray (The Immigrant), Jeremy Renner, Channing Tatum, and Ryan Gosling. As of this writing, neither screenwriters nor stars have been attached to the project, although the article suggests that the screenplay will be partially based on the 2010 biography Steve McQueen: The Life And Legend Of A Hollywood Icon, written by Marshall Terrill, and partially on an explosive bit of information found in the diary of the maid who was caring for him at the end of his life.

Graham Kaye, one of the producers, teases to Deadline, “Something happened in McQueen’s life that has been kept secret for a long time.” Here are our guesses; feel free to add your own: