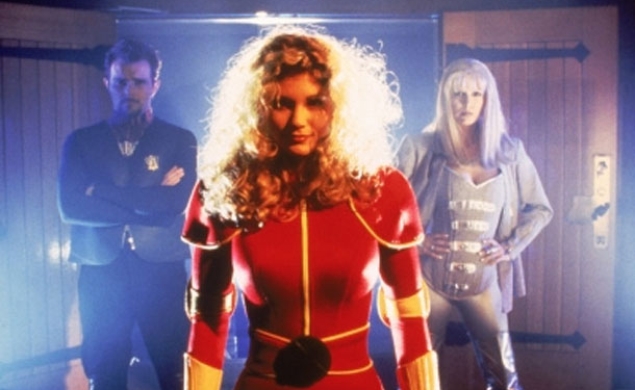 Here at Mutations, we’ve chronicled how superheroes were misused, abused, and taken for granted when show business still looked at them as silly comic-book characters for kids, and not as the most precious resource in the universe—more precious, even, then Unobtainium or liquid cocaine. In the 1970s, that meant the folks over at Marvel signing off on dodgy direct-to-video movies in which Dr. Strange was just some dude with a mustache and a suspiciously out-of-shape Spider-Man spent most of his time walking cautiously across the roofs of tall buildings.

In the 1980s, meanwhile, the keys to Superman were given over to the schlockmeisters at Cannon, who succeeded in destroying Superman with Superman IV: Quest For Peace, but were unable to make good on their plans to give the same treatment to Spider-Man. Cannon would represent the bottom for most companies, but Marvel somehow crashed through the human nadir that was Menahim Golan and ended up giving its precious, precious creative property to the cheapest man in Hollywood: Roger Corman and his New World productions.

Corman infamously produced The Fantastic Four movie that was never meant to see the light of day (but can now of course be found on YouTube) and in 1996, New World, which Corman founded with his brother Gene, released the 1996 X-Men television movie Generation X. The television movie was designed as the pilot for a series, but the series was never picked for reasons that should be obvious to anyone who watches it.

Like the X-Men movies, Generation X  (which, awesomely enough, begins by defining “mutation”) takes place at Professor Xavier’s School For Gifted Youngsters. But this is not the well-funded, elegantly designed mutant secondary academy where the likes of Kitty Pryde would later matriculate. Professor Xavier is nowhere to be seen in Generation X, along with most of the mutants you know and enjoy. Instead, he has left the school to the B-team, most notably Emma Frost/White Queen (Finola Hughes) and Sean Cassidy/Banshee (Jeremy Ratchford).

Frost and Cassidy recruit a pair of new mutants to their academy, the popular Jubilee (Heather McComb)—who is Chinese-American in every other iteration of her story, but for reasons never explained here (racism, maybe?), looks more like Brittany Murphy post-makeover in Clueless—and Skin (Agustin Rodriguez), a young Hispanic man with a regrettable perm whose mutation allows him to expand his limbs to freakish dimensions, so that his arms become like an unspooled garden hose. Generation X confirms, as did the recent Forgotbuster The Fantastic Four: Rise Of The Silver Surfer, that stretchy powers are among the lamest and least cinematic. This probably explains why there hasn’t been a Plastic Man movie yet, despite the angry public outcry for one.

These mutants are members of Generation X, however, so they’re always rocking flannel and making references to then somewhat-timely phenomena like Hootie & The Blowfish, Eddie Vedder, Edie Brickell, and Quentin Tarantino. Directed by Jack Sholder, who did much better work in the first Nightmare On Elm Street sequel and the cult science-fiction classic The Hidden, Generation X favors a brightly lit, candy-colored style that recalls the headache-inducing visual overload of Batman & Robin, which was released around the same time for 100 times the budget.

The pilot’s plot revolves around the mutants squaring off against mad scientist Russel Tresh (Matt Frewer), who has developed a machine that allows him to enter into people’s psyches and dreams, not unlike Freddy Krueger in one of Sholder’s better-known films. At first, Tresh uses this power for the purpose of subliminal advertising, to get into people’s minds and really convince them to buy a videogame or cosmetic product. But that’s not enough for this sick twist. In an unfortunate illustration of the film’s maturity level, he uses these special powers to make his soon-to-be-ex-employers all engage in explosive flatulence at the same time, and it’s not long until Tresh is using this machine to torment the members of Generation X, most notably the suggestible and easily led Skin.

The great character actor Frewer is first-billed here, and was apparently given free rein to mug up a storm. He’s a twitchy, manic, joking force of nature here, half Jim Carrey in The Mask, half Max Headroom redux. He’s all out-of-control energy in a project that’s otherwise inert and underachieving. He steals the film in a walk, but it’s an exceedingly minor theft, as Generation X should appeal only to Marvel completists who want to see just how cheap and dingy a Marvel production can be. Thematically, at least, Generation X has a lot in common with X-Men: First Class, but Frewer aside, it is unmistakably third-rate.