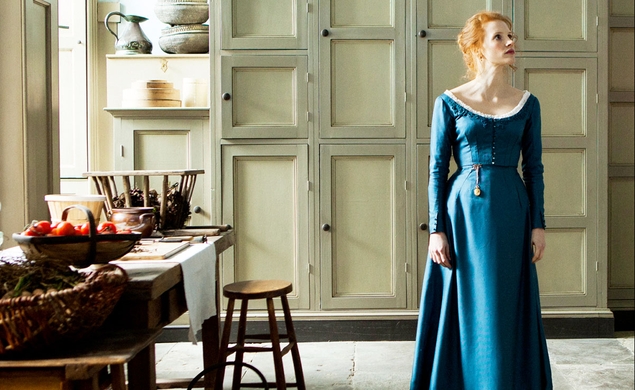 Although the upcoming The Huntsman, the sequel to Snow White And The Huntsman, may have quite noticeably dropped the “Snow White” portion of its title (and, we presume, its narrative), that doesn’t mean we’re in for two hours of Chris Hemsworth stomping around a forest, demanding that people call him “Huntsman” (not a proper name, dude) and saving people from milk-bathing weirdos.

Deadline reports that Jessica Chastain has joined the cast of the film in an undisclosed role, although considering that the feature appears to have locked down two badass ladies for villainous roles, we’re going to go ahead and guess that Chastain will be a nice lass. Perhaps also with skin white as snow? And a predilection for hanging out with kindly dwarves? Maybe she likes birds? Anything is on the table here, guys, we’re just talking out loud.

The film has also officially added Emily Blunt to its cast, as the actress was rumored to join as Theron’s character’s (also evil, what a family) sister way back in January. And Theron is back, too, even though her character quite notably bit the big one at the end of the first film. Perhaps she really can live forever. In any case, The Huntsman, a film ostensibly about a beefy guy, now has the kind of female-led cast that most films can only dream about locking down. Are we suddenly looking forward to this thing? Someone refer to a mirror or something.

Nick Frost will also be back for more forest-set hijinks, reprising his role as the dwarf Nion. Eeesh, Snow White really did get hung out to dry on this one.

The new film will reportedly see “the Huntsman on a quest to find the magic mirror (which has been stolen), forcing him to face not only his past but the evil Snow Queen who’s set on avenging her sister Ravenna’s death.” That’s a relatively straightforward logline, but maybe this one has some tricks up its velvety, heavily adorned sleeve.

The Huntsman will be directed by newbie Cedric Nicolas-Troyan, an Oscar-nominated visual effects artist and supervisor who worked on the first film. Frank Darabont, who dropped out as director earlier this year, wrote the script. The film currently has a set release date of April 22, 2016.