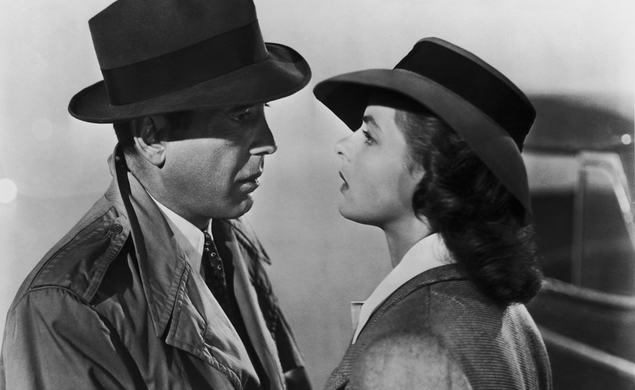 Listening to the Lux Radio Theater’s radio adaptation of Casablanca for this entry in Mutations took me back on multiple levels. First and foremost, it immediately took me back to the glamorous, sexy, tragic world of Casablanca, a popular choice for the greatest movie of all time for a very good reason: It’s every bit as good as its vaunted reputation suggests, a masterful exercise in storytelling that represented the apex of collaboration within the studio system.

But listening to the ancient radio broadcast also took me back in other ways as well. It took me back to the exciting, glamorous, long-ago days of World War II, but also to my childhood. In his attempts to raise a proper eccentric, my father ensured that I had a rich education in the world of classic radio. I might not have seen the latest Chevy Chase movie, but I was fully versed in the rivalry between Jack Benny and Fred Allen, and the absolute necessity of purchasing war bonds if our boys were ever going to defeat Hitler and his minions.  Yes, it was important for my father that I enjoyed the entertainment of the long-dead rather than the pastimes of my contemporary peers. So listening to The Lux Radio Theater’s presentation of Casablanca was littered with Proustian moments for me, corny little tropes of classic radio that instantly catapulted me back to my weird childhood.

The Lux Radio Theater’s version of Casablanca is hosted and produced by Cecil B. DeMille in his unofficial role as the embodiment of Old Hollywood. The episode begins with a rambling spiel from DeMille about the movie, the difficulty of securing talent from various studios and stars Hedy Lamar and Alan Ladd. Lux strove to cast the actors from the original films in their radio adaptations whenever possible (and there is a radio version of the film with Bogart that I did not listen to), but DeMille calls the recruitment of Ladd and Lamarr in the lead roles “a talent scoop of the first magnitude in Hollywood” that could never happen in film because the actors were contracted to different studios. Lastly, DeMille thanks the good people at Lux toilet soap for financing the endeavor.

This is not the last we will hear about Lux toilet soap. In fact, over the episode’s 60-or-so minutes, Lux toilet soap, the sponsor of the evening’s entertainment, gets nearly as much play as Casablanca itself, and I never stopped finding the juxtaposition of Hollywood glamour and the phrase “toilet soap” hilarious. The show pitches its sponsor as “the soap the stars use,” but no matter how stubbornly they try, they cannot infuse the phrase “toilet soap” with the glamour intended.

I enjoyed radio productions as a kid because they fueled my imagination—with the absence of visuals, I was forced to imagine what was happening in my head. But the tricky thing about a radio adaptation of a movie everyone knows and has seen, like Casablanca, is that Hollywood makes that kind of imagining prohibitively difficult. The radio presentation of Casablanca dares you not to fill in the blanks using the stars of the film that inspired it. So even though Alan Ladd voiced protagonist Rick ably, capturing his signature combination of world-weary cynicism and indefatigable romanticism well, in my mind I kept imagining Humphrey Bogart speaking Ladd’s words, just as I couldn’t help but imagine Ingrid Bergman’s serenely beautiful visage when Lamar was performing the role of Ilsa.

For a gorgeously filmed, costumed, and designed motion picture, Casablanca lends itself surprisingly well to an entirely audio medium—the script and plotting is so consistently witty, breezy, and quotable that it’s easy to forget that under all the quips and maneuvering this a story about concentration camps, Nazis, death, betrayal, and the cost of human life. Casablanca has a pretty involved, complicated plot that the radio adaptation streamlines smartly without losing anything essential. At the same time, a radio production, no matter how strong, is never going to improve on Casablanca. But the Lux Radio Theater team offers a solid substitute and even without the visuals, it’s still hard not to get choked up when Sam plays “As Time Goes By” for Ilsa.

Yet because the film version of Casablanca is burned so indelibly into my mind and the minds of cinephiles everywhere, I found myself fascinated less by the production itself than by everything around it, from the scripted ads for Lux toilet soap that take the form of little playlets in themselves to an ending spiel involving DeMille and the cast that is fascinating for a number of reasons.

It’s fascinating primarily because Ladd reaches out to Humphrey Bogart fans and says that while it was an honor to play the role of Rick, it belongs to Bogey, a move that seems at once extraordinarily gracious and essential. It’s also fascinating for the weird, awkward banter between the principals, like when Lamar, who was married to co-star John Loder—who plays Victor Laszlo in the radio presentation—stiffly insists her husbands “beats” her, before pausing uncomfortably and with terrible comic timing, finishing, “at Gin Rummy.” This closing spiel also includes the requisite appeal for listeners to buy war bonds, lest they find their innocent hometowns overrun by Nazis and other ne’er do wells.

The Lux Radio Theater version of Casablanca is a strange beast that offers the full story in about half the time, once commercials, banter, intros, and outros are factored in. I enjoyed it for what it was—a respectable take on a classic tale—rather than ruing what it was not, namely the film version of Casblanca. But if it’s impossible to think of anyone but Humphrey Bogart and Ingrid Bergman as Rick and Ilsa, the production is convincing in two other ways: I’ve decided I need to buy war bonds to support our troops in a concrete way, and I need to get my hands on some of this wonderful Lux toilet soap. Does anyone know where I can find some? I hear it’s the toilet soap all the most glamorous stars use.