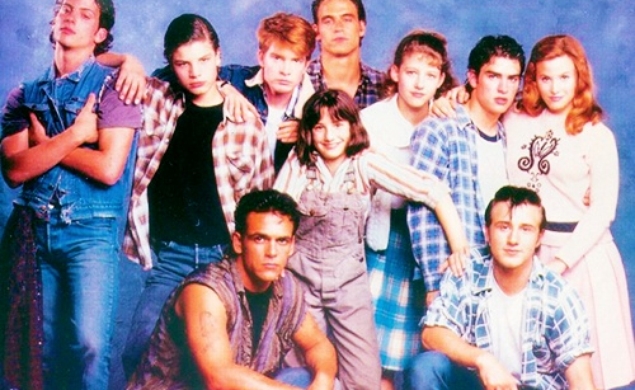 I kind of love S.E. Hinton’s The Outsiders, both in novel and film form. It’s one of those glorious books that convinces kids that literature is for them, that novels can speak to readers in a voice that’s conversational and intimate and relatable. There is no distance between the writing and the characters in The Outsiders. There is no sense that the author is straining to remember what the at once singular and universal experience of being a teenager felt like from the impossible divide of adulthood.

That’s because The Outsiders wasn’t written by an adult. It was written by a 17-year-old who understood that to be a teenager was innately to be an outsider, and to be a poor teenager without much in the way of parental guidance was to be further alienated from adult mainstream society.

Despite the androgynous nature of the author’s pen name, The Outsiders was written by a woman—a girl, really—about what she imagined a community of men was like. In that respect, the novel and Francis Ford Coppola’s achingly sincere, extremely faithful 1983 film adaptation represent a strange, strangely poignant female fantasy of male sensitivity, where the rough boys—the Greasers, in the novel’s parlance—have muscles, tattoos, and tough haircuts, carry knives, and live for rumbles where they work through their socioeconomic frustrations by wailing on members of the Socs, or the rich gang. Yet they’re always talking about their emotions and hugging each other and professing their love for one another.

Coppola set out to adapt the book as faithfully as possible, and I remember vividly watching the audio commentary for a deleted scene with two of the story’s brothers huddled in bed together, where Coppola said he regrettably had to cut the scene because it was too homoerotic (and incestuous). That is really saying something, as The Outsiders is extraordinarily homoerotic, a  macho yet totally emo tale of beautiful, jacked-up men who stare at each other with intense but cryptic gazes, almost as if they can’t decide whether they want to punch or kiss their adversary.

So I was probably at home watching The Outsiders pilot on FOX back in 1990, especially because, as Bart Simpson relates in the opening to this clip, its airing preempted three of my favorite shows: The Simpsons, It’s Gary Shandling’s Show, and The Tracey Ullman Show. Executive-produced by Francis Ford Coppola, with Hinton as a consultant, the show opened with Matt Dillon’s character Dallas from the movie (in a clip actually just taken from the film itself) being shot and killed by the police, a trauma that is referenced throughout the hour-and-a-half pilot.

Dallas is dearly missed, but thankfully, a replacement rolls into town in the form of Tim, a badass who throws sodas in people’s faces and hits on girls and talks disrespectfully to police and other authority figures—you know, a real Charlie Manson type. This bad influence rides into town and immediately makes an impression on a trio of brothers: sensitive narrator and Hinton surrogate Pony Boy, the humorously nicknamed Sodapop, and the eldest brother Darrel, who must juggle his job as a roofer with the responsibilities of caring for his two younger brothers and keeping them away from the rumbles that will land them in foster homes, or worse.

Coppola’s The Outsiders benefited from one of the greatest casts in film history, capturing actors like Patrick Swayze, Tom Cruise, Matt Dillon, Rob Lowe, Emilio Estevez, Ralph Macchio, C. Thomas Howell, and Diane Lane at the height of their radiant youth. The cast of the television show can’t help but pale by comparison. The acting here is stilted, as is the dialogue, with the best actors in the fringes: a young (but still pretty grizzled) Billy Bob Thornton makes an indelible impression as a bartender full of scars both internal and external, and a young Leonardo DiCaprio makes much less of an impression in a bit part credited only as “Kid fighting Scout.”

It wasn’t just the cast that distinguished the film. Coppola shot the movie seemingly entirely in the magic hour, giving it the golden glow of a half-remembered dream and a score that built up the already heightened emotions. By comparison, the pilot, while expensive and attractive for a network show at the time, seems pedestrian and stiff. It veers into clunky self-parody in the early going, particularly in its unacknowledged but rampant homoeroticism, and while it improves as it proceeds, there’s still a massive gulf in quality between the TV show, the movie, and the novel that taught generations of disgruntled kids that novels weren’t just for grown-ups.

With The Outsiders, as with his adaptation of Mario Puzo’s The Godfather, Coppola accomplished a tricky feat of transforming the pulpy material of a paperback novel into a glorious, immaculately crafted cathedral of film. He wasn’t so lucky with his TV version of Hinton’s young-adult classic, which, despite good intentions and some solid scenes, degrades rather than elevates its beloved source.