Peter O'Toole is a man of multitudes in The Stunt Man 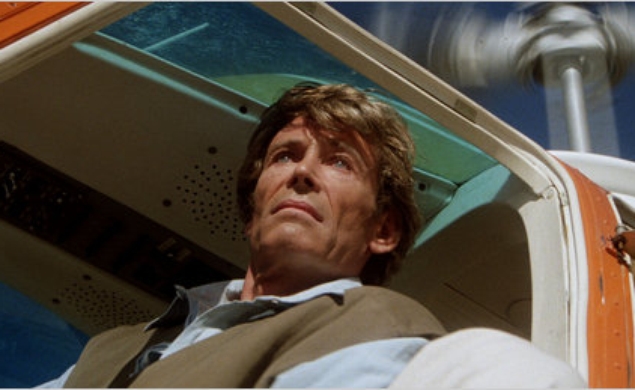 Some of the greatest leading men and women in film are also some of the greatest character actors. That is certainly true of Peter O’Toole, who was nominated for an Oscar for Best Actor for what was unmistakably the supporting role of Eli Cross, director, egomaniac, and the engine that drives Richard Rush’s brilliant, allegorical 1980 dark comedyThe Stunt Man.

Cross, whose name is a not-so-subtle hint at the alternately God-like and Satanic qualities of his character, is first seen in a helicopter, holding an apple in his hand. We cannot see his face, but already Cross cuts a mythical, biblical figure. He is the Faust as well as the snake in the Garden Of Eden, who tempts our hapless, half-deranged protagonist not with the fruit of knowledge, but with an opportunity to make a little money, escape the lawmen on his trail, and quite possibly die a watery death in the process. Like an angel or a demon, Cross is often seen in the air, hovering over the characters physically via helicopters or cranes that highlight just how above them he is, both physically and in terms of power. Writer-director Richard Rush films O’Toole’s Cross in ways that continually highlight his power and authority, shooting him from below when he’s not shooting him peering down on his film set like a malevolent god purveying his wicked little kingdom.

The film’s slender but fascinating plot finds Cameron, a Vietnam veteran on the lam (Steve Railsback, best known for playing Charles Manson in Helter Skelter, a performance that echoes his unhinged turn here), finding a dangerous form of protection after a stuntman dies on the set of an anti-war movie directed by Cross. Cross figures he will, to pardon the expression, kill two birds with one stone by simply replacing the dead stuntman with Cameron. It is a perilous bargain, in part because Cross is such a warped, Falstaffian character that he seems just as intent on recreating the crash that killed the stunt man as correcting it. Cross doesn’t just control a chaotic and often surreal set—he literally holds the power of life and death in his hands, and it’s unclear how far he will go with his demonic head games with Cameron, or how far Cameron will push back.

Cross is fascinated by Cameron, in part because he represents the real deal, a man who seems to have left a particularly nasty tour of duty in Vietnam only the day before (when, in reality, he left the jungles of Vietnam many years earlier), while his own actors must wear makeup and costumes and wait for their cues in order to simulate the warfare that’s still raging deep in Cameron’s blood. The film is playing at war; war defines Cameron as a man.

O’Toole plays Cross as a man whose power trips generally have an edge that is both mocking and sinister, jovial and sneering. The dynamic between Cross and Cameron reminded me a lot of the central dynamic in The Master—the twinkly-eyed, perpetually droll Cross has the devil’s charm and uses it to seduce a man who is a grunting, yearning, unhappy id, desperately seeking direction, even if it comes in the form of a Faustian bargain. The Stunt Man toys continuously with reality and fantasy to the point where it can be difficult to determine where one ends and the other begins. It’s a carnivalesque lark whose brevity and gravity are both attributable to the remarkable, pitch-perfect performance of O’Toole, whose character is obsessed with making the ultimate anti-war movie, and understanding the feral darkness at the fore of a man like Cameron—even if it means killing him in the process.

He is a man of multitudes, so while The Stunt Man might seem like a breezy riff on the artifice of show business and the desperate and amoral characters drawn to it, it’s O’Toole’s performance and his character that give it an unusual gravity and resonance and it’s O’Toole who transforms a fiendishly clever morality play into an enduring cult classic about the depths some men will go for art, or just for the sake of seeing how far people can be pushed before they break.