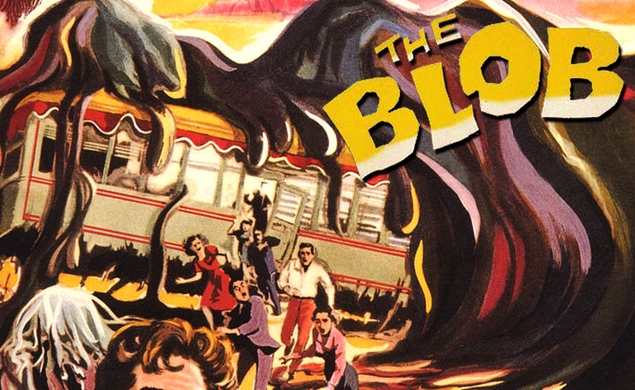 The 1950s: A simpler time, when teenyboppers sucked down egg creams at the five-and-dime, men wore hats to work, and the words “institutional racism” had not yet entered the public lexicon. But on the dark flip side of America’s age of innocence lurked gelatinous monstrosities, absorbing innocent civilians and engulfing entire buildings if left unchecked. In 1958, The Blob took the national goo-monster crisis to task. Starring a 27-year-old Steve McQueen in his first leading role, the DIY-style B-movie shocked audiences with its visions of homespun terror. Though critics were not as impressed, the film has regardless built up a sizable network of devotees. (Phoenixville, Pennsylvania’s annual Blobfest attests to the film’s enduring charms.) One off-kilter remake later, the Blob is again ready for a fresh coat of, er, outermost goo.

Variety reports today that Goldcrest Films plans to produce a re-remake with Expendables 2 director Simon West at the helm. The new film will update the story for the modern day, with all the technological leaps forward that implies. As West said to Variety: “With modern CGI, we can now fully realize the potential of The Blob. The world I create will be totally believable, immersive and emotionally satisfying. It’s a thrill to introduce an enduring icon to a wider audience and a whole new era of fans.”

Perhaps my concerns are misplaced, but that quote is a little worrisome. Besides Steve McQueen’s devastating good looks, the secret to the original’s longevity and gradual ascent to the top of the B-movie heap—Criterion gave it the seal of approval with a lovely restoration on Blu-Ray in 2013—lies in its idiosyncratic practical effects. On the first view of the blob itself, it feels lovably goofy, but there’s also something primally creepy about seeing this misshapen abomination rolling around in the flesh. (Or, whatever it has instead of flesh.) It’s too early to fairly say whether CGI will suck the soul from our beloved blob. But once Goldcrest settles on a U.S. release date, this will be one to watch out for.