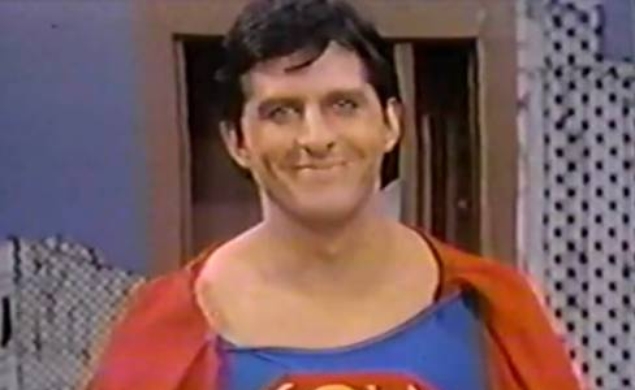 As we’ve chronicled extensively in this column, in the 1970s, big-name superheroes were nowhere near as sacrosanct as they would later become. It’s hard to imagine, but they were actually written off as silly nonsense to amuse the kiddies, not the endlessly debated cornerstones of our culture and economy that they are today. Accordingly, an out-of-shape Spider-Man awkwardly walked through a low-budget, live-action television show, Dr. Strange was played by a dude who resembled Steve Guttenberg, and the Teenage Mutant Ninja Turtles, who are superheroes in their own right, did double-duty as pizza-promoting rock stars and guests of The Oprah Winfrey Show.

Nope. Audiences who think Golan and Globus’ bargain-budget, anti-nuke movie Superman IV: The Quest For Peace represented the nadir of the franchise are advised to check out It’s A Bird…It’s A Plane…It’s Superman!, a 1975 TV movie adapted from a Broadway show of the same name that features Superman and company singing, dancing, and prancing their way through high-camp, low-intelligence hijinks designed to insult the sensibilities over anyone the age of 5.

The problems begin with cardboard sets that look like a stiff wind would reduce them to rubble. There’s nothing wrong with wanting to make a live-action cartoon strip, but the backgrounds here are as blank as those cartoon strips, and give the audience no choice but to endure the weak dialogue and shameless mugging in the foreground.

The utterly forgettable David Wilson, who fatally lacks the charisma of a Brandon Routh, plays Superman/Clark Kent as a self-pitying schmuck, a loser who pines desperately for a Lois Lane (Leslie Ann Warren) who only has eyes for Superman. In his big production number, he mopes about how the strongest man in the world is the weakest when it comes to love, belting out lyrics like, “Why must the strongest man in the world be the saddest man, tell me why / Don’t they know the strongest man can cry?” There’s humanizing a hero and exposing his vulnerabilities, and then there’s transforming the man of steel into a weepy little wuss of a nobody.

As if not to overwhelm its weepy, low-self-esteem-addled protagonist, It’s A Bird… It’s A Plane… saddles him with three of the most pathetic antagonists imaginable. Who needs Zod or Lex Luthor or even the pinky little New Wave snot Jon Cryer played in Superman IV: The Quest For Peace? Hell, for that matter, who needs Superman IV’s Nuclear Man when you have Dr. Abner Sedgwick (David Wayne), a mild-mannered scientist who’s grown bitter after losing 10 Nobel Prizes and turned on humanity? Who needs Luthor when you have the Susan Lucci of the Nobel committee blandly plotting against Superman? Likely realizing Dr. Abner Sedgwick is no one’s idea of a great super-villain, the special adds a professional rival of Clark Kent in the form of Max Mencken (Kenneth Mars) and some cartoonish mobsters—none of whom seem much of a threat to Superman or to anyone else.

It’s hard to criticize It’s A Bird…It’s A Plane…. because there simply isn’t anything to it. It’s the most vanilla possible take on the material, stage-bound and stilted, played unmistakably to the rafters. At times, the special aspires to the ebullient, self-conscious camp of the 1960s Batman, but that had a madcap energy and personality sorely missing from this white-bread, oddly low-budget romp through Metropolis. The filmmakers use comic-book-style illustrations and chapters to give the special the look of a live-action comic, but the action remains flat and inert, lost somewhere between the written page and the television screen.

The musical’s book was written by Robert Benton and David Newman, who co-wrote Bonnie And Clyde and would go on to write the much-loved Superman film adaptation with Mario Puzo. The music was done by Charles Strouse—who has successes like Annie and Bye Bye Birdie to his name—yet almost nothing about the musical or the special resonates. It’s Superman for Broadway-loving children content with cardboard sets, instantly forgettable songs, and off-brand villains. It’s A Bird…It’s A Plane… doesn’t even have the decency to be bad-bad; I’d heard rumors that it was a Spider-Man Turn Off The Dark-like fiasco, but instead It’s A Bird…, It’s A Plane… represents a singularly forgettable one-two punch of bland and boring.