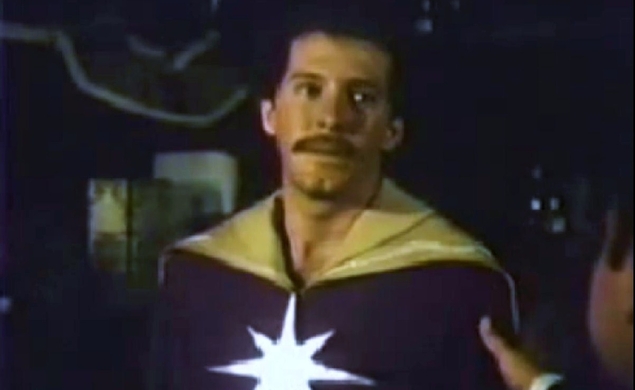 Cumberbatch eventually snagged the role, but the character of the oddball doc was already played on the small screen, in a 1978 made-for-TV movie, by Peter Hooten. And let me tell you, when it comes to leaving your mark on a character, Hooten leaves Cumberbatch some elf-sized shoes to fill when it comes time to slip into the Strange Doctor’s robes.

I suspect television veteran and handsome man Hooten only got the role of Doctor Strange because he possessed a genuine mustache, and having to provide a fake mustache for the lead actor would have seriously cut into the film’s laser-battle and broken-kaleidoscope special effects. It’s one of the weaknesses of Hooten’s performance, and the film as a whole, that he barely matters in the film’s first 20 minutes. That time is largely devoted to a demon who looks like a giant flaming wind puppet and is voiced by Ted Cassidy, chastising secondary heavy Morgan le Fay (Jessica Walter of Lucille Bluth fame, at the height of her beauty) for allowing a wizard to keep a demon from entering the human world.

The good news, however, is that le Fay can redeem herself within the evil community by traveling to earth and keeping the now old and frail wizard from passing his power onto a successor of the unusual doctoral variety. Though sexy and not averse to the strategic display of cleavage, le Fay prefers a hands-off style of witchcraft, so she possesses a sexy college student named Clea Lake (Anne-Marie Martin) into pushing an ancient wizard named Thomas Lindmer (John Mills), the unassuming-looking sorcerer supreme of Earth, off of a bridge.

Lindner survives the attack (there are advantages to being the sorcerer supreme of Earth, after all), but realizes that he needs to stop slacking and track down the girl used as an oblivious proxy for Morgan le Fay’s second-hand wickedness, as well as his successor, one Dr. Stephen Strange (Hooten), a young man with a mustache but little sense of his grand destiny in the eternal war between good and evil.

Really, Strange seems like kind of a womanizing, mustachioed schmuck until the Supreme Sorcerer of the universe reveals his fate by sending him through what looks like an open-ended kaleidoscope. Le Fay, who has the hots for Doctor Strange and wishes to rule alongside him, gives him the various trappings that transform him from a medical professional who is a little bit off into the bona fide super hero we all vaguely know and are somewhat familiar with (but will know a whole lot better in 2017 or so).

Dr. Strange is a marked improvement over Spider-Man Strikes Back, the previous low-budget television production of a Marvel superhero covered in Mutations, though that may just be because the standards for these kinds of productions have been set so terribly, terribly low. If Marvel cinematic movies have a distinct house style, so do these 1970s television productions: Charisma-impaired leads, wooden acting, clunky writing, and special effects that can at best be called charmingly naive.

That Dr. Strange works at all is largely a tribute to Walter, who makes Morgan both terrifying and sexy, an intergalactic minx who lusts after Doctor Strange even as she feels the urge to destroy him. And though it would be overly kind to call Dr. Strange “cosmic,” its synthesizer score and cheap effects do give it a woozy, otherworldly feel.

The forthcoming Doctor Strange would have to whip up some powerful anti-magic to be worse than this adequate bit of television superhero mumbo-jumbo. But the seemingly ageless Walter gives it a sinister mojo that makes it difficult to completely dismiss, even as it’s nearly impossible to embrace without major reservations.