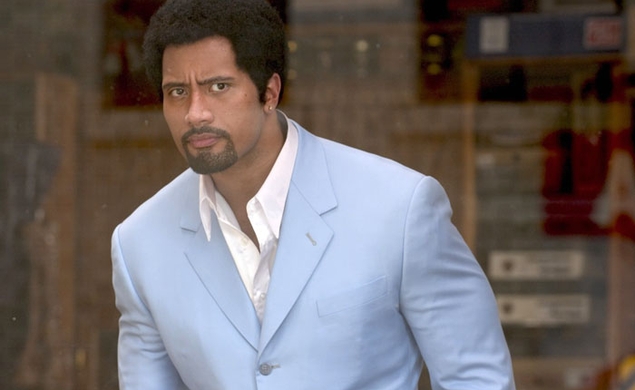 Sometimes a character actor’s greatness stands out in sharper relief when the film they’re stuck in can charitably be deemed a crime against cinema. That is certainly the case with Dwayne Johnson’s joyously unself-conscious turn as a gay bodyguard with a yen to become a singer-actor-model in F. Gary Gray’s abysmal 2005 botch of the Elmore Leonard’s Be Cool.

A wildly underperforming sequel to Get Shorty, Be Cool gets just about everything other than Johnson's casting wrong, beginning with a premise that requires everyone who listens to the music of R&B also-ran Christina Milian to be so blown away they’re convinced they’re listening to the next Nina Simone. The film’s take on pop music is similarly tone deaf. Its conception of hip includes The Black Eyed Peas, MTV, the aforementioned Milian, and Aerosmith, who figure prominently in the plot and add to the grand tradition of huge rock stars playing themselves in movies terribly.

Already deep into the Madame Tussaud’s wax-figure era of his career, a lacquered and coiffed John Travolta delivers a performance so sleepy and apathetic that to call it sleepwalking would be an insult to somnolent perambulators. Pairing him with a horrifically shot and costumed Uma Thurman almost seems designed to erase fond memories of Pulp Fiction and retroactively destroy the sexual chemistry they displayed in that film.

Just about everything about Be Cool is a bloated, tone-deaf mess with the exception of Johnson’s performance as Elliot, the bodyguard and sidekick of Roger “Raji” Lowenthal, Vince Vaughn’s racially confused would-be underworld player. In his first scene, Elliot is dispensed to beat up John Travolta’s Chili Palmer on behalf of Raji, but the moment Chili recognizes Eliott as an actor—a minor one, despite his physical stature—his cold expression gives way to a shameless wannabe’s ingratiating smile.

In part to neutralize the threat, Chili offers to become Elliot’s manager. Puffed full of wonderfully misplaced confidence, Elliot seems convinced that he can attain stardom in multiple fields—acting, country and western singing—largely on the basis of his ability to raise one eyebrow dramatically. Elliot is a narcissist above all and, in one of the film’s best scenes, he sashays about a country-and-western store modeling the ugliest possible outfits, including a silk shirt and baby-blue pants, vamping in the mirror, smacking his ass, and generally luxuriating in actorly self-love.

Ninety minutes of Johnson admiring himself in increasingly sexual ways would be infinitely preferable to what makes up the bulk of Be Cool. Perhaps because he comes from the world of wrestling, Johnson doesn’t need dialogue to be compelling. His character’s head shots get bigger laughs than anyone else’s actual dialogue. His raised eyebrow gets quite the workout here—it is as much his calling card as it was during his time in the WWE—but it wouldn’t work half as effectively if it wasn’t accompanied by that big, cheesy, child-like grin that implicitly says, “Can you even believe I can do this?”

Later, a frustrated Elliot, concerned that his career as an actor and singer isn’t exploding, despite Chili’s management, breaks into the house of Uma Thurman’s character, makes some tea, pops in a video of him covering, “You Ain’t Woman Enough To Take My Man,” and climactically agrees to perform what he conceives of as a “monologue” from Bring It On that consists of him taking on both sides of a heated confrontation between characters of different races. The scene is full of wonderful little choices, as when Johnson exhales deeply before the “monologue” as if needing to conjure all of his strength and intensity for this most momentous of opportunities, like an actor preparing some Shakespeare in an attempt to get into Juliard.

When Chili, as diplomatically as possible, suggests it might behoove Elliot to sing songs from the perspective of a man and likewise deliver monologues from male characters, Elliot takes it all in thoughtfully, as if it’s the first time either notion occurred to him. The tendency with a character like Elliot is to go as big and broad as possible, and, sure, Johnson frequently uses the body language of a sassy teenaged girl, but Elliot’s status as a desperate actor-singer who’ll do anything to get ahead defines him as much, if not more, than his sexuality.

There’s a joy to Johnson’s performance that’s absolutely infectious. He’s fun to look at and he never takes himself seriously. You can go though Johnson’s entire filmography and never find a single moment of pretension or self-consciousness. Even in the dregs of Pain & Gain, he gives his all. I think Johnson is a legitimately great character actor with at the very least an Academy Award nomination in his future. And even if he never reaches those rarified heights, he’s destined to improve every movie he’s in, particularly when playing these kinds of character parts.

Up next: Kathy Bates in Misery