Mutations: “Hotel Chevalier” and the shorter side of Wes Anderson 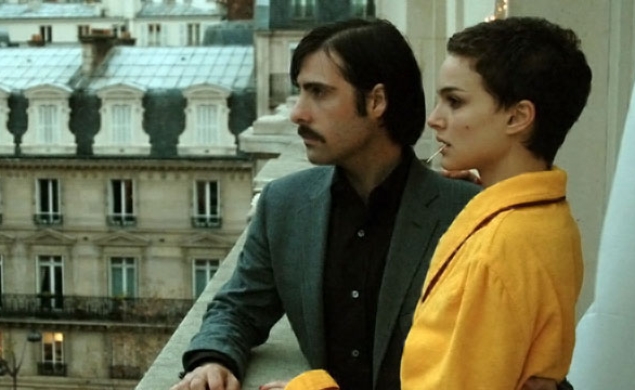 When the Wes Anderson written-and-directed short film “Hotel Chevalier” was released online as a prequel/teaser to The Darjeeling Limited (the credits to “Hotel Chevalier” bill it as “Part 1 Of The Darjeeling Limited”), that trickiest and least lovable of Anderson films, much of the media focused on the nudity of costar Natalie Portman. But it is a testament to just how stylized and airless Anderson’s featherweight trifle is that the naked posterior of one of the most famous and beautiful movie stars in the world becomes less a subject of erotic fixation than just another element of the film’s impeccably assembled mise-en-scene.

Here and elsewhere, Anderson is less interested in the particulars of sex, which can be grunty, animalistic, and undignified, than in a smooth, placid beauty that’s timeless yet evocative of a specific time, place, and mood. In “Hotel Chevalier,” Jason Schwartzman plays Jack, a man hiding out from the world in a lemon-yellow robe in a meringue-colored hotel room that speaks louder and more forcefully than any of the film’s human characters. They Came Together smartly spoofs the cliché that a city could be a character in a movie, but in “Hotel Chevalier” the production design is so exquisite, and so exquisitely Wes Anderson-y, that it ranks as the dominant feature in the whole production.

Then Jack’s unnamed ex (Natalie Portman) calls in a rasp redolent with want and sexuality and asks for Jack’s room number. The dialogue is staccato, the delivery deadpan, the sexuality of the most tastefully restrained variety. Anderson has such masterful control over his material that he even manages to make the iPod dock Jack uses to play British singersongwriter Peter Sarstedt’s Gallic-inflected 1969 hit “Where Do You Go To (My Lovely)?” seem romantic and exotic.

Jack’s ex, resplendent in a pixie cut, ponders Jack’s room, which feels almost like a caricature of a Wes Anderson scene. Anderson’s films can sometimes feel like they pin immaculately coiffed and costumed characters in front of gorgeous tableaus like some manner of cinematic taxidermy. In fact, Jack actually keep taxidermied butterflies in his hotel room (as one does). Anderson’s films similarly can feel like gorgeous little music boxes filled with fragile figures. “Hotel Chevalier” actually features an actual music box.

Jack’s ex brushes her teeth, inquires about Jack’s hairstyle, and asks, “What the fuck is going on?” But the answers he provides obfuscate as much as they entertain, and the mystery of these lovers’ journey remains hidden after the film ends. Existential questions are posited. Expressions of love are made. Jack shows his ex his view of Paris. It is lovely. The whole film is stylized like a perfume commercial but suffused with the sense of melancholy endemic even to Anderson’s lesser works, of which “Hotel Chevalier” unmistakably belongs. “Hotel Chevalier” is willfully oblique in a way that is as mysterious and seductive as it is enigmatic.

It’s all lovely and sad and stylized in a hermetic, airless fashion, and it works much better as a mood piece and a prologue than as an exercise in storytelling. But for all its faults and strengths, it’s 13 minutes of Wes Anderson in Wes Anderson’s world, so it certainly has a whole lot going for it besides Portman’s naked posterior (though it would be disingenuous not to concede that that particular element of the film is aesthetically pleasing as well).