Christopher Walken in The Country Bears 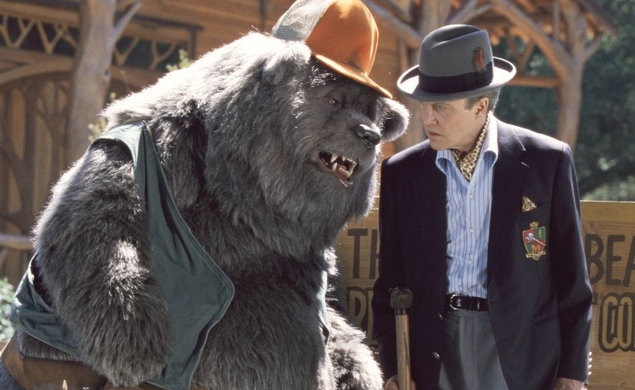 Christopher Walken is a wild card, a live wire who can invariably be counted upon to lend an electric frisson to any film he’s in, no matter how insane or grotesquely commercial. Consequently, he offers a bounty of options for a Staunch Characters entry. This post could easily have been about his tap-dancing pimp in Pennies From Heaven, or his Midwesterner from outer space in Annie Hall, or his incongruously sexy actor/womanizer in Paul Mazursky’s criminally underrated Next Stop, Greenwich Village, or even his weird shamus in Gigli.

But instead I’m going to highlight a performance and a film befitting such a glorious anomaly of an actor and human being: Walken’s portrayal of evil banker Reed Thimple in 2002’s The Country Bears, a live-action feature adaptation of the once mildly popular Disney World attraction The Country Bear Jamboree, and a film that would be utterly worthless without Walken’s signature weirdness.

For the most part, The Country Bears is a shockingly glum take on the Behind The Music formula: A once wildly popular group of country-loving carnivores afflicted by everything from egos to honey (read: crystal methamphetamine) tries to pull it all together for one big show that will raise the $20,000 necessary to save Country Bear Hall, the down-home hootenanny where they got their start. The pacing is molasses-slow, particularly for a film aimed at very small children, the Country Bears’ character design is creepy and borderline repulsive—half-man, half-bear, and all nightmare—and the jokes are few and far between. But the film comes roaring to life every time Walken steps onscreen in a white suit and cravat that highlights his grinning, fundamentally shark-like nature.

Seemingly no one could dislike these country bumpkins, but Walken’s character despises them with a ferocity most reserve for Nazi serial killers. His every word drips disdain. He glares at them as if they were and are a lower life form because, well, they are. And in his big scene, Walken takes orgasmic joy in dropping a big-ass anvil on top of a scale model of Country Bear Hall while professing sarcastic horror. “Oh no!” He screams with undisguised glee. For reasons known only to him, he does much of this symbolic destruction of Country Bear Hall in his underwear, adding linguistic flourishes with each new act of minor destruction. “Oh no! Country Bear Hall has been crushed,” he proclaims the way a particularly partisan baseball announcer might announce that their team has won the pennant. Walken’s unseemly joy in destruction begins to take on an almost musical rhythm, like he’s composing a rapturous ode to the underlying creation endemic in destruction. (If I were a DJ, I would sample Walken enthusing, “Oh no! Country Bear Hall has been crushed” in literally every song I worked on.)

Eventually, the film provides an origin story for Reed’s hatred of the bears and his need to destroy all they have created: 30 years earlier, he was an artist himself (of sorts), an armpit farter who was bested by the Bears in a big talent show.

This backstory is as unnecessary as every moment onscreen that doesn’t prominently feature Walken, because Walken, at his best, does not need motivation or a rationale or a backstory: He just needs that signature Walken madness. While The Country Bears is certainly not the film Walken will be remembered for—hell, it may be the film he is remembered for least—it does illustrate his ability to infect gleeful, glorious, giddy madness into even the most dire of commercial products.