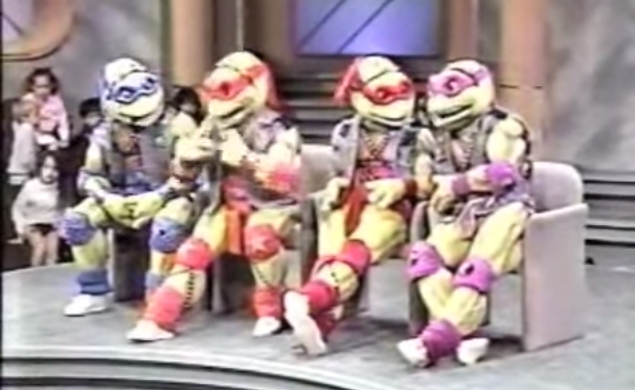 As the host of The Oprah Winfrey Show, Oprah Winfrey attained a once-unimaginable level of power and responsibility. But with that great power came great compromises. Some days Winfrey got to talk to Nelson Mandela or turn the world onto the teachings of Eckhart Tolle. Other days involved standing in front of a gaggle of over-excited children, their minds cloudy with adrenaline and sugar, and asking actors dressed up like giant, martial-arts-adept anthropomorphized turtle-men, “Hey, dudes, I hear you have a cartoon and everything!”

Ever the trooper, in 1990 Oprah allowed her show to become an hourlong informercial for the Teenage Mutant Ninja Turtles’ stage show, which was featured in an earlier Mutations entry. Winfrey is on hand to lob the softest of softballs at the quartet of mutated reptiles.

The Turtles all speak like what they probably were: Surfer roadies who have ingested way too much cocaine and have been assured that if they just keep spouting catchphrases like “radical” and “cowabunga” often enough, it does not matter what they they say, or whether it makes sense.

At one point Shredder, the effete, fan-favorite villain who looks and acts like Paul Lynde cosplaying Tetsuo The Iron Man, shows up just to sass the Turtles. His appearance is eloquently set up by Oprah asking, “Now I understand that on these concert tours you’ve been having problems because of Shredder,” who answers with an exquisitely bitchy, “I’ll follow you around this country to destroy your tepid turtle sounds!” That last claim makes him seem less like a supervillain to be feared than an unusually dedicated heckler.

The Turtles perform some more songs and deliver more excruciating banter. It’s a clumsily choreographed production and, because there are children involved, there are occasional moments of unintentional, wonderfully embarrassing weirdness, as when Oprah asks a little boy if he “dug” the Turtles’ album and he scrunches up his face and says “no.” There’s also an awkward moment touching on the topic of interspecies love when Oprah asks, “Do you sometimes wish April was a turtle?” In response, one of the turtles claims of April, “I’ve been trying to lure her into an interspecies relationship for months now” before cryptically claiming, “she can’t hold her breath long enough.” I invite you not to contemplate that sentiment a second longer than is absolutely necessary.

In a moment that induces pity for everyone involved, a middle-aged woman regales Oprah with the story of how she got to get into the show with her children and proved her dedication by wearing Teenage Mutant Ninja Turtles underwear on her head and walking backwards down Michigan Avenue. When the Turtles are asked about their favorite kind of pizza and they reply, “Pizza Hut! It’s in our contracts!” It’s sad, not funny, because it’s true: Pizza Hut really was the official pizza of the Teenage Mutant Ninja Turtles and they weren’t about to go off brand in such an important venue.

In the end, this was just one show of many, and Winfrey was able to maintain her dignity even while stomping through the pizza-laden sewers of scuzzy cross-promotion. So while I would not encourage anyone but the morbidly curious and/or professionally obligated to watch the whole hour, I do recommend ordering the transcripts so that you can and your friends can reenact this magical meeting any time you wish.

Just send three dollars and a self-addressed envelope to: