Mutations: The Coneheads briefly starred in a Rankin-Bass cartoon series 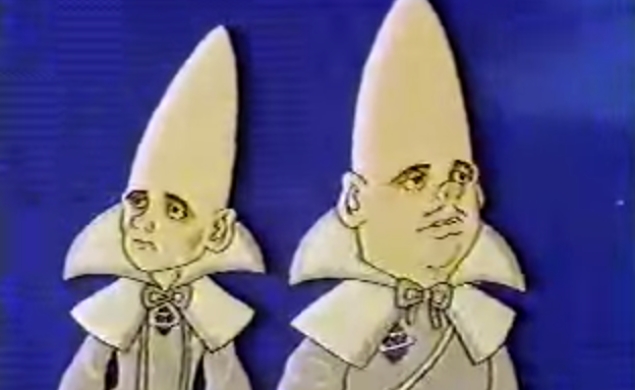 Saturday Night Live sketches featuring the Coneheads were about as ambitious as the show got, both during its golden age and beyond. Dan Aykroyd didn’t just conceive of the usual set of recurring characters and agreeably perverse catchphrases. (Only a comedy cyborg like Aykroyd could get teens spouting gloriously stiff phrases like “maintain low tones” and “consume mass quantities.”) He conceived of an entire science-fiction universe for Conehead Beldar, his wife Prymaat, and their daughter Connie that began with them being dispatched to capture Earth for their alien overlords on their home planet of Romulek, and ended up with them living the undignified but strangely homey life of run-of-the-mill, if bizarrely deadpan, earthlings.

In that respect, the Coneheads served as a wry commentary on the immigrant experience at its most extreme and strange. One of the only pleasures of the late-in-the-game 1993 feature film adaptation of The Coneheads lies in the way co-writer and star Aykroyd filled out the details of the Coneheads’ world, particularly their home planet of Remulak. Aykroyd seemed to imagine that audiences would be so blown away by the Remulak sets that they wouldn’t even notice what a barren, laugh-free desert the film really was.

But a decade before The Coneheads became a flop movie in 1993, Yuletide and stop-motion animation specialists Rankin-Bass (the studio behind Rudolph The Red-Nosed Reindeer, Frosty The Snowman, and other holiday staples) recruited a murderers’ row of Saturday Night Live talent to resurrect the characters for an animated incarnation, which aired as a primetime special. Written by Al Franken and Tom Davis and executive-produced by Lorne Michaels, it was also billed as, to borrow the opening credits agreeably stiff turn of phrase, “Starring the talents of” Dan Aykroyd, Jane Curtin, Laraine Newman, and Tom Davis.

Originally conceived as a pilot, The Coneheads covers an awful lot of ground in 22 minutes. It has the feel of an animated sitcom, complete with an overly generous, perversely random laugh track, opening credits with a funky Sanford & Son vibe, and applause at commercial breaks designed to simulate the satisfaction of an unseen but apparently easily impressed studio audience.

Here’s the first of three parts, all of which are available on YouTube:

The episode begins on planet Remulak, with the Coneheads being dispatched to travel to and conquer an insignificant planet called Earth and use its slave labor as miners. The intrepid travelers end up getting lost, however, and instead of immediately taking over Earth, they end up repairing old beat-up television sets for a scruffy old man with secrets of his own. Beldar turns out to have a remarkable innate gift for repairing TVs, which just feeds into the racist stereotypes that space aliens who speak in robotic monotones are always good with electronics.

The Coneheads provides an origin story not just for its title characters but also for their oft-stated contention that they are “from France.” Beldar’s new boss tells him, “My grandfather came over from France and that’s all anyone needs to know,” and Beldar decides that that will be anyone will ever need to know about his family origins as well.

From there, The Coneheads chronicles with impressive economy the conception, birth, and maturation of the central couple’s daughter Connie, and their domestication and assimilation from world-conquering extraterrestrials to cozy New Jersey types. The juxtaposition between the Coneheads’ comically literal and technical way of perceiving the world and that world’s dumpy domesticity remains the core of the comedy, as is the characters’ never-commented-upon oddness. The Coneheads were already such rigidly stylized live-action cartoons on SNL that the shift from live-action to conventional animation is surprisingly organic, or as organic as anything as purposefully inorganic as the Coneheads could possibly be.

The Coneheads contains its share of Small Wonder-style groaners, like Beldar crawling under a table after his new boss informs him his payment will have to be done under the table. (Silly Beldar, he does not understand Earthlings’ propensity for wordplay, metaphor, turns of phrase, and cliches!) But for a show aimed squarely at kids that never became a series despite the talent involved, The Coneheads pilot/special is surprisingly solid. It doesn’t aspire to the sophistication or wit of something like Rocky & Bullwinkle or The Simpsons, but as a Saturday-morning cartoon built around a familiar property, it’d certainly be a cut above most such shows. It’s no tragedy that The Coneheads never went to series, but this pilot provided an intriguing glimpse of what might have been.