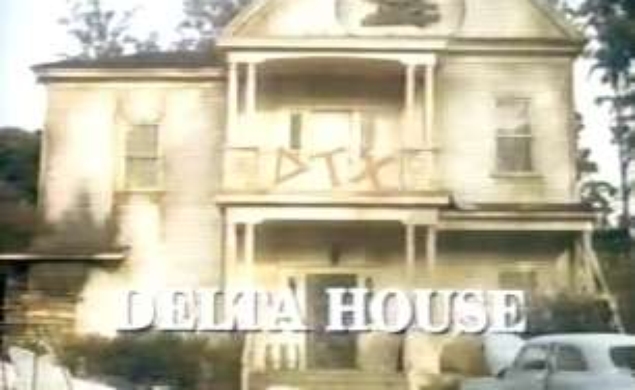 As far as television adaptations of movies go, Delta House, the small-screen version of National Lampoon’s Animal House, had a lot going for it. It was executive-produced by Ivan Reitman and Matty Simmons, who also produced Animal House, its writers included a prolific young National Lampoon wisenheimer named John Hughes, as well as The Player screenwriter/author Michael Tolkin, and the cast was full of Animal House alumni, including Stephen Furst as hapless pledge Flounder, Bruce McGill as D-Day, James Widdoes as Hoover, and most impressively, the great character actor John Vernon as the villainous Dean Wormer.

What Delta House did not have, however, was John Belushi, whose contributions to the film cannot be overstated. Animal House may have been an ensemble film, but Belushi was its heart and soul, its center and core. As if to acknowledge that no one could fill Belushi’s “college” sweatshirt (not even James Belushi), the television show cast Josh Mostel not as John “Bluto” Blutarsky, the role Belushi played in the film, but rather as his lookalike, act-alike brother Jim “Blotto” Blutarsky. In that respect, the overmatched Mostel was a poor substitute for two comedy legends, Belushi and his own father Zero, star of The Producers.

The returning cast members and producers should make Delta House seem more authentic. Instead, it instills a weird sort of cognitive dissonance as familiar faces from the film itself interact with ersatz pretenders occupying the roles of Otter (Tim Matheson in the film, Peter Fox in the show), Pinto (Tom Hulce in the film, Richard Seer in the show), and others.

The John Hughes-written second episode of Delta House (currently the only one currently available on YouTube) begins with a retro theme song from Meat Loaf collaborator Jim Steinman, one of pop culture’s finest purveyors of vaguely Camelot-era schlock, and National Lampoon veteran Tony Hendra, before introducing the episode’s premise. The Deltas are playing a casual game of football when they discover that despite his blimp-like physique and apathy toward anything but consuming mass quantities of food, Blotto is an instinctive football-playing prodigy who punts the ball an impossibly long distance without even trying, though he also kicks it so hard it causes the ball to deflate and land in front of a clearly impressed Michelle Pfeiffer, credited only as “The Bombshell.” We all know that there are no rules preventing donkeys from playing football, but what do the rule books say about kicking balls so hard they bust? We may never know.

Dean Wormer conveniently happens to be staring out his window as the football soars past, and hatches a scheme to force Blotto to play on the varsity team by threatening to send him to military school for his various misdeeds. Vernon is, not surprisingly, the best thing about the show. He takes exquisite, infectious pleasure in language, pouring oily menace and sinister superiority into wonderfully wordy dialogue in which he simultaneously decries and extols Blotto (everyone’s second favorite Blutarsky!) as “That anthropoid down there, that distant cousin of man (who) will save this team from their usual disgrace.”

Blotto is swayed by the dean’s blackmail, but he performs all too well, literally running roughshod over the other team (he’s not only the world’s greatest kicker, he’s also an offensive and defensive dynamo) and sending nearly the entire opposing team to the hospital with injuries of various severity. A conscience-stricken Blotto refuses to play any further, so the fraternity (which is really into winning football games all of a sudden) invokes a surrogate-brother clause and convinces Flounder to pretend to be Blotto and take his place on the field. This leads to a surplus of wacky, football-themed slapstick involving the zany pranksters of Delta House sabotaging the other team, through methods that include convincing Pfeiffer’s “The Bombshell” to distract the other team by taking off her clothes.

In the end, the “surrogate brother” plot ends up feeling like a metaphor for Delta House itself, a cynical and pandering attempt to pass off a shabby imitation as the real thing. Oh sure, Delta House and Animal House may look alike, and have much of the same cast and crew, but there’s a world of difference, quality-wise, between the two, and I write that as someone who finds Animal House kind of racist, sexist, and thoroughly overrated, albeit filled with inspired moments.