Scenes From The Departed: L.M. Kit Carson captured Dennis Hopper at the height of his charismatic insanity 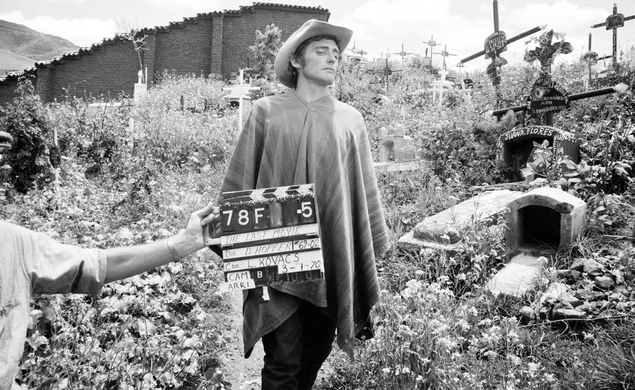 Scenes From The Departed is an ongoing feature that revisits a film from the career of the recently deceased to explore what it says about the artist’s life and work.

L.M. Kit Carson, who died on Monday at 73, had a fascinatingly eclectic career that included starring in the seminal faux-documentary David Holzman’s Diary, writing a Breathless remake starring Richard Gere, penning the screenplay for both Texas Chainsaw Massacre 2 and Paris, Texas (as well as the little-loved Freddy Vs. Jason-style crossover sequel The Third Chainsaw Massacre In Paris, Texas), mentoring the Wilson brothers and Wes Anderson, and co-producing Bottle Rocket.

But Carson only co-directed a single film, one that’s largely gone unseen, despite its monomaniacal focus on one of the most magnetic and infuriating figures of the New Hollywood of the late 1960s and early 1970s. 1971’s The American Dreamer is ostensibly about Dennis Hopper making The Last Movie, his long-gestating and ill-fated dream project. But one of the film’s many unfathomable perversities is that it probably contains about 10 times as much footage of Hopper talking about his sexual fantasies, acting out his sexual fantasies, pontificating about the nature of sexuality, and jabbering on and on about being a cunnilingus-obsessed male lesbian as it does Hopper actually working on or talking about The Last Movie.

Despite the deeply personal nature of The Last Movie (and projects don’t get much more personal, for better or worse, than The Last Movie, whose colossal failure led Hopper to flee Hollywood for close to a decade), it appears that the film was damn near the last thing on Hopper’s mind when The American Dream was being filmed. The Hopper that emerges in front of Carson and co-director Lawrence Schiller’s camera is an untamed, rampaging id without a filter or even the faintest hint of self-consciousness—the artist as a drugged-up, sex-crazed, liquor-swilling maniac. He’s a heavily bearded, cowboy-hat-wearing outlaw who is half guru, half artist, and 100 percent debauched libertine. He’s a man who cannot stop thinking about sex, talking about sex, and having sex on camera, most explicitly in a threesome with two women in a bathtub, and in some weird group-massage scenario with a softball team’s worth of naked and nearly naked beauties.

Hopper is desperately in love with the sound of his own voice, speaking in a free-form, beatnik-hippie stream-of-consciousness ramble that’s hypnotic and obnoxious in equal measure. With his long hair, rail-thin body, and madman beard, he bears an uncanny resemblance to Charles Manson. In one of Hopper’s many windy monologues, he recounts visiting Manson in prison recently, though considering Hopper’s state, it’s unclear whether this was an actual visit or more of the “Hopper dropped a lot of acid and was visited by a floating, technicolor Manson-like figure” variety. According to Hopper, Manson told him that he’d been “acting out a movie all his life,” albeit one with no cameras to document it. That idea dovetails all too conveniently with the premise of The Last Movie, which cast Hopper as a Hollywood crew member who becomes involved with a South American tribe that decides to make their own “movie” with fake cameras but real violence, as well as David Holzman’s Diary and The American Dreamer itself, which explores the boundaries between performance and reality, and questions whether that division matters at all. The American Dreamer suggests that Hopper was actually playing a radically toned-down version of himself in his comeback role in Apocalypse Now.

The American Dreamer is a less appropriate title than Everything You Didn’t Want To Know About Dennis Hopper’s Sex Life And Wouldn’t Ever Think To Ask. For those with a bottomless tolerance for self-indulgence and an enduring fascination with the 1970s Hollywood, The American Dreamer has a certain druggy, moody, pseudo-poetic appeal, though for all of Hopper’s talk about being an artist and a social revolutionary, everything comes down to a sex. Sex also provides some of the film’s funniest moments, like when Hopper watches two dachshunds furiously humping and observes, “Those dogs have more sense than we do and they don’t know anything about art,” or when a Playmate pontificates about art and Hopper makes no effort to hide the fact that he’s staring at her chest and ignoring what she’s saying.

It’s hard to say whether Schiller and Carson are locked into Hopper’s endless self-absorption, or simply giving him the space and freedom to implicate himself as a creepy pervert in hippie garb who seems less interested in making art than in haphazardly starting his own sex-and-drug cult. Carson’s sole co-directorial effort is utterly revealing, but it would be more resonant and enduring if it focussed on Hopper the artist at a fascinating and complicated crossroads in his life and career, and less on his insatiable libido.