The Dissolve on... our picks for the all-female Ghostbusters 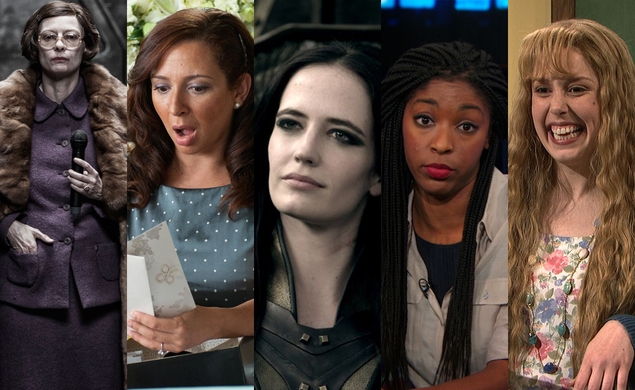 Dan Aykoyd’s dream is finally coming true: They’re making another Ghostbusters. But rather than blackmailing Bill Murray into playing Peter Venkman one more time, Paul Feig’s new film will reinvent the franchise from square one, with a cast of women in the roles of the ghoul-hunting heroes. Feig says none of the leads have been chosen yet, so the staff of The Dissolve decided to butt into his business and offer a few helpful suggestions. Although there’s a good chance the new characters won’t closely resemble the old ones, we decided to try to pick a group of female Ghostbusters that could faithfully reproduce the chemistry and character types of Venkman, Stanz, Spengler, and Zeddemore. Here’s who we chose:

Tilda Swinton: The most crucial question that comes to mind when casting the new Ghostbusters: Who plays Peter Venkman? Who could possibly step into Bill Murray’s sad clown shoes and undercut this effects-heavy blockbuster comedy with the necessary sarcasm and irreverence? I didn’t even bother doing a mental inventory of comedic actresses who possess Murray-like qualities. I just skipped right to the not-so-obvious but absolutely perfect choice: Tilda Swinton. Swinton has appeared in two comedies already this year—The Grand Budapest Hotel and Only Lovers Left Alive, and maybe a third in Snowpiercer, where she’s very funny—and she specializes in the same withering deadpan, often with a sharp patrician air. It’s not for nothing that Jim Jarmusch and Wes Anderson have cast Swinton and Murray in their movies. They’re kindred spirits. —Scott Tobias

Eva Green: To replace the late, great Harold Ramis as Egon Spengler, we not only need someone who can play deadpan intellect, but who shares a similarly lanky physicality. Google tells me that Eva Green is only 5 foot 6, but in every movie I’ve seen her in, she seems to tower over her co-stars. That’s probably more screen presence than physical stature, but that’s not a bad quality to bring to a part, either. Green hasn’t done many comedies to date—although she was in Tim Burton’s Dark Shadows, which had a Ghostbustersish mix of horror and comedy—but Egon’s not really the type of character who delivers tons of zingers anyway. He’s the aloof intellect who drops the occasional wry quip, something that seems right in Green’s wheelhouse. Certainly Green’s Egon would have more sex appeal than Ramis’, but if she she could keep a straight face through that scene in 300: Rise Of An Empire where she had a sex-fight with someone, she’s got the right demeanor for the part. The idea of a tall, intelligent, gorgeous woman (who’s not afraid to look a little silly onscreen) talking about spores, molds, and fungus sounds quite appealing. —Matt Singer

Vanessa Bayer: If we’re recruiting from the ranks of the current Saturday Night Live staff, I’d pull in Vanessa Bayer, in part because she always makes me laugh and in part because she does dumb-but-enthusiastic better than almost anyone. That makes her a natural for Dan Aykroyd’s Ray Stantz slot (which might sadly doom her to talking endlessly about the next next generation of Ghostbusters 30 years from now.) But maybe I’m thinking too narrowly. It’s not like this remake/reboot/whatever has to be all that beholden to the original. And if Bayer doesn’t get a slot on the team, maybe Janessa Slater can be their media coach. —Keith Phipps

Jessica Williams: I don’t watch The Daily Show as religiously as I used to, but I am perpetually blown away by the irrepressible energy of correspondent Jessica Williams. She’s one of the most consistently hilarious aspects of that consistently hilarious show. Williams is such a confident, assured presence that it can be hard to believe she’s still only in her mid-20s, and was actually born the year Ghostbusters II came out. Williams hasn’t done many movies—according to IMDB, her only proper film role is as “African American spa worker” in Delivery Man, a role I suspect might not have been essential to the narrative—but I think she would be perfect for the Ghostbusters reboot. With a project as big and special-effects-intensive as Ghostbusters, it would be very easy for the actors to be overshadowed by the special effects, which is why it’s essential to cast performers with fresh, offbeat, unpredictable personalities (folks like Rick Moranis, Bill Murray, and Annie Potts), and Williams sure has one of those. This could be a big, breakout role for a talented newcomer worthy of one. —Nathan Rabin

Maya Rudolph: That said, there’s no particular reason we need to be thinking in terms of a four-woman team who’ll specifically fill the Spengler/Stantz/Zeddmore/Venkman roles. In fact, it’d probably be better if the new team veered away from that instinct entirely, to prevent one-on-one performance comparisons with some iconic comedy vets in iconic roles. So why not a five-woman team? And for the fifth member, why not someone who specializes in standing a bit outside the group and commenting on it from a little dubious distance? Even as a protagonist, Rudolph always tends to feel like she’s standing five feet away from the action, raising an eyebrow and waiting for someone to prove to her that the current endeavor is worth her time. That seems to me like a good attitude toward this whole film project. Rudolph is a great actor, and sharply funny, but she also brings in just a bit of intelligent reserve, and that’s what I want in my Ghostbusters reboot.—Tasha Robinson

Maria Bamford: The casting speculation for Paul Feig's Ghostbusters has focused entirely on the Ghostbusters themselves, which makes sense, given the title of the film and all. But I’d like to look beyond that, to the creatures those ladies will be busting. Presumably there will be a fair number of CGI-assisted beasties in Fieg’s Ghostbusters as well, and while we don’t yet know how closely this reboot will follow the plot of the original, once the idea of a Maria Bamford-voiced Gozer popped into my head, I couldn’t shake it. Bamford has a long history of doing wonderfully weird voices for film and television (mostly television), and I would love to see her apply those talents to whatever computer-generated evil forces the Ghostbusters will have to contend with. As her consistently great, hilarious work on Adventure Time proves, Bamford’s capable of voicing characters that range from sweet to scary to just plain weird, and I have the utmost confidence that she could deliver a voice performance that finds the middle ground between funny and legitimately scary that Fieg says he’s shooting for. —Genevieve Koski