Nathan Rabin Vs. The IMDB Top 250: In The Mood For Love 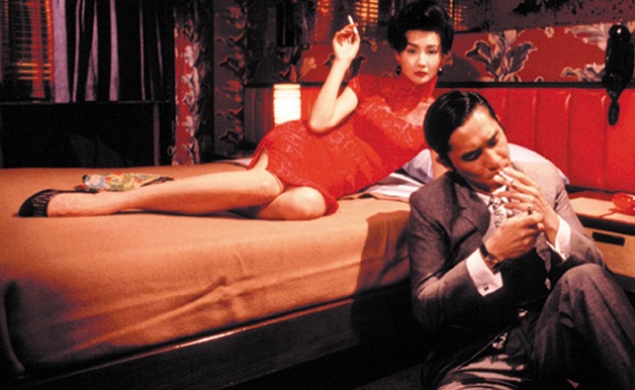 I remember falling in love with the voice of Nat King Cole as a child, specifically his version of “Nature Boy.” It was at once comforting and soothing, yet hopelessly mysterious and glamorous. It belonged to an adult world I very much wanted to be a part of, where everyday people dressed gorgeously, looked beautiful, smelled of lilac, and conducted themselves with effortless grace. I sensed at the time that, at its core, Cole’s velvet baritone was about sex, but not the feral grunting of pornography or the clumsy coupling of sweaty teenagers in the backseat of a car. The sex in Cole’s voice, and in his dazzling and debonair persona, was about sensuality and class, a satin whisper rather than a shout or a moan.

In other words, the sex in the music of Nat King Cole was like the sex of Wong Kar-Wai’s 2000 film In The Mood For Love: all the more seductive and, well, sexy for being suggested rather than stated. That makes sense, as writer-director Wong uses Cole’s music as an invaluable component of the film’s elegant, sad world. In The Mood For Love is one of the sexiest movies ever made, as well as a stirring affirmation of the notion that there is nothing sexier than repression, that what can be seen is never half as exciting as what can only be imagined.

The film stars Tony Leung as Chow Mo-wan, a writer in 1962 Hong Kong who stumbles into a flirtation with neighbor Su Li-zhen (Maggie Cheung) as a way of whiling away the long hours while their respective spouses are away and alleviating their loneliness. From the beginning, these two impossibly beautiful people are blessed with such explosive chemistry, but they’re restricted by the codes of the day, and their respective marriages, from indulging their carnal passions. Instead, these two star-crossed lovers tiptoe around the emotions they feel but cannot say until each moment they’re not able to scream their love from the mountaintops becomes an eternity of torment. Yet In The Mood For Love is not ultimately about plot or dialogue. It’s about beauty and images. I don’t know that I have ever seen a film so lusciously tactile or with such exquisite textures.

In The Mood For Love does for slow-motion sensuality what John Woo did for slow-motion violence. Cheung doesn’t walk so much as glide, as if driven by some divine internal motor. The way Cheung’s hips sway ever so gently in her tight-fitting dresses as she saunters down a hallway is hypnotic in its blistering yet restrained eroticism. But it isn’t just the impossible beauty of the leads that makes In The Mood For Love such an immersive sensual experience. Wong’s film benefits from a rare alchemy of sight and sound. Those exquisite textures come as much from Michael Galasso’s score and a brilliant selection of songs sung by Cole as it does Christopher Doyle and Mark Lee Ping-bin’s cinematography.

I liked In The Mood For Love when it came out, but I don’t know that I really got it until I watched it again for this project. The me of 14 years ago found it a little on the slow side, whereas rewatching it today I found its languid rhythms utterly beguiling. The movie reconnected me with the way I felt when I first heard Cole’s voice and felt like I had gained entry to a lost world. I fell in love with the movie and felt like I was watching the most beautiful, most romantic and most haunting film ever made, when, to be brutally honest, it’s probably merely one of the most beautiful, romantic, and haunting films ever made.

I drifted through this rewatch like a dream I never wanted to wake up from, and it’s easy to see why the people who rated In The Mood For Love the 239th best film of all time would want to return to this world of beautiful, transcendent sadness over and over again. Despite its modest scope, In The Mood For Love feels like a magnum opus from one of the all-time greats, and while it’s likely that the folks involved will continue to do great work, it’s doubtful that anything they do will approach the timelessness of their work here.

In The Mood For Love’s IMDb ranking: Too low

1. In The Mood For Love
2. Network
3. Pirates Of The Caribbean: The Curse Of The Black Pearl
4. Slumdog Millionaire