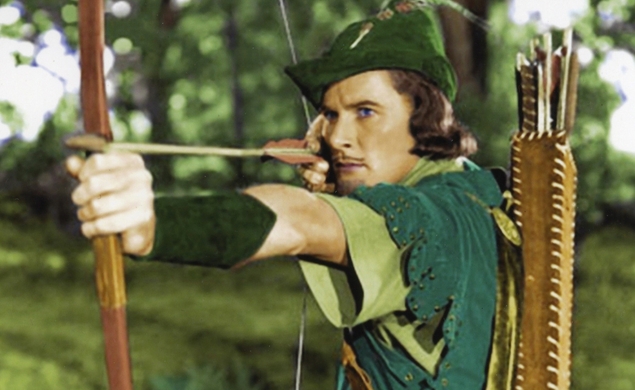 There have been many movie versions of Robin Hood through the years. Errol Flynn in the 1930s. The Disney cartoon of the 1970s. Kevin Costner in the 1990s. Russell Crowe just four years ago. The dozens of variations have exhausted nearly every possibility of the property: funny Robin; serious Robin; animated Robin; even old Robin. But Sony just spent a whopping $1 million for a new Robin Hood pitch from writers Cory Goodman and Jeremy Lott for a new variation: readily franchisable Robin.

Per THR, Sony was interested in Goodman and Lott’s pitch, titled Hood, because of two “magic words:” “universe” and “Avengers"”

“The plan is to make a series of movies focusing on the outlaw archer and his band of Merry Men: Little John, Friar Tuck and Will Scarlett. One could say they were the superhero team of England’s Middle Ages.”

“Merry Men Assemble! For at least eight interconnected movies, with possible spinoffs after that!”

I mean, sure, who doesn’t love an richly woven multi-film saga? What better way to rob from the poor to give to the rich (that’s how that goes, right?) than by convincing people to shell out $100 over half a dozen films to get a single story. No wonder Sony’s so keen on the idea.

Does anyone really want to see a Friar Tuck movie, though? (“This summer: Get ready to give a Tuck.”) I confess the idea of a fresh and unique Maid Marian movie sounds kind of intriguing, but I’m having a hard time mustering much enthusiasm for a large batch of films about Robin Hood’s buddies. Right off the top of my head, I couldn’t even tell you anything about Will Scarlett. Does he become The Scarlet Pimpernel?

Just kidding; I know that’s not true—I did tons of research about him while preparing my pitch for Scarlet(t), which I’m currently fielding offers for. I see this as a potential universe of properities, all starring various people named Scarlet or Scarlett. Will Scarlett, the Scarlet Pimpernel, Scarlett O’Hara, Scarlett Johansson from The Avengers, and so on. Starting price is $500,000. Who’s interested?