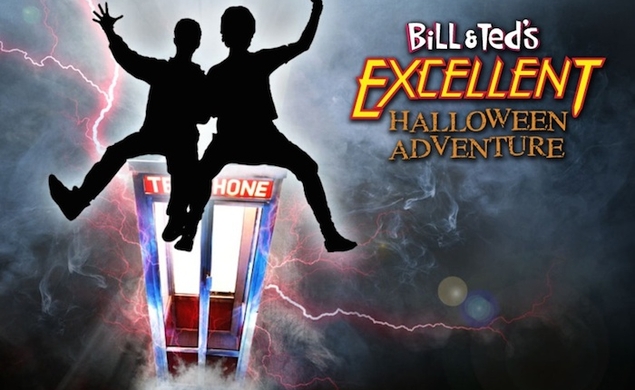 The cinematic adventures of Ted “Theodore” Logan and Bill S. Preston Esq. concluded with 1991’s Bill & Ted’s Bogus Journey, though a third film is reportedly in development. The films spun off a pair of television adaptations—one live-action, one animated—as well as a video game that was terrible even by the low, low standards of notorious schlock-merchant and beloved-property-defiler LJN. The film also spawned a live-action show that, since 1992, has been part of Universal Studios’ Halloween Horror Nights.

Last year, Vice ran an article documenting the infinite horrors of the 2013 “Halloween Adventure.” That piece sparked a flurry of complaints from GLAAD and other gay-rights organizations over gags like a bit where Superman turns into a mincing, lisping stereotype after being sprinkled with “fairy dust.” The outcry led to that year’s show being cancelled or, more accurately, put out of its misery. The 2013 show is no longer on YouTube. (A YouTube link in the Vice piece bears the sad message, “‘Gay Superman in the Bill an…’ This video is no longer available due to a copyright claim by Universal Studios Hollywood.”) The Vice piece, however, gives a good indication of its content, and there’s plenty of horrifying footage of previous shows available online. For example, a YouTuber with the handle “Amusement Planet” uploaded a nearly 42-minute clip capturing the 2012 “Bill & Ted’s Excellent Halloween Adventure” at Universal Studios Hollywood for posterity. And does it ever live up to its reputation as the worst of the worst. It’s hard to believe that this version of the Bill & Ted stage show that somehow didn’t invite a firestorm of richly merited criticism.

Despite the prominent place Bill, Ted, and Halloween have in the title, the extravaganza more closely resembles a horrifically successful attempt to channel the lowest-common-denominator idiocy and pop-culture-reference-as-punchline aesthetic of Date Movie and Epic Movie hacks Jason Friedberg and Aaron Seltzer. It’s practically Meet The Spartans Live: the laziest punchlines of 2012 spill forward in a semi-incoherent assault of mindless spectacle.

The stage show’s thin premise finds Bill and Ted competing in a pop-culture Hunger Games against a coterie of the most-Googled pop-culture phenomena of 2012, from Catwoman and Bane to Agent J of Men In Black 3 to JWoww and Snooki of Jersey Shore, which apparently was still a thing back in 2012. In a characteristic gag, a puppet resembling Fozzie Bear is hauled out onstage by two clearly visible puppeteers in black suits to deliver jokes like, “Did you hear about Chris Brown’s new website? It’s receiving more hits than Rihanna?”

I suppose a joke like that is technically protected under the U.S. Constitution as free speech, under the grounds that it’s theoretically a parody of Fozzie (and Chris Brown, I suppose), and not an infringement on Disney’s intellectual property. But watching this horror show made me hate the Bill Of Rights and the concept of constitutionally protected parody (and what the heck, the whole notion of free speech) in a way I never imagined possible.

Almost nothing in “Halloween Adventure” meets the level of parody, let alone satire. The show, for instance, depicts Catwoman as a racist caricature who yells lines like, “I got priors!” and “Mama’s gotta get paid!” and is confused for Whoopi Goldberg upon her exit. Justin Bieber and John Carter (Of Mars) lookalikes are both brought out for jokes rich in pedophilic overtones. The ancient pedophile Herbert from Family Guy is used for more leering innuendo, and an endless segment finds Bieber hiding out from the world in a closet solely so other characters can ask him to come out of the closet.

As “Bill & Ted’s Halloween Adventure” proceeds, it makes less and less sense. It’s dizzying in its multimedia assault, hitting audiences with a nonsensical barrage of pop-culture references, hit songs, and nearly naked men and women. (It was the year of Magic Mike, after all, as well as one of those years when scantily clad female singers were somewhat popular.) After a while, it becomes completely disengaged from anything resembling logic, and gives itself over to complete abstraction. By the time Bill and Ted start dancing to “Gangnam Style” alongside a Psy lookalike and Mitt Romney, Barack Obama, and Abraham Lincoln begin mixing it up onstage, any pretensions to coherence have been abandoned.

How could a show like this have happened? Is there really an audience for this? The grosses of Friedberg and Seltzer’s films seem to suggest there’s an audience for this horseshit, though as is generally the case, if you want to be really depressed by humanity, and particularly its taste in entertainment, there is no better place to visit than the comments on YouTube videos. Accordingly, this video has attracted comments like the following:

“the whole show was freakin awesome a very well put together show. I dont see why any one would have a problem with this show and why complain I don’t get it. What the Hell did Gay people cry about in this. ”

“too bad some gay people had to complain about offensive humor, and got the show canceled. way to ruin it for every buddy else guys.”

So what is more depressing: That a show like this exists, or that there’s an audience for it? Assuming there aren’t any neo-Nazi Bill & Ted-themed snuff-fetish films out there, this abomination is clearly the most bogus thing ever to come out of a most excellent and justly beloved film series. Meanwhile, Universal’s site suggests the show has returned for 2014. Will the people behind this affront to common decency have learned anything from the public shaming that greeted the 2013 show? Hopefully, though previous versions have provided little reason to trust the integrity of the people who transformed Bill & Ted from a fond memory to the vessels for hateful pop-pandering.