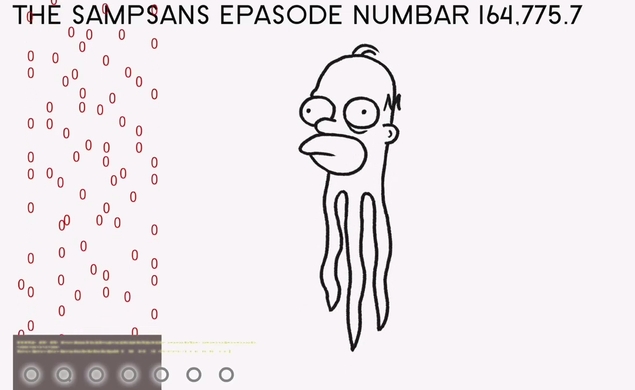 Now in its 26th season, The Simpsons has long since earned the title of the greatest sitcom in American television history—along with the title of the greatest sitcom in American television history to stay on the air the longest past its prime. In its heyday, The Simpsons episodes were miniature masterpieces of humor and sentiment; these days, they’re mostly just absurdist gags and a series of shark-jumping cameos, crossovers, and guest appearances from other directors and animators, who are brought in to create their own interpretations of the show’s opening credit couch gags (which keep the show relevant by getting shared on social media and sites like this one).

It’s easy to say these couch gags are a desperate attempt to breathe a little life into a formula that grew stale long ago. But when those gags are as bizarre and surreal as this one directed by indie animator Don Hertzfeldt, which appeared last night on the 26th season première, it’s hard to dismiss them:

Hey look! The acid I put in my morning coffee just kicked in!

That has to be one of the strangest things ever to air on broadcast television, and possibly one of the most subversive too. (Watch the Matrix-y text on the side of the screen for decidedly uncommercial messages like “Amusement Is Control.”). If The Simpsons does continue into the far future (and becomes The Sampsans), at least it’s giving exposure and airtime to brilliant animators like Hertzfeldt—whose It’s Such A Beautiful Day is one of the best animated movies of recent years (and is available to rent or buy for cheap on Vimeo).