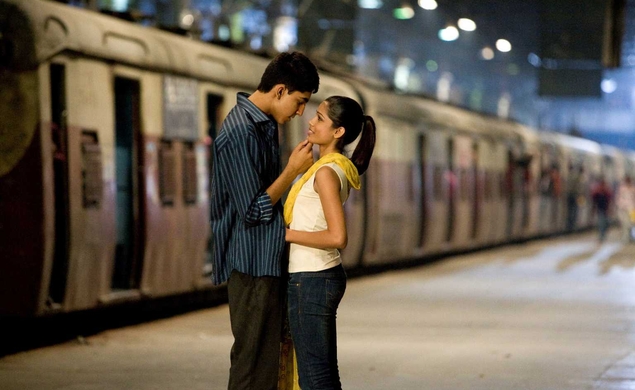 When you watch movies with an eye toward making year-end lists, as you do in my line of business, the normal standards do not apply. You’re sometimes not watching a film to see if it’s good or not. You’re explicitly watching movies to see if they deserve to appear on year-end lists. I’m working with a somewhat similar criteria here: Since every movie I’m writing about has been named one of the greatest films of all time by the public (or at least their proxy, the voters of the IMDb), the question is not whether they’re any good, but rather whether they deserve to be ranked among the all-time greats (at least on a list where Shawshank Redemption, ridiculously but predictably, registers as the best of the best, above even those mob movies Francis Ford Coppola made.)

When I saw Slumdog Millionaire for the first time for year-end consideration back in 2008, it was riding an enormous wave of deafening buzz and good reviews that would climax with eight Academy Awards, including Best Picture and Best Director. It was the dark horse that came out of nowhere and charmed critics and the public alike, and such a crowd-pleasing tale of triumph over adversity that I felt like an enemy of joy for being underwhelmed by it.

Would a second viewing, long after the initial wave of hype had passed, change my opinion? Would I fall victim to the film’s populist, ebullient charms this second time around? No, no I would not.

Trainspotting director Danny Boyle (and seldom-mentioned co-director Loveleen Tandan) and Full Monty screenwriter Simon Beaufoy’s adaptation of Vikas Swarup’s novel Q&A casts Dev Patel as the 18-year-old version of Jamal, a young man who grew up in colorful squalor on the streets of Mumbai. As the film opens, he’s on the verge of winning a fortune on the Indian version of Who Wants To Be A Millionaire? The host and the public can’t believe that a lower-class, uneducated call-center assistant who has spent seemingly his entire life being chased by malevolent authority figures through increasingly tragic milieus has amassed the kind of knowledge that would allow him to set records on a national game show. What they don’t realize is that every trauma that Jamal endured in his youth gave him the answer to a question being asked on the show. Slumdog Millionaire represents a screamingly literal affirmation of the notion that the lessons of poverty and suffering give people the tools to succeed in life, or to triumph on a cheesy game show.

The film alternates between contemporary sequences of a nervous but determined Jamal answering questions on the show, scenes of Jamal being tortured by classist police who think he must be cheating in order to triumph on a show where his societal betters habitually flounder, and flashbacks detailing how Jamal came to possess a specific knowledge base that overlaps exactly with the random questions he’s being asked. Slumdog Millionaire consequently offers two different styles of melodrama that I found equally busy yet empty: There’s the cheeseball tension of the game show, where the host plays up the suspense of every question and answer for maximum dramatic effect inside a studio that resembles a nightclub from the 1980s, and the overheated melodrama of a plot that sends Jamal and his similarly hardscrabble brother from one perilous scrape to another, always just a step or two ahead of complete oblivion. Boyle, working with cinematographer Anthony Dod Mantle, maintains a feverish level of emotional intensity that quickly becomes exhausting. Rewatching Slumdog Millionaire, I was surprised to find its inspirational tale of a pure-hearted innocent overcoming the ugly awfulness of a corrupt and savage world oddly dispiriting.

On a visual level, Slumdog Millionaire has much to recommend it. It’s kinetic to a fault, an adrenaline rush of imagery and energy with nothing underneath but a florid romanticism that attempts to transform Jamal’s crush on the scarred girl (played at various ages by Rubina Ali, Tanvi Ganesh Lonkar, and Freida Pinto) he became fixated on as a boy into a love for the ages. There are echoes of Dickens and old Warner Bros. melodramas in the film’s tale of desperate brothers from the wrong side of the track who pursue different paths, but given a music-video spin that has an immediate rush, but which I found empty and unsatisfying.

Slumdog Millionaire is overflowing with surface appeal, with dazzling colors, striking compositions, sensual textures, throbbing music, constant climaxes, and sexy young people full of dreams and fiery passions. The problem is that these pleasures are all on the surface, and I, for one, did not find them all that appealing, even the second time through. It’s a brightly colored contemporary fairy tale that masterfully played the emotions of an international audience, but just left me feeling manipulated.