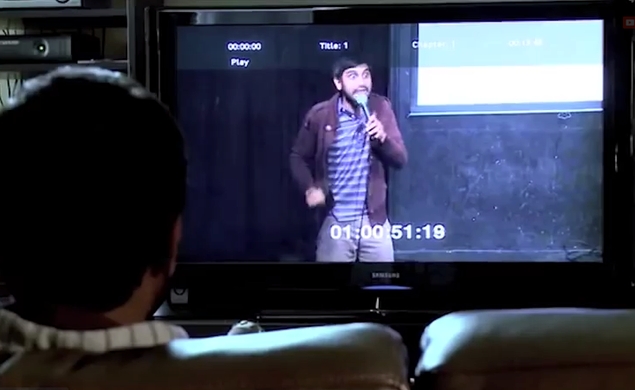 Mutations explores some of the lesser-known variations of familiar characters from movies.

Though it underperformed commercially and received mixed reviews, Judd Apatow’s regrettably titled Funny People has gone on to have a vibrant second life. If nothing else, the film gets referenced regularly whenever star Adam Sandler appears in the kind of high-concept, lowbrow idiocy his self-loathing, Adam Sandler-like character makes in the movie—which is constantly.

It’s worth noting that Sandler wasn’t the only comic heavyweight engaging in self-parody in Funny People. While Aziz Ansari’s breakout character from the film, Raaaaaaaandy (that’s eight As for those keeping score), is partially a spoof of pandering, profane arena comedians like Dane Cook or Chris D’Elia, who use deafening volume and frenetic movement to sell weak material, there’s also an element of self-parody, or at least self-criticism, to the character. Ansari is, after all, famously ambitious and savvy about building his brand, albeit not with the kind of monomaniacal focus that defines his fictional alter-ego.

Ansari and director/frequent collaborator Jason Woliner made a short mockumentary film chronicling Raaaaaaaandy’s curious ascent, which was included on the Funny People DVD and can be found in a shorter, condensed version on YouTube and Funny Or Die. The mockumentary, titled “Raaaaaaaandy,” provides an unlikely but weirdly plausible origin story for Raaaaaaaandy: He was an Los Angeles Police Officer who, in his own words, “shot a kid by mistake and got kicked out. It was messy.”

So he turns to stand-up comedy, and after two months of learning what obnoxious gimmicks and catchphrases would resonate most strongly with a mass audience (an exercise that takes the place “learning your craft” might in the evolution of a comedian with more/any integrity), he’s skyrocketing to the top. “Raaaaaaaandy” depicts the contemporary stand-up supernova as a borderline sociopath who charges other comedians (including Harris Wittels) for the privilege of opening for him, heckles them from the side of the stage, and then steals their jokes—or “upgrades” them, in the words of fellow comedians too intimidated to confront him.

In “Raaaaaaaandy,” the eponymous hack takes a hilariously incongruous scientific approach to his material, diligently studying sound files of his shows to ascertain, for example, that if he spins nonsensically six times during a poop-themed joke, he’ll get 20 percent more laughter than if he merely pantomimes pooping. (Like Joan Rivers, he has files upon files of jokes; unlike Rivers, many of them are about getting his dick sucked.) Raaaaaaaandy is forever spinning, hopping, and crudely pantomiming sex,  but his shows are also an assaultive multimedia experience featuring a DJ Ol' Youngin' (Brandon Johnson) who augments the comedian’s high-energy, low-intelligence material with reggaeton-style airhorns and a variety of wacky sound effects.

Raaaaaaaandy’s DJ seems as enamored of Raaaaaaaandy’s material as Raaaaaaaandy himself, and in a brilliant commentary on the empty attitude of aggressive comedians, demarcates the following three rules he and his boss share:

“Raaaaaaaandy” accomplishes the feat of making the material, personality, and pathological calculation of a terrible comedian and equally awful human being consistently hilarious. It’s anti-comedy at its finest, a rip-roaring takedown of the profound spiritual emptiness at the core of arena headliners like Carlos Mencia or Dane Cook. There was talk at the time of Funny People’s release of a proper full-length spin-off for Raaaaaaaandy, and while nothing seems to have come of it, this bite-sized nugget gives a glimpse of the awesomeness that might have been. Motherfuckers need to know, but five years later, it seems they still not ready.