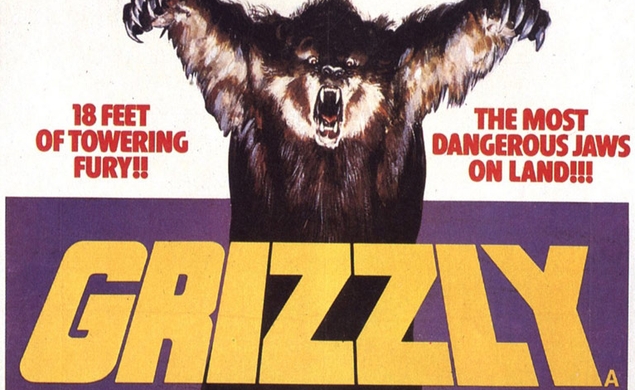 Last month, Kino Lorber announced the latest in its recent series of mergers, partnerships, and acquisitions (which collectively has made the company one of the more eclectic and reliably interesting independent companies releasing DVDs and Blu-rays today). Kino Lorber’s new partnership is with Scorpion Releasing, another independent home-video company, which for the past several years has seemingly acquired every 1970s/1980s pay-cable, UHF, and VHS favorite that Shout! Factory and Anchor Bay hasn’t. Kino Lorber will be distributing Scorpion titles for at least the next two years, starting this week with two DVDs: the 1981 swashbuckling adventure Green Ice and the 1976 environmental disaster picture Grizzly.

Grizzly is the bigger name of the two. A blatant Jaws ripoff, Grizzly stars chiseled, gravel-voiced character actor Christopher George as a ranger who argues with his supervisor that they should close a national park after several people are found dead, mauled by a 2,000-pound grizzly bear. The Kino/Scorpion disc adds the “Jaws With Claws” featurette, and a Q&A from a recent screening at the New Beverly in Los Angeles. But the main attraction is the movie itself: an entertainingly cheesy man-against-nature picture with beautiful scenery, a laughably familiar plot, wooden performances, and fun bear effects. One typical Grizzly scene has a female ranger stripping down to her underwear to frolic under a waterfall, and enjoying a few seconds of fun before a giant paw pops in from the side of the frame and ruins everything. Repeat that scene with campers, hikers, hunters—and throw in a shrill Robert O. Ragland score and a few gallumphing shots from the bear’s point of view—and that’s Grizzly. It’s a hundred times more glorious than any Sharknado.

It’s tempting to say that Green Ice owes its existence to Raiders Of The Lost Ark as much as Grizzly owes its to Jaws, but the two movies actually came out around the same time in 1981, and Green Ice doesn’t have the same throwback feel as the wave of pulp-inspired post-Raiders action pictures. Ryan O’Neal stars as a cash-strapped engineer who meets a bewitching young woman (Anne Archer) while vacationing in Mexico, and soon is involved in an elaborate scheme to foil a ruthless emerald smuggler (Omar Sharif). The movie includes jungle shootouts, hot-air balloons, capers in impregnable strongholds… the works. It’s pleasantly breezy but largely undistinguished, outside of Rolling Stones bassist Bill Wyman’s lush, synthesizer-accented score (which is available as an isolated audio track on the Kino/Scorpion DVD). Green Ice is exactly the kind of movie that played on TV repeatedly in the 1980s: good enough to watch through to the end, but not crazy enough to inspire a cult following. (It’s no Grizzly, in other words.)