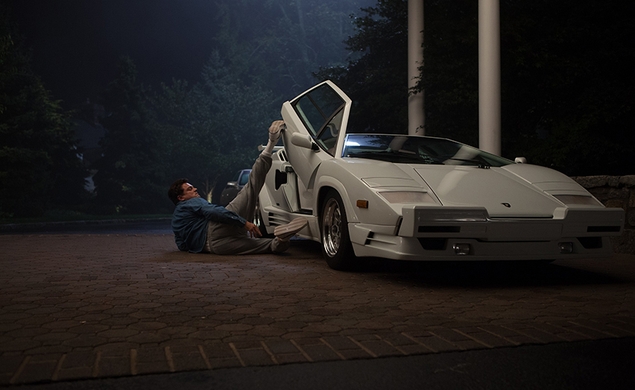 Martin Scorsese has had recurring collaborations with certain actors (such as Robert De Niro, Leonardo DiCaprio, Harvey Keitel, and Joe Pesci), and crew members (such as cinematographer Michael Ballhaus, and writers Paul Schrader and Mardik Martin), but no collaborator is as closely identified with Scorsese as editor Thelma Schoonmaker, who’s been working with him since they met at NYU in the early 1960s. With The Wolf Of Wall Street coming out on DVD and Blu-ray tomorrow, Schoonmaker spoke briefly with The Dissolve about her long working relationship with Scorsese, and how getting together with him in an editing room every few years is like having a long lunch with an old friend.

The Dissolve: The Wolf Of Wall Street has been described by some as a comedy. Did you think of it that way, and if you did, did you approach it differently?

Thelma Schoonmaker: Comedy cutting is a real skill. I learned a lot when we were doing The King Of Comedy, from the timing instructions that Jerry Lewis was giving to other actors. The slight beat, maybe two or three seconds, before you answer a question, or the beat you put in the middle of a line, is all where comedy lies. Some of the greatest comedians, like Gracie Allen, who I adored, have the greatest senses of timing. You have to learn how to make comedy work.

This was a little different. I don’t think of the film as a comedy, actually. We were put in that category when nominations started and then it sort of has become accepted. For me, it was just a regular movie. However, the humor and the improvisations were so rich and so wonderful that it was a joy to cut, really. You do have to think differently when you’re doing comedy then when you’re doing drama. You have to be very aware, like I said, of how long to wait before the next line. It’s something that takes some learning to know how to do.

The Dissolve: Or even scenes with no lines, like that scene in The Wolf Of Wall Street where Leonardo DiCaprio is crawling to his car and the camera just holds on him for a long time.

Schoonmaker: That’s right, and you know, I as an editor was concerned when I saw the dailies of that, because I said to Marty, “Did you even do any coverage of him?” And he said, “Oh no no no. The humor is in the body language, in the wide shot. That’s my favorite shot in the movie, and I do not intend to shoot any coverage on it. It will hold, and it will work.” And I was worried about it, frankly, but boy, the first time we screened it, people were roaring, all the way through, and he was absolutely right. It is the body language. Even the funny thing where he can’t open the door except with his foot, and when he does open the door with his foot it pulls his whole body up and he has to extricate himself. [Laughs.] And then one of my favorite moments is when he’s actually pulled himself in the car and he’s on the phone with his wife, and the way his feet are moving, that’s all you can see. It’s so funny, because he’s so hysterical about what she’s telling him. You know, “Get him off the phone!” She can’t understand what he’s saying, and it’s all in his feet.

Body language is something that Marty is an expert about. It’s almost 50% of acting, as far as he’s concerned. Even when he’s in a meeting with people, you can tell he’s reading exactly what’s happening with somebody’s hands or how they’re moving in their chair and what that’s indicating about what they think of what he’s saying. [Laughs.] It’s quite an amazing skill he has for that.

The Dissolve: With a movie as massive as The Wolf Of Wall Street, were you cutting while the film was still in production?

Schoonmaker: Oh yes, I always cut the film first, and then Marty comes in and we cut together for the rest of the post-production process. It’s a wonderful period. He’s a great editor. He taught me everything I know. I knew nothing about editing when I met him. But he was born an editor. He was also born a director, I think. I don’t know what the heck was going on. [Laughs.] He has this profound sense of the importance of editing. I don’t think any director can become a great director without having a deep sense of editing. He thinks like an editor when he’s conceiving of a film, when he’s co-writing it, and when he’s shooting it. And that’s 50% of my job, y’know? He gives me footage that works. I don’t think a lot of directors these days have that sense or knowledge of the importance of editing.

The Dissolve: Is the opposite true as well, that editors have to think like directors? The list of established editors who became directors isn’t incredibly long. Hal Ashby, Robert Wise….

Schoonmaker: David Lean. In England, there were quite a few. Something about the studio system there was different. But you’re right, it doesn’t often happen. Because you can’t just be an editor to be a good director, but you have to have that as one of your talents. You also have to be a great designer of camera-movement, and when to use the camera, and how.

One of the things I always point out to students when I talk to them is that in the famous “What’s so funny about me?” sequence in GoodFellas, when Joe Pesci is talking to Ray Liotta in the nightclub, Scorsese did not shoot any close-ups. He wanted to show how the men around the two of them were gradually getting the idea that something terrible was about to happen. They were all laughing at first, and then suddenly, it got deadly serious, and it was possible that someone was going to pull a gun and shoot somebody. He deliberately did not shoot close-ups there so that we wouldn’t be tempted to use them. See that’s knowing how to use your technique properly, as a director. You have to know a lot when you’re a director: acting, editing, camera-work, costume-design. Very very important, all of it.

The Dissolve: Do you think that editors themselves have an individual style?

Schoonmaker: Yes, some. Dede Allen brought into filmmaking a very strong style. I do think it depends on the director you’re working with and the footage you have. An editor can not make a bad film good. You can only go so far. [Laughs.] But yes, I do think there are strong editing styles, depending on what they’ve got. Y’know, Dede worked with some very good directors, so she was given good footage, and made the most of it. Bonnie And Clyde, for example.

The Dissolve: You’ve worked almost exclusively with Martin Scorsese, and that’s not all that uncommon, where editors stick with a single director for a long time. Why do you think that is?

Schoonmaker: It’s about a sense of trust. From the very first moment I worked with Marty, I think he realized I was someone who would do what was right for his films, and major egos would not be a problem. Egos are a challenge in all other parts of filmmaking. [Laughs.] He gradually over the years began to appreciate that and rely on that much more, and as I became more experienced, he was able to rely on my judgment much more. We share many of the same feelings, for example a passion for the films of my late husband [Michael Powell]. When we work together, it’s just the most amazing time. We talk about everything in the editing room, in addition to the editing we’re doing. It’s a very rich collaboration. Wonderful. I’m a very lucky person.