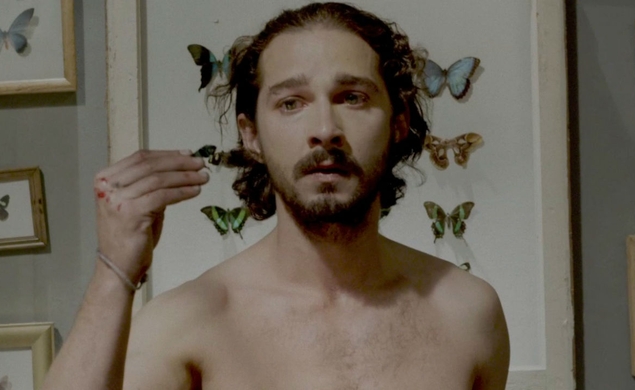 As the guy who starred in three middling-to-unbearably-awful Transformers movies, as the guy who played “Mutt Williams” in the last middling-to-unbearably-awful Indiana Jones movie, and as the guy who starred in the not-middling-just-unbearably-awful Wall Street: Money Never Sleeps, Shia LaBeouf understands how it feels to be a target for film critics. LaBeouf’s done some good work onscreen, but he’s also been in his share of bad movies, and when they—and the accompanying bad reviews—start to pile up, I’m sure it can start to feel like you’re being picked on unfairly. It could even inspire someone to channel that frustration and anger in productive ways.

One such way might be to create something personal to express those emotions, and to take a good hard look at your accusers. That’s what LaBeouf did with “HowardCantour.com,” a 12-minute short that critiques online critics, like the one played in the film by Jim Gaffigan, and their strange world of press screenings and junkets. LaBeouf directed and (apparently) wrote the project, which was accepted into the Cannes Film Festival.

But if you’re trying to show how terrible online critics are at their job, maybe it’s a good idea not to plagiarize the whole thing, which, as it turns out, is what LaBeouf did. Yesterday, “HowardCantour.com” went up at ShortOfTheWeek.com, and quickly began to spread around the Internet. As the film got picked up many of the very sites LaBeouf was attacking, a few eagle-eyed readers (yeah, I went there) noticed an extreme similarity between LaBeouf’s work and a short comic by Ghost World and Art School Confidential author Daniel Clowes. “HowardCantour.com” made no mention of Clowes or his comic; the accompanying essay at ShortOfTheWeek.com simply claimed it was “created by actor-turned-director Shia LaBeouf.” The Vimeo embed of the film was made private, but you can still find a version at BuzzFeed, and compare it side-by-side with a page of Clowes’ “Justin M. Damiano.”

Clowes told BuzzFeed he’d “never spoken to or met” LaBeouf, and that he was “shocked” when he saw the short. Several hours later, LaBeouf addressed his actions in a series of tweets:

Copying isn't particularly creative work. Being inspired by someone else's idea to produce something new and different IS creative work.

In my excitement and naiveté as an amateur filmmaker, I got lost in the creative process and neglected to follow proper accreditation

Im embarrassed that I failed to credit @danielclowes for his original graphic novella Justin M. Damiano, which served as my inspiration

I was truly moved by his piece of work & I knew that it would make a poignant & relevant short. I apologize to all who assumed I wrote it.

Ah, yes. The old “I’m sorry you feel that way” apology. He wasn’t sorry he took Clowes’ work, he was sorry we all assumed he wrote it (dumb online film critics, making bad assumptions!). Even worse, as Buzzfeed observed, at least part of his apology appears to be cribbed from a post on Yahoo! Answers.

It’s also pretty bizarre to see a man who has made millions of dollars in Hollywood and directed several other shorts refer to himself as an “amateur filmmaker.” The kid who videotapes himself in the mirror dancing to Beyonce’s “Crazy In Love” is an amateur. Shia LaBeouf is a professional, which is a particularly problematic fact in this case because “HowardCantour.com” is ostensibly designed to call out online critics for their lack of professionalism. That reality might finally be sinking in for LaBeouf, who posted the following tweet a few hours after the rest of his apology: