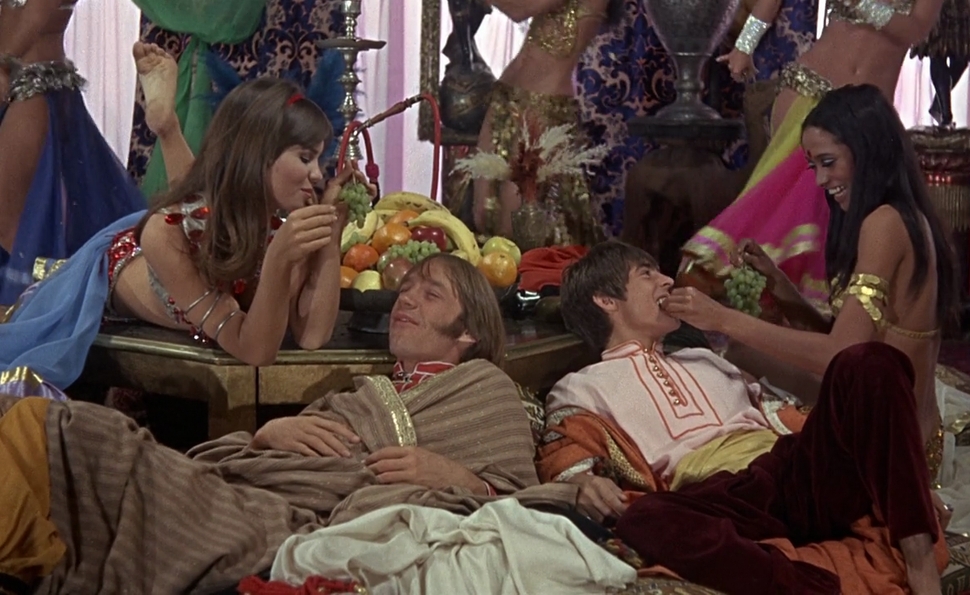 The Monkees’ only feature film was successful, surreal professional suicide

ONE AND DONE EXPLORES THE FILMS OF WRITERS, DIRECTORS, AND ACTORS WHO ONLY MADE A SIGNIFICANT CONTRIBUTION TO A SINGLE FILM.

When  I was about 10 years old in the mid-1980s, I fell for The Monkees with a passion bordering on the pathological. I didn’t just compulsively re-watch reruns of their television show and listen to their songs: I was obsessed. I wanted to be them. At the risk of exposing the full extent of my dorkiness, my sixth-grade friend Yotam Haber, who shared my obsessions with The Monkees, drew up a map for a land called Monkazu, where all the citizens would live by the values established by The Monkees, whatever those might have been.

When it came time for my first concert, there was no decision to be made: The Monkees and “Weird Al” Yankovic were touring together. What pop-music-crazed 10-year-old could turn down a bill like that? For the prepubescent set, it was like a Rolling Stones/Beatles co-headlining tour, only cooler, because “Weird Al” was involved.

It makes sense that I would fall hopelessly for The Monkees in ways I now find mildly embarrassing, because in a sense, they were made for me. They were designed as a television version of A Hard Day’s Night-era Beatles for American kids, teenyboppers, heads and squares who missed the winking double entendres and enjoyed the catchy songs, bright colors, and madcap comedy. But to the tiresome gatekeepers of culture, The Monkees’ crimes against authenticity were legion. For starters, they weren’t born of sweat, muscle, and ambition in a garage somewhere, as rock legend demands. The band wasn’t born at all; it was created. To make matters worse, it was created by television people, those vile bogeymen of the counterculture.

According to this line of thinking, The Monkees were a hopelessly bogus attempt to re-create the authentic, organic magic of The Beatles using actors, session musicians, and Brill Building songwriters. To the people who sneered at The Monkees, they weren’t even musicians. They didn’t write their own songs or play their own instruments. They were just actors called upon to play the role on television.

But while the Monkees were unmistakably a creation, they were a brilliant one, forged from the finest possible ingredients. They were made for a specific cultural moment when the public wanted more of The Beatles than The Beatles could possibly provide. But The Monkees have lasted in a way more organic groups haven’t. The band members didn’t write their earliest hits, but brilliant pop craftsmen like the boyish songwriting team of Tommy Boyce & Bobby Hart did. (They also originally auditioned to be in the band.) Where The Monkees’ music has endured, that’s largely because songwriters like Neil Diamond (who wrote “I’m A Believer”) and Carole King & Gerry Goffin wrote catchy ditties that perfectly suited individual episodes, yet were artful enough for posterity.

The Monkees were a Frankenstein’s-monster attempt to create an American Beatles for teenyboppers, but they rebelled against their corporate masters almost as soon as they’d been formed. The group members had a powerful instinct for commercial self-destruction that found its purest form in their one and only cinematic vehicle, 1968’s Head, which died a painful death in theaters just after their television show was cancelled. 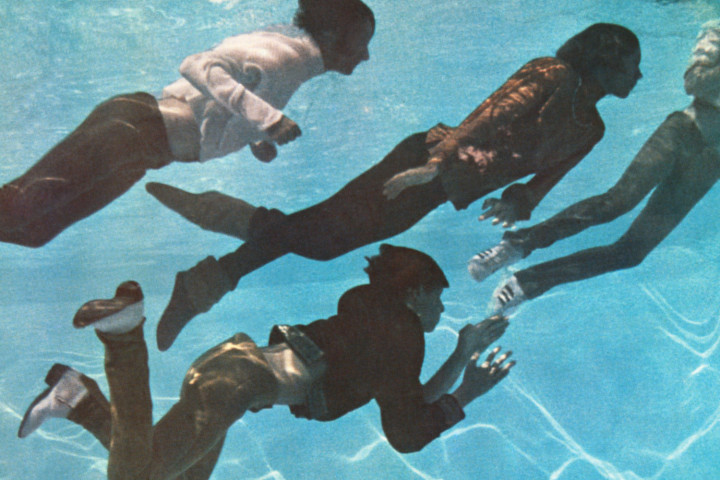 The film throws down the gauntlet with an extended sequence of a dreary functionary, flanked on all sides by establishment figures like cops and National Guardsmen, trying to cut a red ribbon to commemorate the opening of a new bridge. The microphone refuses to work, however, and audiences who just slipped in could be forgiven for assuming they’d wandered into the wrong movie. For the first few minutes of the film, The Monkees are absent. Then they suddenly burst forward in a mad rush, running with wild abandon. Micky Dolenz hurls himself off the bridge in dreamy, trippy slow-motion, to his seemingly imminent doom. Yet when he reaches water, the majestic “Porpoise Song” blasts as Dolenz floats ethereally. In a dream state, he sinks to the bottom of the ocean and frolics with mermaids.

The colors are overexposed and trippy, due to an expensive, time-intensive process called “solarization.” The vibe is powerfully psychedelic; it’s hard to miss the symbolism of a movie about a band sick of the insane commercial demands of being pop stars, opening with arguably its most charismatic member hurling himself off a bridge. This is a head film all right, in the slang sense where “head” is a euphemism for someone who enjoys the deplorable practice of taking LSD.

A beautiful woman then passionately, sensually kisses all the members of The Monkees in order. At this point, any children remaining in the audience are wondering what in the fuck is happening, and what their dependably daffy minstrels are doing in such an artsy, stream-of-consciousness mind-fuck. But then things get really weird. The screen splits apart, and with the demented glee of a Tin Pan Alley songbird going off the deep end, The Monkees pre-empt criticism with a maddening, sarcastic ditty which writes them off as “a manufactured image with no philosophy.”

“They say we’re manufactured, to that we all agree / So make your choice and we’ll rejoice in never being free!” Davy Jones sings, with defiant self-destruction. He’s a pop-culture gorilla rattling his cage, knowing he will never escape. “The money’s in, we’re made of tin, we’re here to give you more,” Dolenz continues. This ditty crosses the line separating mild self-deprecation from self-negation, even suicidal ideation. Head can be understood more as an act of professional suicide than an attempt to extend The Monkees’ brand to film. 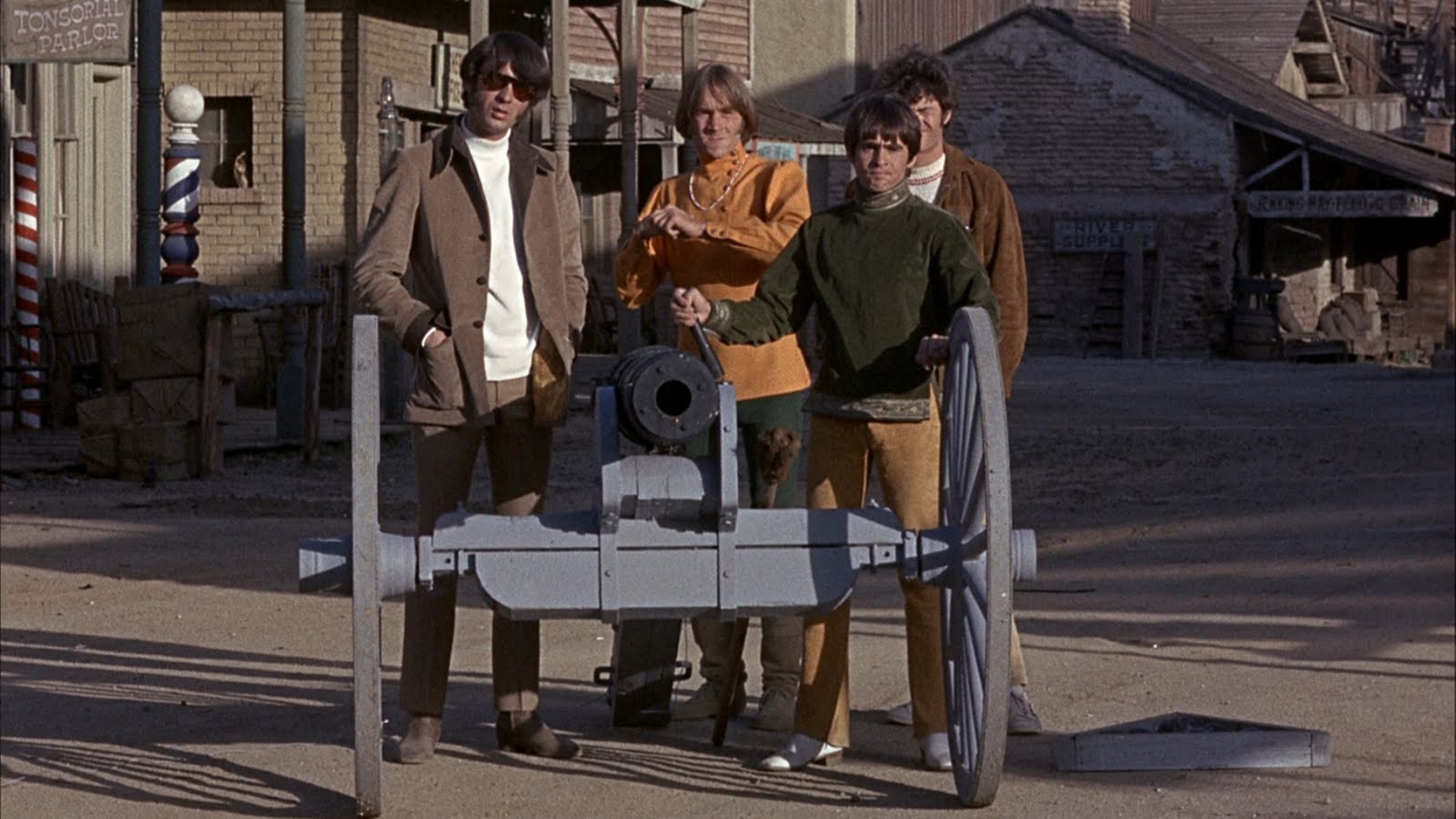 The screen splits into 20 screens, each simultaneously begging for and actively dissuading attention. The effect is overwhelming; it’s a giddy rush of sound, image, and attitude so lightning-fast, it’s difficult to process all at once. Then we’re off to some unnamed war where, amid explosions and gunfire, a photographer for Life pops up out of nowhere, and football player Ray Nitschke tackles Peter Tork. Head equates the socially condoned violence and conditioning of football with the socially condoned violence and conditioning necessary to send boys to war years before Hearts & Minds—like Head and the Monkees show, also a product of Bob Rafelson, Bert Schneider, and Stephen Blauner, later incorporated as BBS Productions—made the same association in a less irreverent way.

Actually, hints of BBS iconography to come is littered throughout Head, like how Micky Dolenz uses a football helmet in lieu of a more conventional soldier’s helmet, just like Jack Nicholson wore a football helmet instead of a motorcycle helmet in Easy Rider, released just a year after Head. Oh, and the co-screenwriter of Head? Jack Nicholson, who had a lot of experience with the Roger Corman brigade.

Nicholson and the Monkees were given free rein to be as spacy and provocative as possible. They apparently couldn’t give audiences what they want without reminding them of all the awfulness pop music is supposed to help them escape. So an ostensibly crowd-pleasing sequence of The Monkees in white suits, performing for an overflowing audience of screaming girls, is intercut with images of the suffering people of Vietnam. It’s like an Elvis movie with randomly inserted images of corpses being piled into a mass grave in a concentration camp.

There are blackout gags that wouldn’t be out of place in the Monkees TV show, like Micky wandering shirtless through an endless desert until he finds a Coca-Cola machine. He’s distraught to discover it’s empty; meanwhile, a Coke jingle plays, mocking both his pain and the concept of advertising itself. But within this context, they’re decontextualized and surreal. 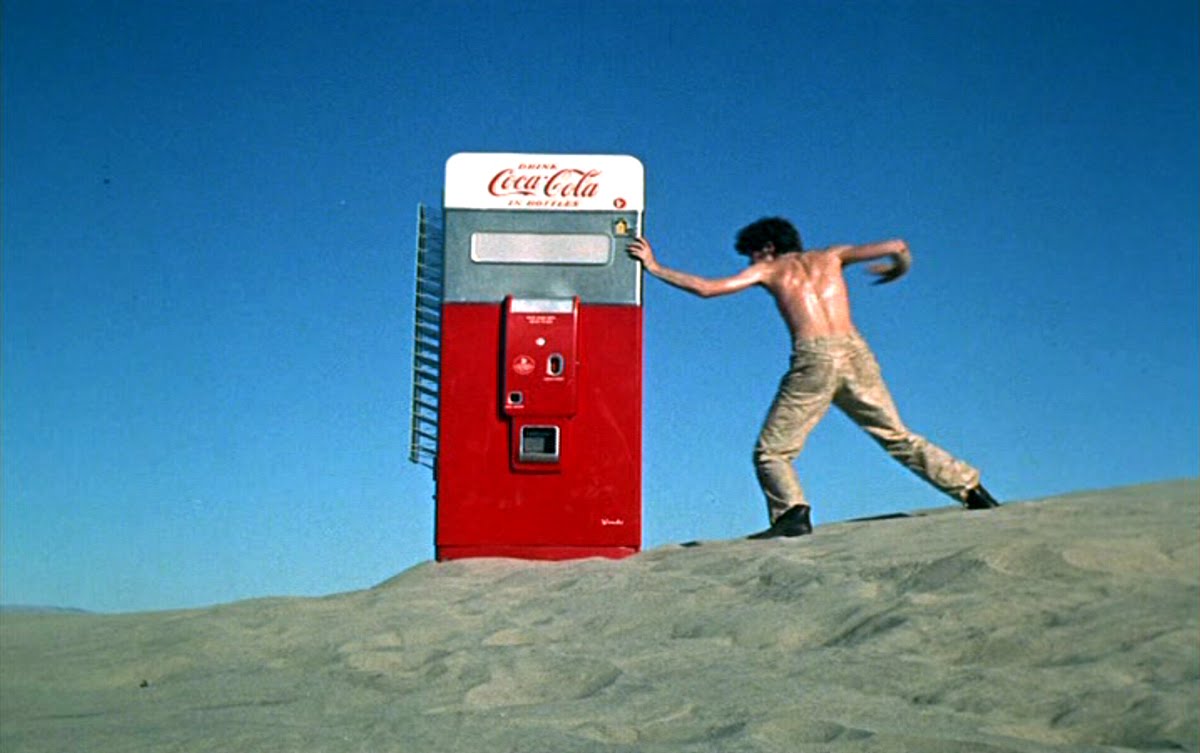 Unlike A Hard Day’s Night, Head has no plot to speak of. The film’s deliberate shapelessness makes The Beatles’ Magical Mystery Tour resemble a Chinatown-like exemplar of expert craftsmanship by comparison. In lieu of a strong central narrative, Head offers one damned thing after another, a potpourri of free-associative randomness riffing heavily on commercials, warfare, sex, and the group’s own mythology. According to pop-culture legend, Nicholson and the Monkees wrote the script in a weekend while high, and the film certainly feels like it was made for, by, and about stoners. There’s even an extended sequence where The Monkees, in a Middle Eastern tableau the film is in no hurry to explain, suck down smoke from a hookah while scantily clad dancers perform for them.

In a fit of disgust during a cowboy scene, Dolenz breaks through the fourth wall, pulling fake arrows out of his body, tearing through the scenery, wandering off set, and telling director Bob Rafelson that he doesn’t want to engage in this charade anymore. The sequence is all the more provocative considering how little regard the film has for reality in the first place. The Monkees were maligned as instant sellouts, but here, Dolenz doesn’t just rebel: He rebels against his own rebellion, turning his back on a movie that’s already ostensibly a giant “Fuck you!” to the group’s teenybopper fan-base.

A recurring motif in the film finds The Monkees inside a giant black box whose proportions are impossible to discern. Once again, the symbolism is heavy; they’re stuck inside a box of public perception, and there’s no way to escape it without transcending the boundaries of reality. Near the end, The Monkees are walking out of a soundstage, and Frank Zappa, pulling a cow along by a string, tells Davy Jones he should work on his music, because the youth of America are depending upon them to lead the way. 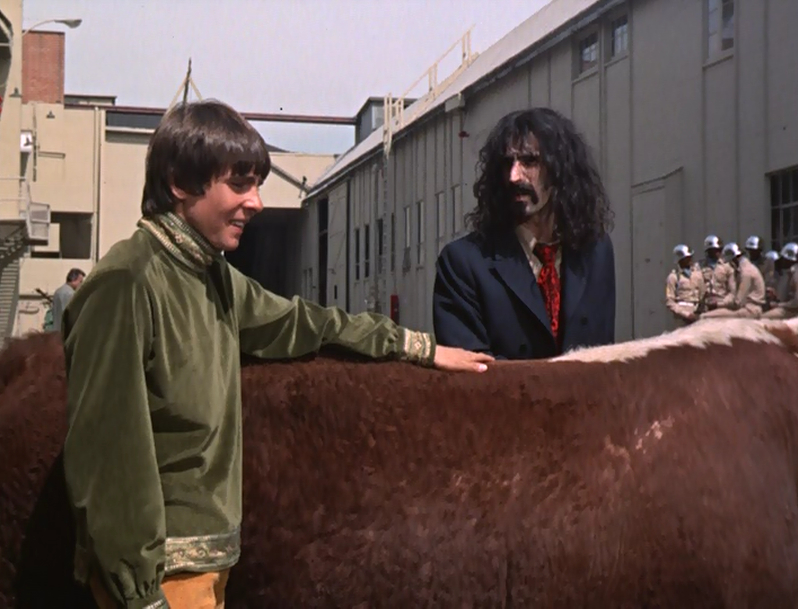 One sequence bleeds into another with dream logic, the only logic the film respects. The Monkees are in a diner in one moment; then, in a single cut, Davy Jones is being pummeled in a boxing ring by Sonny Liston, and his bandmates have the pin-striped suits of 1940s gangsters. In one of the few recognizable bits of parody, there’s an extended spoof of Clifford Odets’ play Golden Boy, a reference destined to fly way over the heads of 99 percent of the film’s audience.

It seems strange to write about Head breaking a fourth wall it barely acknowledges in the first place, but there are scenes throughout where Peter Tork—playing, it should be noted, Peter Tork—shatters the illusion that Head is anything but a put-on by talking directly to Rafelson (who used his Monkees money to make movies like Five Easy Pieces) and Nicholson. Hell, Dennis Hopper even wanders into the frame in another eerie portent of the iconic movies BBS would soon be making.

Head reminds me of Julien Temple’s Malcolm McLaren-engineered Sex Pistols deconstruction The Great Rock ’N’ Roll Swindle. It’s another attempt by cynical creators to depict their handiwork as little more than a prefab con game, meant to eke allowance dollars out of teenagers. And it accidentally establishes its subjects as men of integrity and importance, men who matter. The harder these films try to depict their subjects as fakes and frauds, the more their genuine artistry oozes out. It does not seem coincidental that the soundtrack to Rock ’N’ Roll Swindle even contains a cover of “(I’m Not Your) Steppin’ Stone.”

Head succeeded in killing The Monkees as a commercial enterprise. The film was a flop at the box office, and the group nose-dived in popularity. But in committing professional suicide with this trippy, surreal, unique film, they established themselves as artists who were cast to sell laundry detergent, instant coffee, and commercial time, but evolved to have a ferocious, very strange will of their own.