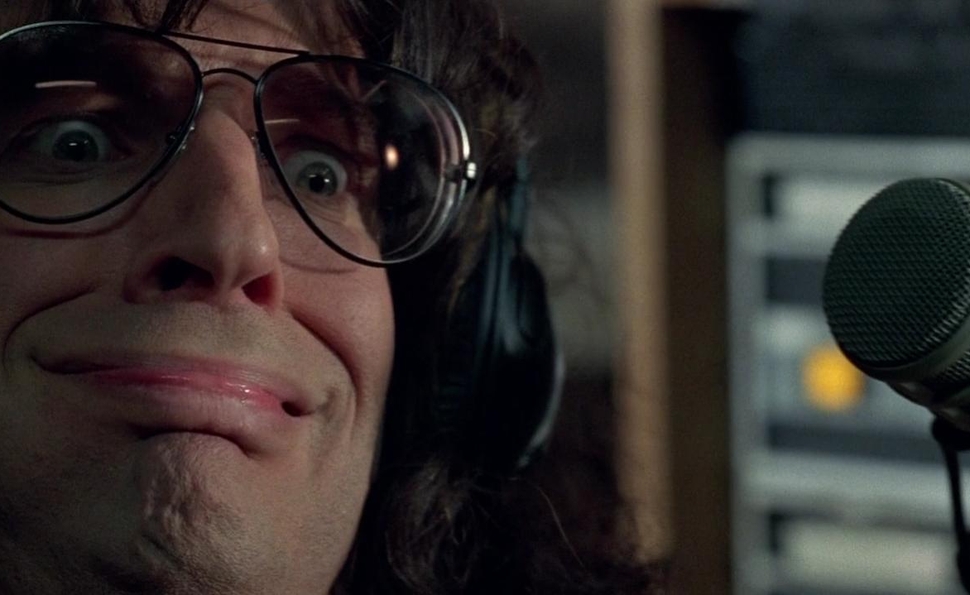 ONE AND DONE EXPLORES THE FILMS OF WRITERS, DIRECTORS, AND ACTORS WHO ONLY MADE A SIGNIFICANT CONTRIBUTION TO A SINGLE FILM.

It’s hard to overstate what a central role Howard Stern’s marriage played in making his shtick palatable to a national audience in the early days of his career. Remove Stern’s oft-discussed association with a smart, serious social worker who deserves sainthood for her ability to put up with her husband’s ribald antics, and the early incarnation of his show becomes a deeply creepy affair about a towering pervert attempting to have sex with the sexy, nubile, scantily clad women he lures into his studio. That show sounds too off-putting ever to take off the way The Howard Stern Show did, but make the show about a faithful, happily married man attempting to either resist the advances of the sexy, nubile, scantily women he lures into his studio, or to be as sexual as possible with them without crossing the boundaries of monogamy, and Stern’s narrative suddenly becomes one of heroic self-denial and noble forbearance.

The success and durability of Stern’s professional pairing with sidekick Robin Quivers was equally important in making his shtick palatable. Remove her, and Stern’s show is a bunch of heterosexual creeps engaging in an offensive cavalcade of racist, sexist, homophobic, and ableist comedy bits. But pair Stern with a strong black woman, and suddenly it’s something else entirely: a much more socially acceptable cavalcade of ambiguously racist, sexist, homophobic, and ableist comedy bits laughed at, and by extension, presumably acceptable to, a strong black woman. 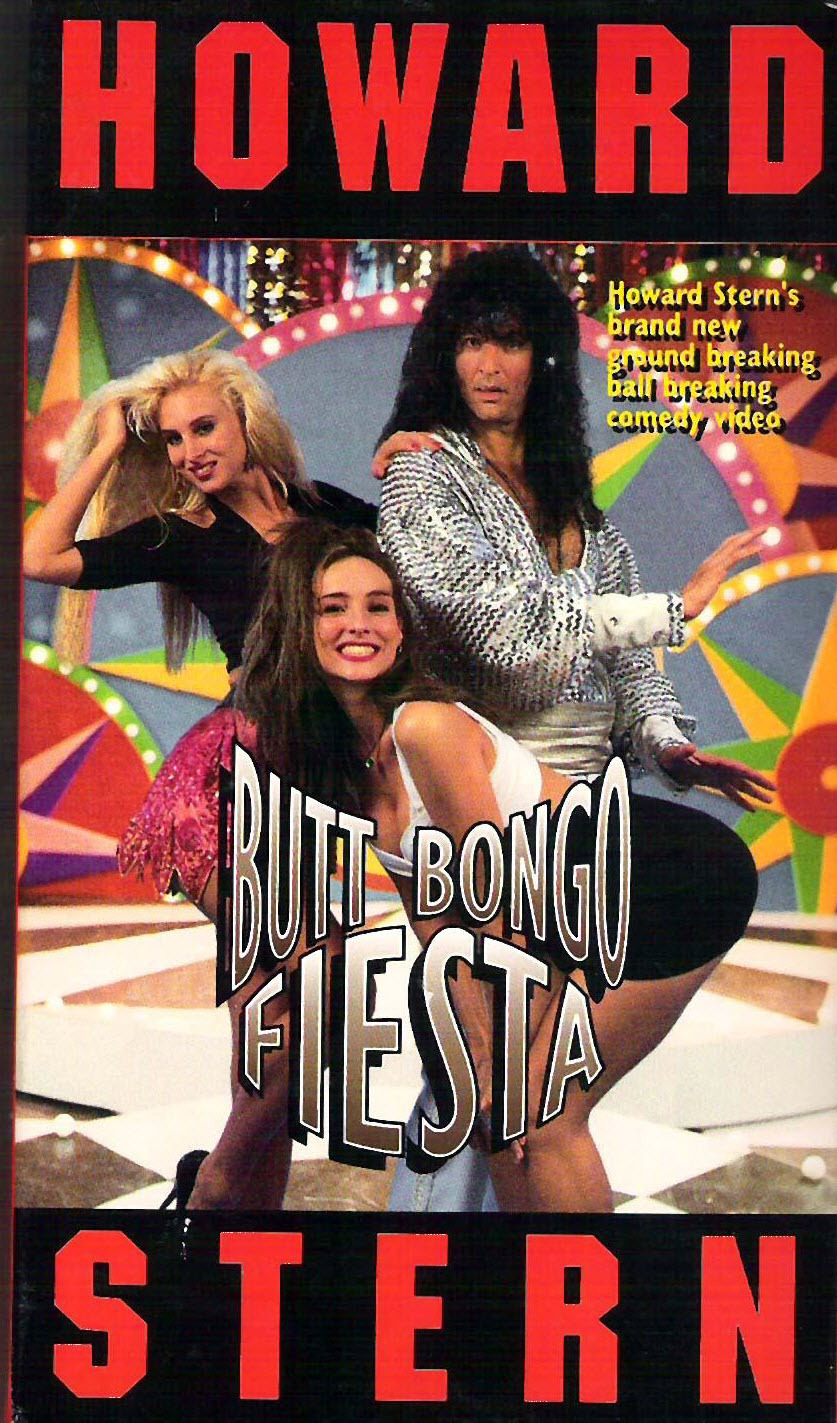 So when it came time to adapt Stern’s bestselling 1993 memoir Private Parts for the big screen, the filmmakers foregrounded his courtship and marriage at least partially as a way of making Stern acceptable to people who know of him primarily through trademark bits like the Butt Bongo Fiesta, and might be inclined to find him a little distasteful.

Private Parts has an unmistakable agenda. It sets out to prove to Stern diehards that their pathological devotion to this ridiculous man and his lurid obsessions are wholly justified. It’s equally obsessed with convincing detractors that they have grossly misjudged the man, and allowed silly sideshows to mask his good heart, sharp mind, and fundamental decency.

Stern’s memoir was re-conceived as a slob vs. slobs comedy by a producer who nearly has a monopoly on them: Ivan Reitman, who earlier produced or directed Animal House, Meatballs, Stripes, Ghostbusters, and Twins. To write the screenplay, Reitman hired Meatballs and Stripes co-writer Len Blum. To direct, Reitman got a third strong woman, actor-turned-director Betty Thomas, to further undercut the frat-boy hijinks at the film’s core.

The result is a biopic of Howard Stern that’s far more sensitive than anyone had a right to expect. Thomas and her screenwriters shaped the film as an unlikely love story as much as a comedy. So while it’s proudly, boorishly irreverent, it takes Stern’s marriage seriously. This extends to casting drama actor Mary McCormack to play Stern’s wife Alison, then keeping in material involving Alison’s miscarriage, which Stern joked about on the air.

It takes a lot of chutzpah to include a miscarriage in a lowbrow comedy this wacky, but the sequence serves several crucial functions. For starters, it establishes that, for Stern, everything really is fodder for the airwaves. While that involves a lot of bits of questionable taste involving gay people, sleazy women, and the mentally ill, it also includes the most painful traumas he’s ever experienced. The double-entendre title promises to reveal Stern’s private parts, and nothing is more private, or more serious, than the way Stern dealt with his wife’s miscarriage. The sequence also establishes Stern’s bona fides as an actor. The melancholy look on his face even as he performs a bit involving God taunting him about the miscarriage conveys the combination of catharsis and brutal honesty that characterizes Stern at his best.

Stylistically, at least, the film Private Parts recalls most directly is Annie Hall. (Stern’s unmistakably Jewish nasal whine even recalls Allen’s voice at times.) Throughout the film, the filmmakers break the fourth wall so characters, some central, some passing, can give their accounts of what we’re watching. Like Annie Hall, Private Parts traces its protagonist’s neuroses to a bullied childhood where nothing he ever did was good enough for his angry, depressed father. So Stern grows up an insecure nerd, too tall, too skinny, and cursed with both an unruly mop of black hair and a mustache that makes him look like a walking sight gag.

Private Parts offers a creation story for its protagonist. After an Annie Hall-like opening confessional on Stern’s awfulness from an executive played by Allison Janney, the camera adopts a tight close-up on Stern’s eye as he prepares to descend from the rafters in character as “Fartman” at the MTV Music Awards. In voiceover, Stern speaks of wanting to create the greatest moment in entertainment, and his realization, just before he descends to the stage, that he was making a terrible mistake, and it was too late to stop.

Stern is then forced to do a professional walk of shame before his peers, as Flavor Flav, Blues Traveler, and the rest of the assembled musical royalty gaze at him with looks combining pity and revulsion. This, on some level, is who Howard Stern is: the nerd among the beautiful people, the goofy everyday guy who managed to reach undreamed-of heights of popularity by saying all the leering, sexist, objectifying things his listeners might have thought, but had had the good sense not to say publicly. 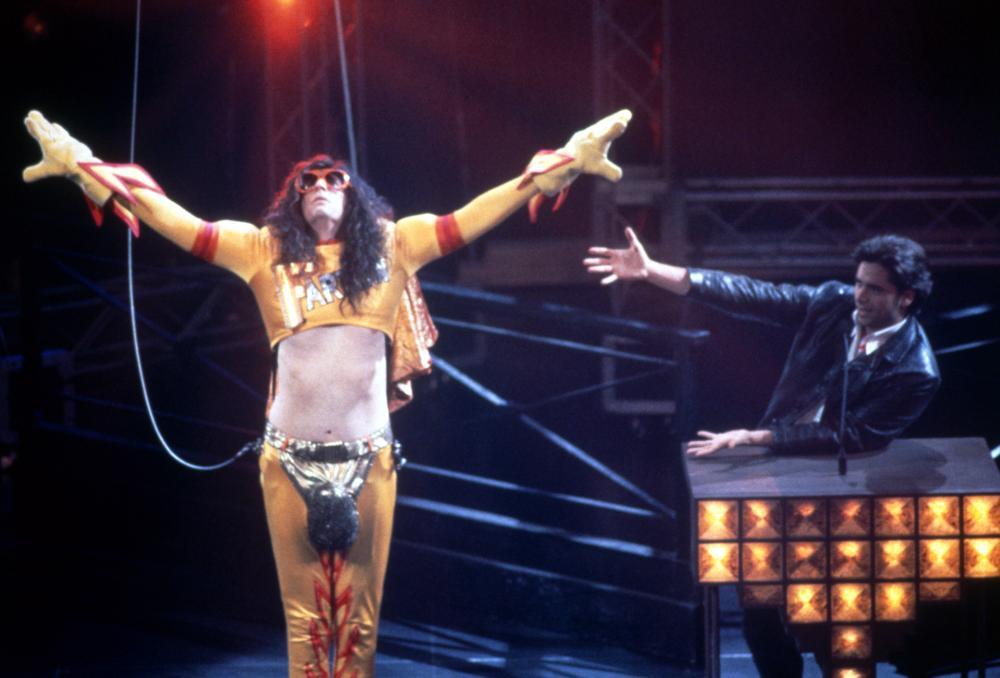 But it takes Stern a long time to get to that place of simultaneous self-acceptance and self-loathing. (The two go hand in hand an awful lot where celebrities are concerned.) He starts off as a nerd who aspires only to be on the radio. He doesn’t know who he is as a person or a performer, so the voice he affects during his first few gigs is weak, affected, and unsure. It’s the timid squawk of someone who doesn’t know what he wants to say, only that he wants a big public forum to say it.

Fresh off directing The Brady Bunch Movie (with Doctor Dolittle and Alvin And The Chipmunks: The Squeakquel still on the horizon), Thomas delights in the bad taste and deplorable fashions of the 1970s. Only Alison Stern believes in her young, mustachioed husband, but as he moves from city to city and station to station, he begins to develop faith in himself and his voice as a radio entertainer.

Part of the absurdity of granting the biopic treatment to the man behind Butt Bongo Fiesta is the way it treats his discovery that his listeners are as turned on by lurid discussions of lipstick lesbianism as he is. Private Parts makes that revelation as monumental as John Lennon and Paul McCartney’s initial meeting would be to a Beatles biopic. Stern has a number of “eureka” experiences though out the film, none of which would qualify as moments of profound significance in any other biopic. For example, he discovers that listeners love ambiguously homophobic and sexist humor, and get their rocks off imagining the perverted things he’s doing, or thinking about doing, to the parade of willing young women who parade through his studio. From a commercial standpoint, Private Parts made it so Stern super-fans weren’t merely fantasizing about all Stern’s naked, sexy studio lesbians: They could see them, and their abundant nudity, plainly. Even as the film attempts to make Stern as warm and cuddly as possible, it takes full advantage of its R rating with the gratuitousness Stern fans have come to demand from their hero.

As the film approaches its third act, and Stern’s shtick really begins to take off on a national level, Private Parts threatens to become a never-ending stream of Stern being a bad boy with an impish grin on his face, juxtaposed with shots of men and women in suits looking as if their souls die a little more with every obscene, button-pushing word he utters. What the film desperately needs is escalation. It receives this in two forms. First, there’s the escalation of Stern’s popularity, visibility, and career as he moves up from one market to another until he hits the epicenter of the media universe with a radio gig in New York.

The other manner in which Private Parts benefits from escalation is in the late-period appearance of Kenny “Pig Vomit” Rushton (Paul Giamatti). Rushton volunteers to ride herd on The Howard Stern Show with the intention of either taming Stern into a state of brainwashed docility, or driving him crazy with impossible demands. To put things in videogames terms, Pig Vomit is the Boss, the main villain the hero must conclusively defeat in order to win the game. The presence of the Boss makes all the other suit-clad executives mortified by Stern’s shenanigans seem less significant, if not downright meaningless.

Private Parts does not require an actor of Giamatti’s stature to portray the role of Pig Vomit (though Giamatti was not yet the beloved national treasure he is today), but boy, does it help. From their first scene together, where Rushton condescendingly attempts to tell the radio superstar how to correctly pronounce the station’s call letters, Stern and Giamatti have terrific, explosive chemistry. Where Stern’s performance starts out meek, then grows in confidence as Stern comes to embrace his destiny as the filthiest man on the radio dial, Giamatti begins with clammy, smug control, then escalates in aggravation and irritation until he’s a spitting, yelling trainwreck of a man. Private Parts might not deserve a straight man like Giamatti, but it’s blessed with one anyway.

Private Parts explicitly states its agenda of making Stern acceptable to the sizable Stern-phobic portion of the population (many of them women) by framing the entire narrative as a story Stern tells a woman named Gloria (Carol Alt) on a plane as a way of explaining why, the public record be damned, he’s actually a sweetheart. By the end, Gloria agrees that Stern’s towering frame houses an equally enormous heart. Then Stern turns to the camera and says he could totally have sex with Gloria if he wanted to, but he will refrain out of his love and faithfulness to his wife. Then, just to have it both ways (no pun intended), Stern says that if he really exerts himself, he might be able to swing things his way and finally talk Alison into some “hot lesbo action,” presumably with Gloria. That’s the Stern mystique at the time of Private Parts’ release, in a nutshell: The importance of family and faithfulness is re-affirmed by a man synonymous with ogling naked lesbians in a non-visual medium, but he holds out the potential, however slim, that faithfulness might be rewarded with a hot threesome.

Private Parts was a big mainstream critical and commercial hit. There have been scattered hints that Stern might return to film. Had Joel Schumacher succeeded in making a third Batman movie, there was talk of Stern playing Scarecrow. Barry Levinson reportedly wrote Man Of The Year for Stern, then cast Robin Williams when Stern turned down the role. I enjoyed Private Parts, and I think Stern gives a genuinely good performance in it but I can’t say I’m sad he didn’t continue along this path. He was really good in the role he was born to play: himself. Lurid excess might have been the cornerstone of Stern’s empire as the self-appointed “King Of All Media,” but at least when it came to movies, this savvy entertainer knew well enough to quit while he was ahead.