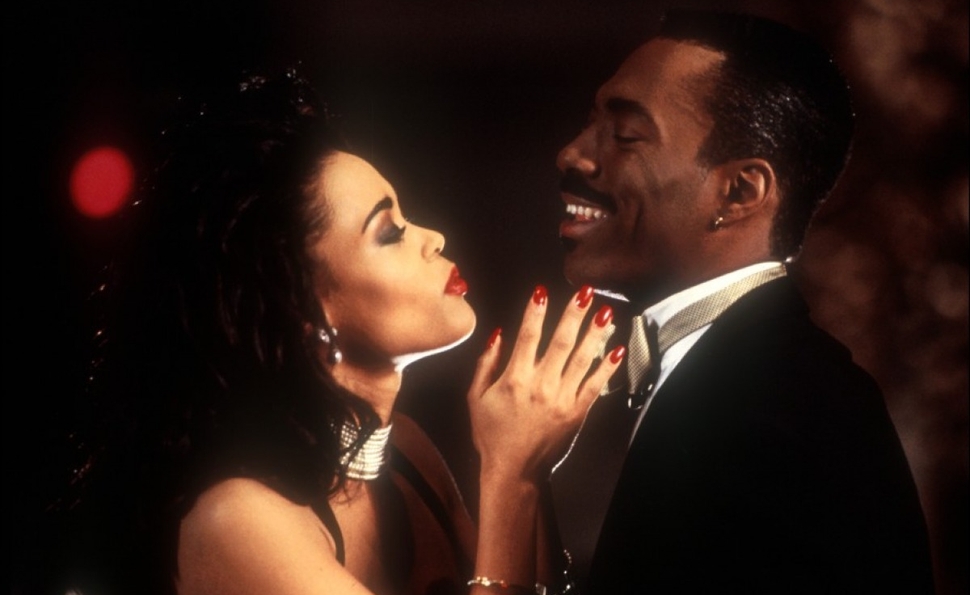 With Boomerang, Eddie Murphy tried reinventing himself as a romantic leading man

For a man who whose most famous stand-up special featured him strutting the stage in a skin-tight red leather suit, Eddie Murphy has never been a particularly sexual screen actor. Despite being handsome and apparently not aging over the past 30 years, Murphy is much more likely to be seen hamming it up in drag, a fat suit, or both, than seducing a woman. That’s a big part of what makes 1992’s Boomerang such an outlier in his filmography. Sure, Murphy was a charming, adorable romantic lead in Coming To America, but that was a fairy tale first, a comedy second, and a romantic comedy a distant third. In sharp contrast, Boomerang afforded Murphy a rare opportunity to be not just romantic, but nakedly erotic, playing a character who frequently and guiltlessly gets with a broad spectrum of women.

Murphy entered the guilt-stricken dad/silly fantasy gimmick/fat-suit portion of his career shortly after Boomerang, but in that one film, he plays a character rarely seen in American films of the time: a black man who’s also a proudly sexual, cultivated professional. Murphy’s Marcus has money and class. He’s assured enough in his place in society that when a snooty high-end clothing store clerk treats him, and friends Gerard (David Alan Grier) and Tyler (Martin Lawrence) with racist condescension, Marcus experiences pity for the racist clerk’s ignorance rather than anger at his bigotry. It’s worth noting that the exchange is also the only scene in the film that suggests the existence of racism. Otherwise, Boomerang occupies a post-Cosby Show realm full of rich, upper-middle-class African-Americans who rarely acknowledge race.

Marcus is a womanizer, a legend among his friends for his way with women, and the trail of broken hearts he’s glibly left in his path. He’s also an advertising executive, the ultimate movie yuppie profession. As the film opens, Marcus tries to get an upper hand in his company’s merger with a company called Lady Eloise by having sex with the company’s voracious figurehead (Eartha Kitt). Unfortunately, he doesn’t realize she has no power, and is just a symbol of her company’s past. The audience is supposed to be repulsed that a woman of Kitt’s age is interested in boning, and amused when a reluctant Marcus insists they turn the lights out first. But Kitt’s performance subverts the sexism and ageism of the writing. She doesn’t play the character as a freak, just a woman in charge of her desires. Her charisma and attractiveness undercuts the film’s sexism, just as it kills much of the comedy. 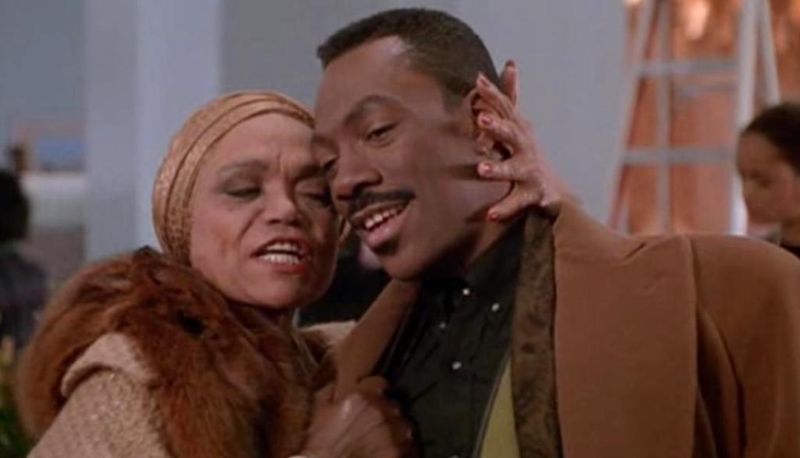 Directed by Reginald Hudlin from a story by Murphy and a script co-written by Barry Blaustein and David Sheffield, Boomerang cannot take a bold step forward without nervously skittering several steps back. The film is simultaneously fascinated with Lady Eloise’s strong, unapologetic sexuality, titillated by her, and more than a little repulsed. And that reaction doesn’t just extend to her, but also to the tellingly named Strangé, whom Grace Jones plays as an extended exercise in inspired self-parody. She’s the face and perverse personality of Lady Eloise’s new perfume, and she’s so comically uninhibited that at a fancy dinner where she sexually propositions Marcus, he needs to beg her to stop saying “pussy” like it’s the secret word on You Bet Your Life. But while the screenplay depicts the character as an outright freak whose life is some bizarre, sexually charged walking piece of performance art, Jones refuses to be reduced to a freak-show. Like Kitt, Jones both curdles the comedy and subverts the film’s strong, confused streak of sexism.

But Kitt and Jones are ultimately secondary characters, women who fall far outside what the film considers socially or sexually acceptable. Our womanizing hero must bed them before he can get to the two primary contenders for his heart, and for what we’re assured is his amazing, amazing ass.

At the time of Boomerang’s release, Robin Givens, who plays Marcus’ boss and lover Jacqueline, was better known for her personal life as the ex-wife of Mike Tyson than she was for a career that peaked with a long-running role on Head Of The Class. She was widely disliked, generally viewed by the public as a gold-digger who married Tyson for his money, then left. This was in spite of her obvious fear of him and his violent reputation. So her casting as a smart, determined woman who isn’t afraid to sleep with a man and then blow him off carried baggage at the time that it doesn’t today.

Boomerang treats Jacqueline as a woman who approaches not just sex, but life, from a stereotypically male perspective. She’s skittish, if not outright hostile, about monogamy and commitment, loves to drink beer and watch sports, and is as aggressive professionally as she is sexually. In many movies, such as Disclosure—which was released around the same time, and has a similar central dynamic where the male lead is passed over for a promotion he was certain he was going to get, only to find it going to a confident, predatory woman he soon beds—a character like Jacqueline would be vilified as a ball-busting shrew, a scheming man-eater out to get all she can. But Boomerang doesn’t treat her that way, and there’s a wonderful reversal after Marcus and Jacqueline have sex and Marcus, who has previously taken great pride in his ability to seduce and then abandon any woman, begins acting like a lovestruck junior-high kid who has just had his heart broken for the first time. In addition to affording Murphy a rare chance to be an erotic figure, Boomerang allows him an even rarer opportunity to be vulnerable. 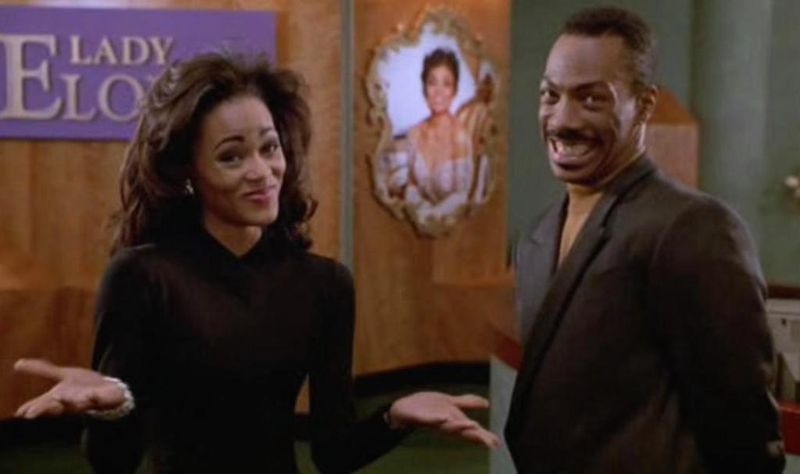 As Marcus wonders why Jacqueline is cavalierly treating him the way he has always treated women, Murphy is as adorable as he is unsympathetic and entitled in the early scenes mapping out his credentials as a world-class womanizer. Boomerang is coarse and unfunny when it devotes itself to bro-talk, most notably due to Lawrence’s presence. He was red-hot at the time, and he’s mainly here to say things like, “How’s the coochie?” and “Something is wrong with the twizat,” which are the kinds of things Lawrence got paid good money to say onscreen during his commercial heyday, despite the film’s occasionally successful aspirations toward sophistication.

Grier comes off much better as the sensitive member of the film’s trio of pals. When he’s set up with archetypal good girl Angela (Halle Berry) and Marcus, being Marcus, can’t help but fall for her, Grier’s confusion and disappointment are genuinely touching. Angela is the one the film ultimately posits as Marcus’ rightful girlfriend, a woman who looks like Halle Berry, but also fulfills the acceptable role of the comforting nurturer in her after-work gig teaching adorable moppets, in addition to being a dynamite cook and an accomplished businesswoman, albeit without the sharp edges that make Jacqueline unpalatable as a permanent partner.

Boomerang is a romantic comedy where the romance and comedy are separated like the meat and the toppings in an old McD.L.T. container. As a romance that asks what happens, as the tagline suggested, when the player gets played, the film is surprisingly compelling and even progressive at times in its unwillingness to demonize Jacqueline for being attractive and having a libido, yet toying with the male lead’s heart and emotions. As a comedy, however, the film is often more subtly amusing than outright funny, apart from memorable contributions from John Witherspoon and Chris Rock.

Re-watching Boomerang, I noticed a lot of lines that were recycled in hip-hop. Of course no movie is truly forgotten, and hip-hop seems to have remembered Boomerang a lot better than the rest of the population. Kanye West, for example, has referenced it repeatedly. Boomerang feels like a Kanye West kind of movie: upscale, sophisticated, sex-positive, progressive—but with a considerable streak of regressive sexism. Ultimately, Boomerang arrives at a pretty conventional moral: It’s okay for a man who seemingly has all the world has to offer, including a line of beautiful women competing to be his bedmate for the evening, to give it up for a monogamous long-term relationship, as long as it’s with the perfect woman. 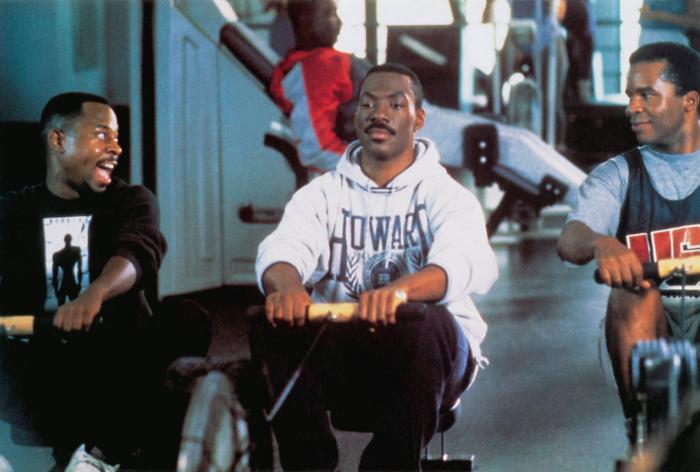 Boomerang is strange to watch from the vantage point of 2015. It’s a romantic comedy that’s really only funny when Rock and Witherspoon are onscreen, and a romance that’s compelling and unusual even though it isn’t particularly convincing, because Berry’s character is far too perfect, more an ideal than a person. Seen today, Boomerang is most interesting as a time capsule of an inspired moment in black pop culture, when In Living Color, Martin, Def Comedy Jam, and PM Dawn (who provide one of the hits from the soundtrack), were all thriving, and it looked like Murphy might be cinema’s next great romantic leading man. It’s too bad that he didn’t make more romantic comedies like this, because he has a real gift for vulnerability. There are moments when Marcus seems to disappear and Murphy emerges, most notably when Marcus is hurting after Jacqueline begins to brush him off. That’s exceedingly rare, considering what a closed-off performer Murphy was and continues to be. Some actors bare their souls every time; Murphy just does the work he’s paid to do, then goes home.

I suspect Boomerang is half-forgotten in part because it represented for Murphy less a new beginning than a dead end. The film did just fine at the box office, earning more than $70 million domestically, and becoming 1992’s 18th most commercially successful film. Yet maybe Murphy felt a little exposed, because before long, he was donning fat suits of all varieties for the Nutty Professor movies (an opportunity to hide not just in latex and stuffing, but also in another filmmaker’s movie and legacy), voicing sassy donkeys, and playing dads who need to learn important life lessons. Murphy seems to have decided what kind of a career he’s going to have and what kind of roles he’ll play a long time ago, and they don’t include projects like this.