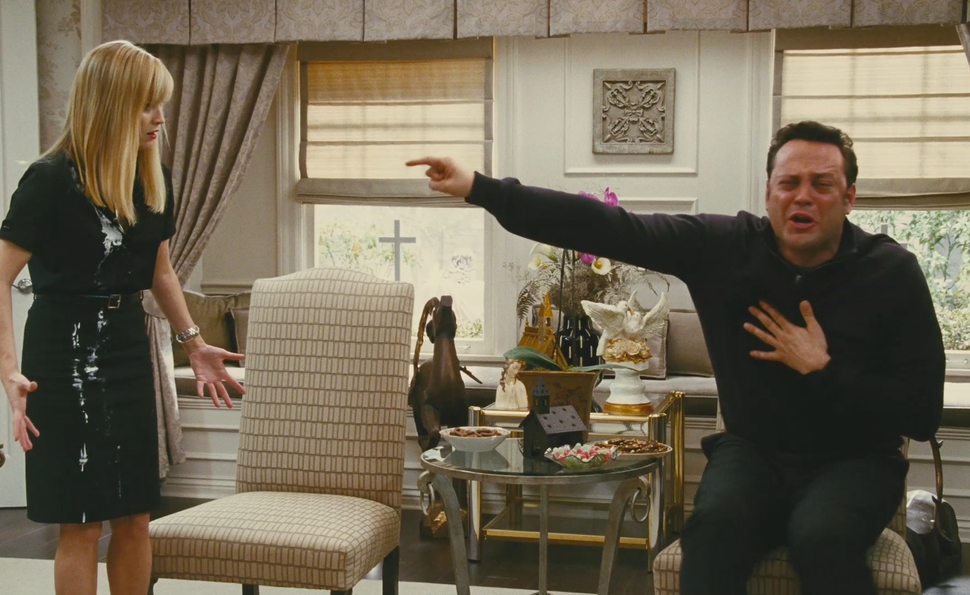 Four Christmases, zero laughs, and a whole lot of nastiness

The repellent Four Christmases, which was the 21st highest-grossing film of 2008, and these days is talked about in warm terms by no one, ever, belongs to the considerable subset of Christmas movies that are 90 percent lump of coal, and 10 percent gaudy tinsel. Four Christmases focuses on Brad (Vince Vaughn), a wealthy lawyer who spends every Christmas in a tropical locale with girlfriend Kate (Best Actress Oscar-winner Reese Witherspoon) pretending to do charity work to avoid their divorced parents. Brad and Kate are impossibly hate-worthy yuppies who answer strangers’ questions about when they’ll finally tie the knot by explaining how they would never be enslaved by such primitive and cruel traditions as marriage or children, and would rather be hunted down and killed for sport in a Most Dangerous Game scenario.

Instead, Brad and Kate luxuriate in their superiority to others, knowing marriage and parenthood would only complicate their perfect lives of enjoying partner massages in Fiji, or pretending to be strangers so they can pick each other up and have hot, unmarried sex in public bathrooms, as they do in an opening fake-out sequence audiences should see coming a mile away.

Brad and Kate are better than others, and aren’t too humble to let them know it. But fate and the gimmicky machinations of screenwriters Matt Allen, Caleb Wilson, Scott Moore, and Jon Lucas interrupt their plan to enjoy another perfect Christmas avoiding their gross, poor, sex-loving relatives when all the flights to Fiji are cancelled. They’re reduced to spending time with not one parent, not two parents, not three parents, but all four of the divorced parents they so actively love to avoid and ignore.

First, they visit Brad’s father (Oscar-winner Robert Duvall) and Brad’s street-fighting brothers, including the mulleted Denver (Jon Favreau) and Dallas (Tim McGraw), who physically assault fancy-pants Brad as a way of saying hello. Normally, viewers’ sympathies would be with the leads, but Brad deserves every bit of physical punishment he receives, and much worse, whether he’s being wrestled by his man-child brothers and nephews, or plummeting off a roof while trying to place a much-resented satellite dish. Imagine dumber, more violent clones of Cousin Eddie from the Vacation movies, and you have a good sense of this particular side of Brad’s family. 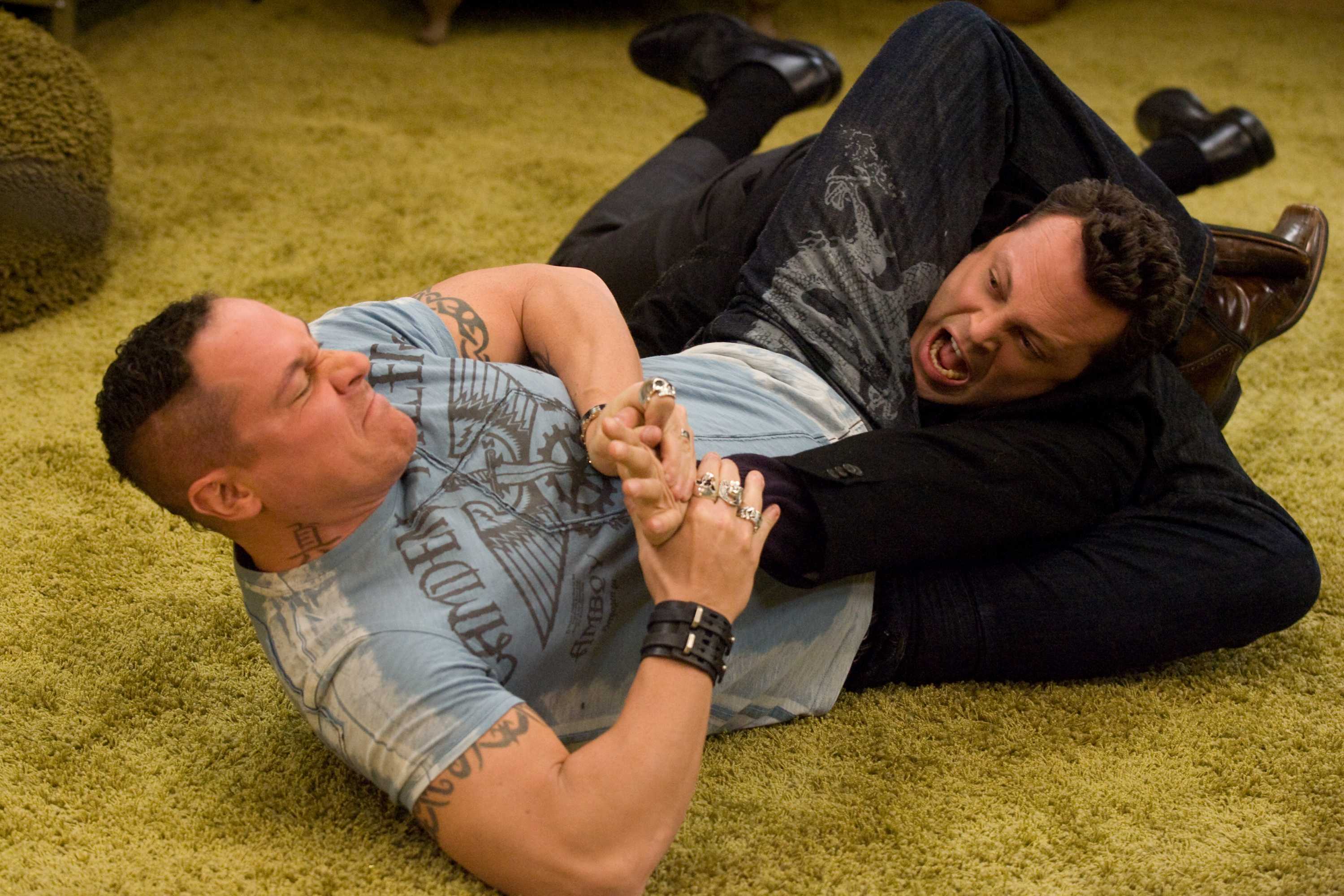 Next up is Kate’s mother Marilyn (Oscar-winner Mary Steenburgen). Four Christmases isn’t shy about broadcasting its misanthropic gags, so before they even leave their vehicle, Kate warns Brad that her family’s house is a “den of cougars.” Sure enough, her family treats Brad like a stripper at a bachelor party, and subject Kate to a “bouncy house” that was the source of her greatest trauma as a child.

Next comes the home of Brad’s mother Paula (Oscar-winner Sissy Spacek), which would be a rare oasis of normalcy if Paula wasn’t enjoying a hot sex life with Brad’s childhood best friend. They’re both only too eager to share the details with the disgusted Brad and Kate, because Four Christmas finds the idea of anybody who doesn’t look like Vince Vaughn and Reese Witherspoon and occupy a top income bracket both gross and hilarious.

At each stop in this Bataan Death March of Christmas cheer, Brad and Kate learn something new and humiliating about each other. At his father’s house, Kate finds out that Brad’s real name is Orlando, because Dad named his sons after the places where they were conceived. (It’s funny because poor people are dumb!) At Marilyn’s house, it’s revealed that perfect Kate was a fat little baby who may have gone through a lesbian stage in high school, which she was possibly too oblivious to understand as such.

These tacky little traumas nearly force a breakup between Brad and Kate, the two worst people in the world, until visit number four calls for the Big Christmas Twist. These occur when the movie, which has previously devoted its entire running time to making family time look about as appealing as shoving rusty nails into one’s own eyeballs, decides that family is what Christmas is all about, and what baby Jesus wants for us all. The unlikely vessel for this pro-family message is Kate’s father Creighton (Oscar-winner Jon Voight), who gives Kate some pro-family perspective. Meanwhile, Brad learns from his own pops that in spite of everything, people really aren’t the worst, they just seem and act that way. 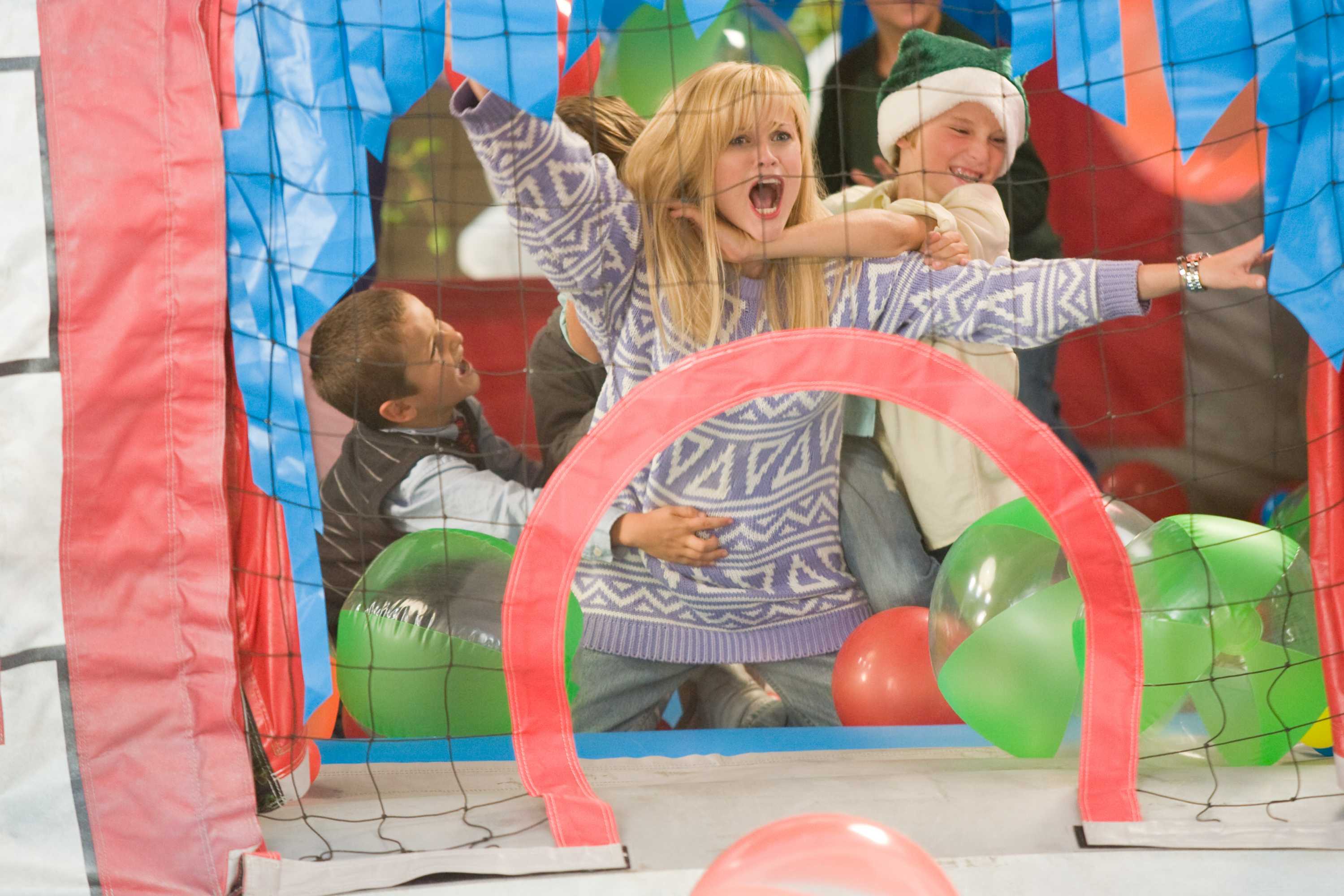 Four Christmases only lasts 80 minutes (once the insanely padded credits are subtracted), or 20 minutes per each unwanted family gathering, but those 80 minutes stretch out into eternity as the film repeats the same sort of sex-phobic, classist gags over and over again. Sometimes that means Kate’s baby-obsessed sister Courtney (Kristin Chenoweth) cavalierly mentioning that she had sex with the entire water polo team in high school, while her husband had same-sex experiences of his own in his past. Somehow, even in 2008, Four Christmases still found homosexuality inherently funny, just like it finds amusement in the idea of naïve poor people whose idea of a fancy hotel is The Radisson. Assuming Four Christmases was not enjoyed overwhelmingly by trust-fund managers and other members of the 1 percent (and considering its healthy box-office, both domestic and abroad, it’s safe to assume its audience, if not its appeal, was pretty broad), it’s difficult to name another movie with this much withering disdain for most of its audience. And its characters. And humanity as a whole.

There is not a single laugh to be found in Four Christmases. The only time I chuckled at all through this experience was at the absurdity of having to write “Oscar-winner” five (five!) separate times when writing about a movie The Lifetime Network would have rejected as alternately too raunchy and too wimpy. After many mean, smug gags that never land, Four Christmases goes limp and gushy in its final 15 minutes during a long, joke-free segment where Brad and Kate concede that maybe there is something to this whole marriage-and-family thing after all.

The ostensible arc of Four Christmases should be Brad and Kate realizing just how arrogant they’ve been in judging everyone else’s lives as so inferior and repugnant. Then they could join the brotherhood of man, newly appointed as people who view family as something other than disgusting. But the couple seems just as smug at the end as they were at the beginning. For all they endure, Brad and Kate’s humbling remains a mild one, and they end the film still clearly feeling superior to everyone else they encounter, a viewpoint the film inexplicably seems to share.

Four Christmases should at least soften at the end, when Brad and Kate do the unimaginable/completely expected, and roughly a year after the titular Christmas boondoggle, welcome a baby of their own. Given the half-assed, “Christmas is about family, and family is good or something, when it’s not actually the worst thing in the world” message of the film’s last 15 minutes, it feels like Brad and Kate should want to have their extended family with them during delivery, that Spacek, Duvall, Voight, and Steenburgen would all return, and all would be forgiven and forgotten in the golden glow of new parenthood and the miracle of a new baby.

But nope, Brad and Kate don’t even tell their parents they’re expecting, so when the adorable little baby is born, the extended families are nowhere to be found. Only a reporter spilling the beans on their little bundle of joy, since the baby is the first one born on New Year’s Day, alerts others to its existence. In a moment that encapsulates the film all too neatly, Brad and Kate’s baby begins life by projectile-vomiting all over Kate’s face. It’s apparently the film’s way of saying, “God bless us, every one!”