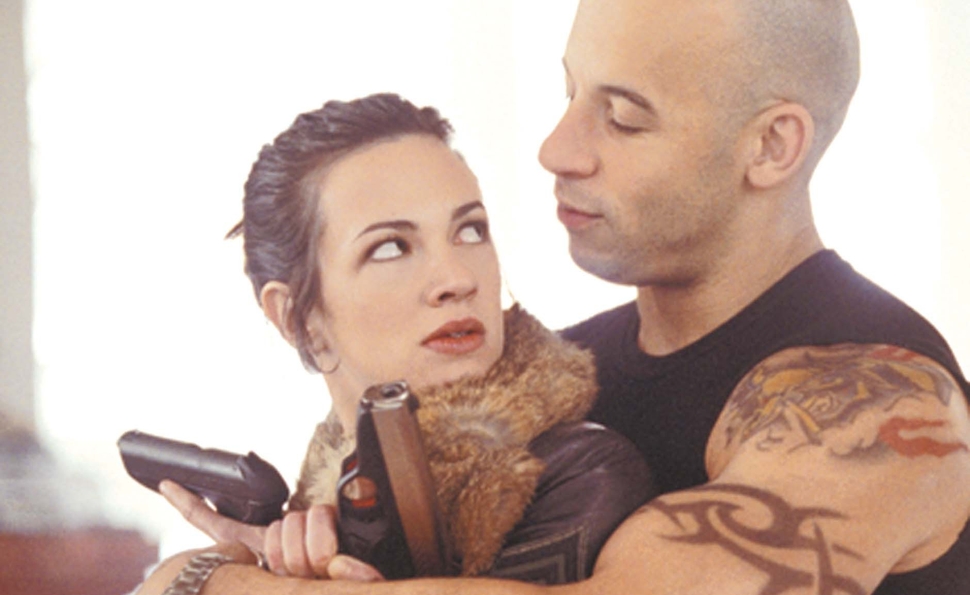 For more than half a century, James Bond has been good enough. In fact, he’s been more than good enough: He’s been the gold standard for dashing, continental secret agents. Every other secret-agent series has been doomed to live in Bond’s outsized, impeccably styled shadow, even those starring such hep cats as Frank Sinatra (the Tony Rome series), James Coburn (Our Man Flint and its follow-ups), and Dean Martin (the Matt Helm series). In pop culture, you can’t get any cooler or more iconic than Sinatra—unless you’re James Bond.

But sometime around the turn of the last century, Sony determined that, contrary to popular opinion, James Bond was no longer good enough. Previous generations might have thought he was somehow cool, with his gadgets, women, tuxedos, and droll bons mot, but for the current generation of Mountain Dew-chugging, bungee-jumping, fire-breathing extreme-sports maniacs, James Bond was insufficient. Though granny might have thought Sean Connery as Bond was “hep,” the character had never known the loving, burning touch of a tattooist’s needle. James Bond certainly did not have his logo tattooed across the back of his neck, nor did he ever film videos where he drove a Corvette off a bridge while making a bold stand for videogames and violent rap music. James Bond was a boring old spy, not an extreme-sports superstar with shadowy links to the underground and potentially illegal websites. Could he be any more of a tired anachronism?

In other words, James Bond did not behave like a stupid, pandering cartoon of X Games culture, a Poochie conception of what the kids want out of a totally extreme, in-your-face secret agent. He didn’t have to, because he was James Bond, and it would have been beneath his dignity to behave like such a Red Bull-addled stooge.

xXx begins with a Bond-like agent in expensive clothes being pursued by anonymous henchmen through a city street. In a bid to escape, he stumbles upon a Rammstein concert so badass that one of the performers shoots fire at the audience during the show. Real fire! This is clearly too much extremeness and attitude for this namby-pamby secret agent to endure. So he ends up dead, his corpse being obliviously passed along the crowd as a form of posthumous crowd-surfing. The implication is clear: James Bond, or at least a James Bond proxy, can’t handle a world this extreme, this intense, this in-your-face. The prospect of crowd-surfing atop so many tattooed, pierced, multicultural souls—all listening to loud music at the same time—would have sent James Bond into a panic attack. He’s probably lucky he ended up dead mere moments after encountering such a frightfully intense scenario.

But instead of valeting the gentleman’s car, this tattooed, rebellious figure roars out of the country club at top speed and finds his associates at a predetermined meeting place. They strap recording devices and small Sony video cameras throughout the car so that, while being pursued by the police, Xander can make a viral video in which he addresses the Sony cameras directly, stiffly intoning:

These monkeys are following me because I just took this car. Obviously the car doesn’t belong to me. It’s not my style. It belongs to Dick. Dick Hotchkiss, the California state senator. You remember Dick. He’s the guy who tried to ban rap music because he feels that the lyrics promote violence. It’s music, Dick! He’s also the guy who wants to pull every videogame off every shelf in the country. Because he feels that the videogames diminish the intelligence of our youth. C’mon, Dick. It’s the only education we got. Dick, you’re a bad man. You know what we do to bad men? We punish them. Dick, you’ve just entered the Xander Zone.

After uttering what is apparently his catchphrase, Xander rides the Corvette off a bridge using a ramp, then parachutes out of the car before it explodes, delivering one final bon mot for the camera as he glides down elegantly: “The moral is, don’t be a dick, DICK.”

From a stunt perspective, it’s a hell of a sequence: A man seamlessly races a car off a bridge, then parachutes to safety hundreds of feet below while the cops can only look on in disgust as he floats away. From a storytelling perspective, however, it couldn’t be less effective. xXx needs us to believe in Xander’s inveterate, world-class awesomeness, yet the film introduces its hero by having him stiffly perform the world’s worst YouTube editorial, a mealy-mouthed, torturously written little spiel that derives all of its comedic punch from the fact that “Dick” is both a shortened version of Richard, the politician’s name, and a euphemism for male genitalia. This is the guy who’s supposed to be cooler than James Bond? This is the guy we’re expected to not only root for, but also admire? This is the man who inspires hero worship in everyone around him, even his ostensible peers?

Xander rides a motorcycle back to a giant loft where a party is in full swing, where he’s accosted by a sexy stranger who insists that a world-class athlete of his stature deserves a videogame of his own. This brings down the wrath of Xander’s friend, co-worker, and possible employer J.J. (Eve), who gets in the stranger’s face and tells her, “You know [Xander is] never going to sell out, right? That’s why he is who he is.”

J.J. runs an underground website that apparently makes money by showing illegal videos of super-famous athletes committing crimes in the name of the public good, a proposition that raises a host of questions. Is Xander’s full-time job taping himself doing illegal things for public consumption? Or was the bridge stunt a one-time proposition, and he earns his livelihood elsewhere? Does he have a sponsorship, or does he compete for prize money, or is he so fucking amazing that people just hand him fistfuls of cash for being who he is? And for a man whose defining feature is that he will never sell out, isn’t Xander, with his self-referencing catchphrase, neck tattoo of his logo, and love of small but dependable Sony electronics, a little obsessed with branding? It’s almost as if this pandering piece of corporate product isn’t as subversive as it professes to be.

Xander’s world-class badassery brings him to the attention of Agent Augustus Gibbons (Samuel L. Jackson), a severely burned, top-level government operative who runs a program that recruits criminals and totally in-your-face rebels to go on government missions because they are, in his words, “Programmable, expendable, and they work.” Gibbons’ logic is impeccable: Is there anyone more programmable than people specifically sought out for their hatred for authority and contempt for rules? Clearly these violent, anti-authoritarian lunatics are the perfect people to serve as government stooges.

To test Xander, Gibbons has him abducted and knocked out, then dropped in a phony diner where a hold-up occurs, which Xander instantly recognizes as both phony and a test. He passes the test, and then he’s dropped off in an unnamed land and confronted with a machete-wielding El Jefe (Danny Trejo, naturally enough). Xander wrongly assumes this is a test as well, so he does not take it seriously, and instead spends his time insulting El Jefe and his henchmen. 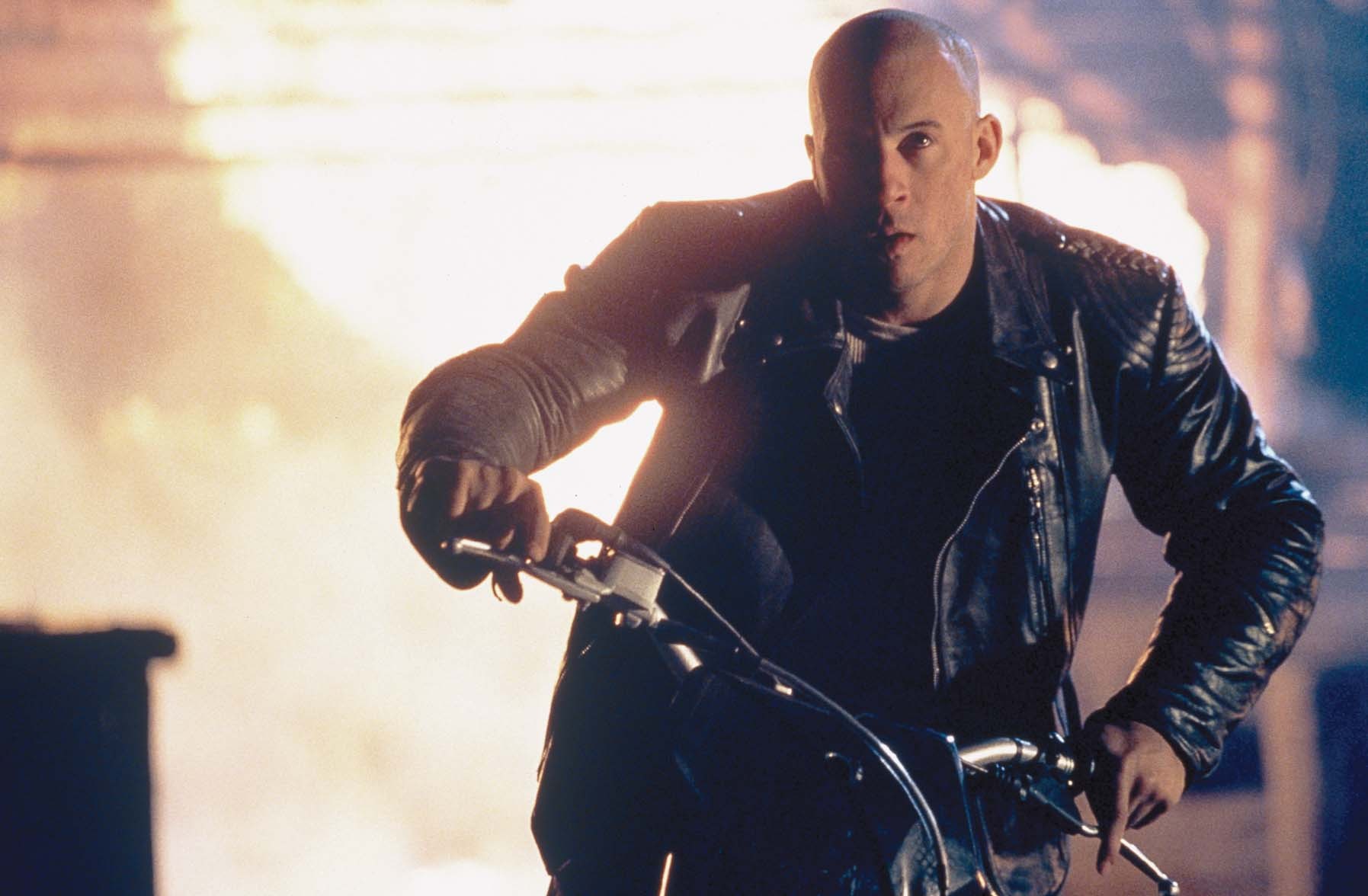 I assumed xXx had been created specifically for Diesel (who also executive-produced), to capitalize on the intense heat of his star-making performances in Pitch Black and The Fast And The Furious. So I was surprised to learn that Eric Bana was reportedly the original choice for the lead. Bana played the Incredible Hulk (or at least his alter-ego) as a sober, tragic man of science, so I would like to think he was too dignified to play a man who’s essentially a sentient Mountain Dew commercial. Which led me to wonder if anyone could have convincingly played Xander Cage. Could a young Steve McQueen have pulled it off? A more buff Ryan Gosling? A similarly muscle-bound Dwayne “The Rock” Johnson or a young Arnold Schwarzenegger? I suspect each of them would have done a better job as Xander Cage (hell, I’ll throw Eric Bana into that category as well) than Diesel, but the problem is as much with the role as the actor playing him.

Up next: The Trial Of Billy Jack