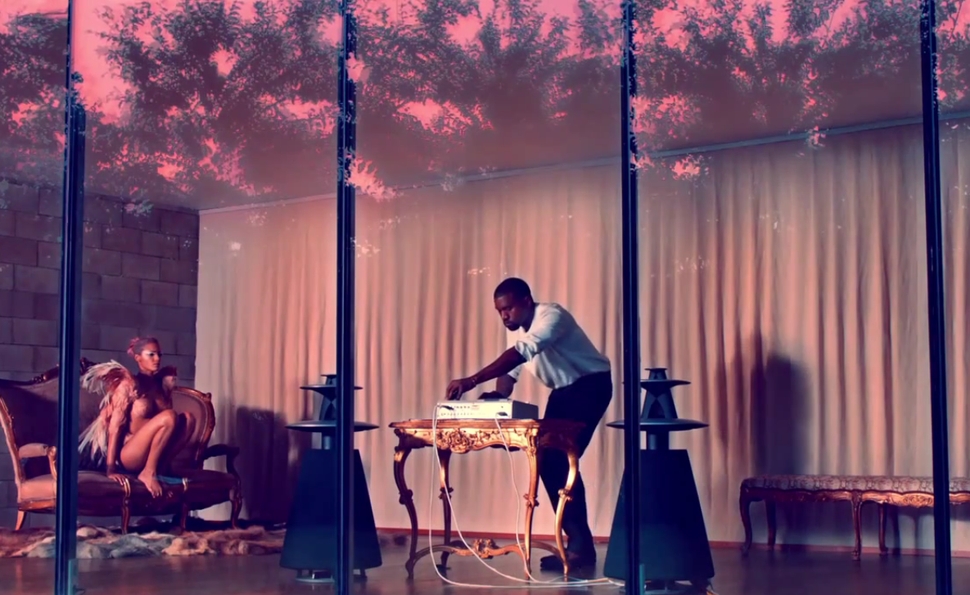 Like David Bowie, Kanye West has made the act of being himself into his magnum opus. Kanye is the text, and all the other stuff—the music, fashion line, interviews, headline-commanding public appearances, constant persona swaps—are just facets. This isn’t some masturbatory, LaBeoufian exercise in performance art. But there’s no denying that when a dude steps up during a telethon for hurricane relief and calls out the sitting president on charges of hardcore racism, he’s probably got more on his mind than making hits and playing nice.

One surprisingly under-acknowledged aspect of West’s output is his small yet fascinating filmography. His ambition has had a cinematic bent from day one. The sheer bigness of his ideas is too titanic to be constrained to a form as pedestrian as the music video. Mere mortals release albums and shoot a few clips to accompany the singles. When Kanye West decides to release an album, he does things like co-direct short films with exciting auteurs. Or create an art picture so ravishingly opulent that Federico Fellini might call it a little much. Or eat up seven screens to create a once-in-a-lifetime event at Cannes. In other words, Ye’s doing Ye, and that extends to his experiments with film. All three West-directed short films represent a characteristically unapologetic, raw extension of their creator’s psyche.

West has been the guiding creative force behind three short films. After he and Spike Jonze collaborated for the “Flashing Lights” video, they co-directed a 14-minute short called “We Were Once A Fairytale” in 2009, as an expanded version of the video for the 808s & Heartbreak single “See You In My Nightmares.” A year later, West debuted “Runaway,” a 35-minute art film to accompany the release of his fifth studio record, My Beautiful Dark Twisted Fantasy. His third project was no pedestrian movie; “Cruel Summer” was a 30-minute multi-screen cinematic experience that blew minds and eardrums at Cannes 2012. Each film is denser, darker, and more psychotically ambitious than the last—viewers can practically sense West’s boredom with the constraints of film as he evolves beyond character, dialogue, and the limits of a normal frame. The three shorts’ main point of connection is West himself, as each burrows a little deeper into his lavish, fuming id.

West’s ability to simultaneously self-aggrandize and self-efface has made him the polarizing figure the public loves to hate, and his films place that contradiction front and center. “We Were Once A Fairytale” finds a lightly fictionalized version of West drunk as hell and acting a fool up in the club. After clumsily failing to impress women with his status as a celebrity, and generally embarrassing himself, West stumbles into the bathroom, where he stabs himself with a conveniently available  knife. Instead of viscera, however, rose petals spill forth from West’s wound, along with a little stop-motion critter credited as “Henry” (a nifty throwback to Charles, the anthropomorphic dog-headed man from Jonze’s video for “Da Funk” by Daft Punk). The film shows both sides of Kanye—the self-proclaimed International Asshole, and the hurting, artistic soul—without using one to explain away the other.

West fully embraces his defining paradox in “Runaway,” juxtaposing triumph with despondence, sometimes in the course of a single scene. He stars as Griffin, who discovers a fallen phoenix in the shape of runway model Selita Ebanks. The film is light on dialogue and heavy on musical interludes, but the few scant conversations between Griffin and the phoenix speak volumes. West frames up the phoenix as an avatar for himself, an embodiment of the “childlike innocence” he mentions in “POWER,” the song he plays for the phoenix on a drum machine in an early scene. “Do you know what I hate most about your world?” she asks. “Anything that is different, you try to change. You try to tear it down.” After she tells Griffin that phoenixes turn to stone when de-winged, West posits himself as too creatively pure for this compromised world.

That statement requires either complete self-delusion or cojones of unimaginable proportions, but he offsets the sentiment with an earlier scene. Standing atop a piano, Griffin sings the title track, a “toast for the assholes,” for a party of assembled guests. He occasionally uses obtuse symbols (he spins a creepy parade float of Michael Jackson as representative of the destructive effects fame has on people’s mental health and personal lives), but always clearly illustrates his troubled relationship with life in under constant public scrutiny. Attention and power can make a jackass—President Obama’s semi-friendly description of West, not mine—out of anyone. All people can hope to do is embrace it.

West finds time in “Runaway”’s 35 minutes to address two of his other pet concerns: the politics of race and his rocky relationship with religion. Seemingly intent on crystallizing every big idea rattling around in his brain, West takes white America to task during the dinner scene where he performs “Runaway.” He flips the usual script by creating a photo-negative portrait of hegemony: Black guests clad in elegant white formal dress sit at a long table, tended to by white servers.

Ever the liberal sampler, West jacks imagery from Fellini and Luis Buñuel in the scene to give God a shout-out as well. The evening’s cuisine includes loaves and fishes, not to mention the mysterious pink beverage evoking the taking of Communion. He taps into loaded religious iconography, but the tone of the scene reveals West’s troubled place in it all. Griffin and his phoenix girlfriend attract stares of judgement and furtive whispers; one partygoer points out that his new squeeze is a bird. (Griffin replies that he hadn’t noticed.) At this austere church ceremony, they stick out like a sore gold-plated talon.

It’s difficult to parse out how “Cruel Summer” fits into this reading, mostly because information on the film is in drastically short supply. It can’t be watched online or On Demand; those two puny methods of exhibition crumble under the weight of West’s audacious seven-screen vision. All interested parties have to work off of is the rapturous reports that flooded out of “Cruel Summer”’s Cannes screening in 2012, and the following plot summary: “Rafi (played by Scott Mescudi, better known as Ye protege Kid Cudi), a high-end car thief, falls in love with a blind Arabian princess whose father (Ali Suliman) will only allow them to wed if he can pass a series of three challenges. Loosely based on old Arabian folk tales, the story culminates in a final challenge where Rafi must cure the Princess of her blindness in order to gain her companionship.” But is deliberately creating the thousand-dollar designer veil of secrecy shrouding “Cruel Summer” not the most classically Westian move imaginable? Only someone blackout drunk on his own mythology would have the temerity to build what all accounts indicate is a standard-shattering film, but conceive it in such a way that no one could see it after its première—and only a few could see it then.

The question of what Kanye West’s films are “about” has a long answer and a short answer. They’re about fame, religion, racism, music, art, politics, death, life, and whatever else might be left over after he’s covered all that. But the short answer is that West’s one true subject is West; he filters all thematic concerns through his engrossing public profile and stubborn unknowability. Self-involved? No doubt. But West redeems his extreme narcissism by turning it into a virtue, inflating his navel-gazing until it reaches an operatic, hallucinatory high. He picks through his own id with a grandeur befitting Alejandro Jodorowsky (not coincidentally, West’s professed chief influence on his consciousness-expanding Yeezus tour). West makes no distinction between the intimate and the epic, because in his world, nothing is more epic than being Kanye West. Leave it to West himself to provide his most succinct, perfect statement of purpose as an auteur: “My life is dope and I do dope shit.”