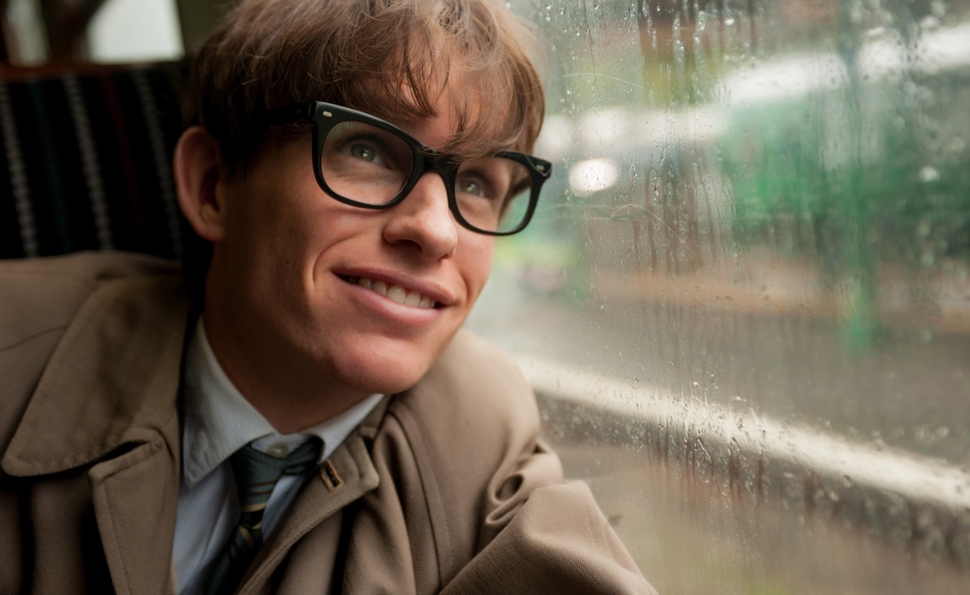 In the mad scramble to declare something—anything—the Oscar frontrunner at a Toronto International Film Festival conspicuously bereft of a 12 Years A Slave or a Gravity, awards pundits rallied around The Theory Of Everything, a biopic about theoretical physicist Stephen Hawking. (They’ve since moved on to another biopic, The Imitation Game, starring Benedict Cumberbatch as Nazi code-breaker Alan Turing, which won the prophetic People’s Choice award.) Though deeply unnecessary—Errol Morris already found meaningful connections between Hawking’s life and his ideas in his great 1991 documentary A Brief History Of Time—The Theory Of Everything isn’t an example of a bad biopic of a genius per se, but it’s a fine example of a typical one. It’s well-acted, attractively photographed, and certain to inspire audiences with the broad strokes of Hawking’s life, without communicating why that life was of any specific importance. It’s like Stephen Hawking was born not to speculate about black holes and the origins of time, but to make us feel great about ourselves.

I’m generally not in the habit of telling filmmakers what to do, so much as reacting to what they’ve done. But the biopic genre needs a Martin Luther—or a Lars von Trier—to nail a few basic tenets to the church door, rather than allowing the production of yet another one-size-fits-all profile of a beautiful mind. With that (and The Theory Of Everything) in mind, I humbly offer five simple rules for making a biopic about a genius:

The major events of a person’s life don’t break down neatly into a three-act structure. Perhaps there are formative events from childhood that account for a person’s astounding achievement as an adult, and perhaps there’s something alluring about capturing the full scope of a single life, from birth to death. But inevitably, biopics that cover decades of turmoil—and their attendant need for old-age makeup and ash-gray wigs—are going to be lumpy and misshapen, covering a series of incidents that feel as disorganized as life itself. There may be some veracity to the approach, but narratively speaking, it replaces story arcs with a sequencing that’s more like “and then this happened, and then this, and then this.” The Theory Of Everything isn’t a birth-to-deather, but it follows Hawking from when he was a student at Cambridge and met his first wife Jane Wilde to the end of their 25-year marriage and beyond. It could be argued that it works within the discrete parameters of that one key relationship—the film is, after all, based on Wilde’s book, not Hawking’s—but it covers an awful lot of ground.

Contrast that with Topsy-Turvy, Mike Leigh’s wonderful biopic about Gilbert & Sullivan, which limits its scope to the 15-month period in which composer Arthur Sullivan and playwright W.S. Gilbert collaborated on one of their most celebrated works, The Mikado. Leigh gets at the essence of that partnership—their specific roles, their personal friction and affection, their unique creative alchemy—while understanding the importance of The Mikado at that tenuous point in their careers, and the particular inventions and mores of the years 1884 and 1885. No doubt the making of The Pirates Of Penzance would have been tempting to include, as would the origins and/or end of their partnership, but life is too messy to be left unshaped and unstructured by dramatists. Choices have to be made.

In Ed Harris’ lifeless biopic Pollock, abstract-expressionist painter Lee Krasner considers the splotches of paint that cover a large expanse of canvas at her feet. “You’ve done it, Pollock,” she exclaims. “You’ve cracked it wide open!” And with that, the Jackson Pollock who would galvanize the art world is born. “You’ve done it, Pollock! You’ve cracked it wide open!” has become a go-to ironic expression for mundane breakthroughs of all kinds—finding the optimal toaster setting, pouring beer with minimal foam, et al.—but it’s also a fine example of the common biopic sin of not allowing genius to be self-evident. Whenever characters stand around talking about a person’s brilliance, that means the filmmakers haven’t adequately conveyed why that person is brilliant. Or worse, they don’t trust the audience to come to that conclusion on its own. 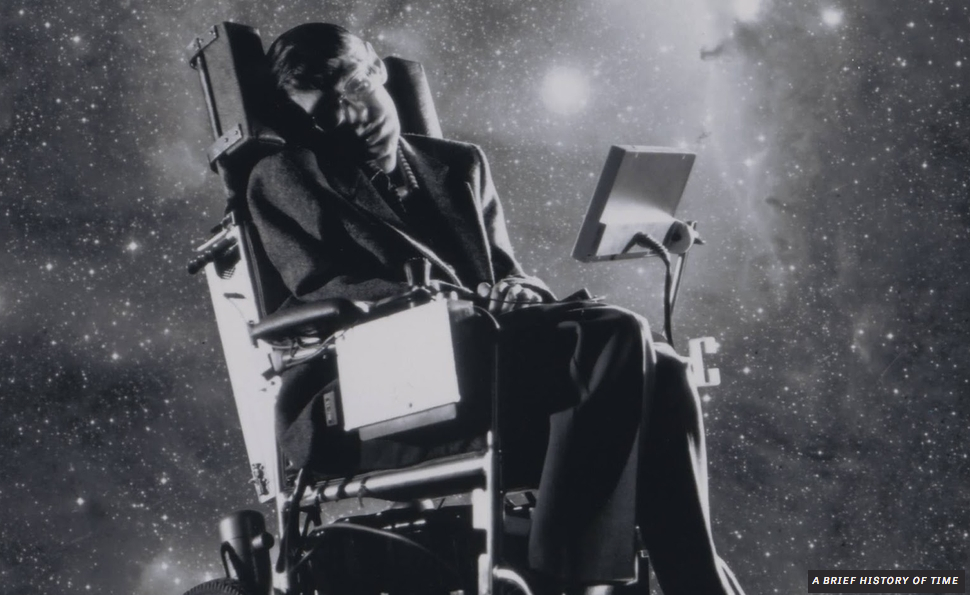 The Theory Of Everything isn’t the worst offender, but it’s more interested in the condition of Hawking’s genius than its specifics. Where A Brief History Of Time used computer effects to illustrate the complex abstractions in Hawking’s book, The Theory Of Everything has scenes like Hawking filling up a blackboard with awe-inspiring mathematical gibberish, or casually scoring seven out of eight on a test that has thoroughly stymied all the other advanced physicists at Cambridge. It’s the clearest sign that we’re to be inspired by Hawking the man—his triumph over adversity, his preternatural brilliance, the active mind cocooned inside a broken body—while understanding virtually nothing about the importance of his ideas. Even A Beautiful Mind attempted to put the inner workings of its hero’s schizophrenic, delusional brain in clear visual terms.

3. Do it for the right reasons.

There’s a fundamental question that many biopics have trouble answering: Why are we telling this person’s story? Too often, the real answer is, “To make the audience feel good about themselves.” Breathless reports that The Theory Of Everything got a standing ovation after its premiere at Roy Thomson Hall at TIFF are equivalent to reports that a network sitcom had people in stitches. Just as a laugh track cues the response to the sitcom, a scene in Theory Of Everything where people actually stand and applaud for Hawking is meant to cue a response to the film. Hawking’s legacy is not in science, the film implies, but in showing other people that anything is possible. That could be the message of virtually any genius biopic, and it’s as banal as things get.

That’s a key stumbling block for biographies of any kind. How do you make a meaningful connection between a person’s life and work? How do the facts of their life illuminate their unique contribution to humankind? Hawking was married twice, has a child, survived a diagnosis that gave him two years to live, wrote a rare scientific bestseller. What does all that add up to, other than a bunch of stuff that happened? The truth is, the nature of genius is more elusive and enigmatic, and nearly impossible to capture in biographical details alone. And when a film like The Theory Of Everything tries to tally these details into the sum of a great thinker’s life, it’s being made for the wrong reasons.

Many of the best biopics are conceptually bold, finding some equivalent visual language to account for why their subject is so special. Morris did this with A Brief History Of Time through his now-more-familiar mélange of effects and/or re-creations, and the hypnotic montage of visualized abstractions and a pulsing Philip Glass score. Not every short film in Thirty Two Short Films About Glenn Gould is inspired, but given the problem of a reclusive, eccentric, difficult classical pianist, director François Girard and co-writer Don McKellar attacked it from every angle they could—documentary segments, stagings of key biographical scenes, animation, impressionistic fragments, and as much of Gould’s music as they could squeeze into the whole package. It’s a tacit admission that getting to know a genius like Gould is not only impossible, but undesirable; seeing him as a complex, multi-faceted, and fundamentally unknowable talent is enough. 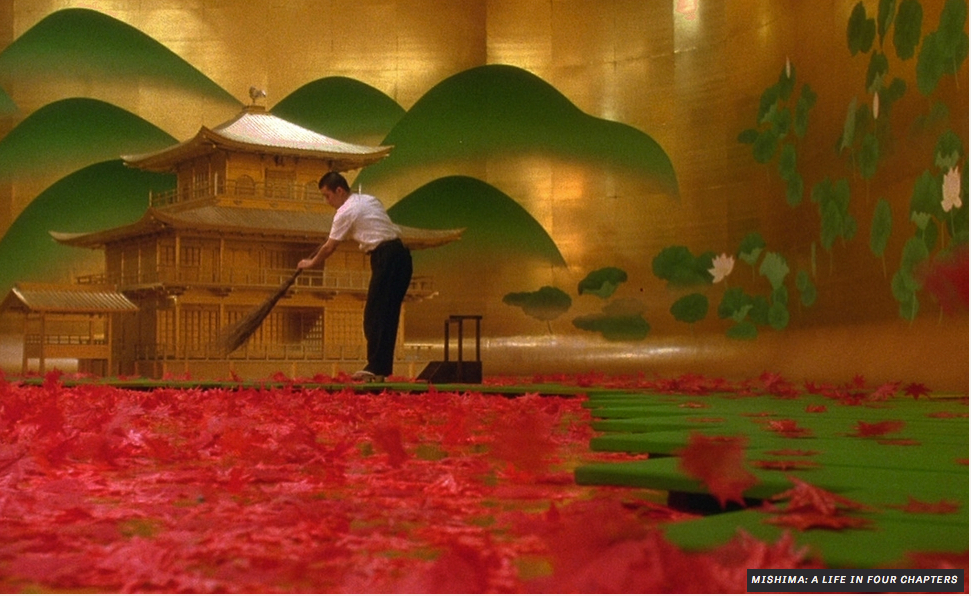 Better still is Paul Schrader’s approach to Yukio Mishima, a provocateur whose life and art—as novelist, poet, playwright, film director, political firebrand, sexual adventurer, and swordsman—resists any kind of biopic containment. Schrader’s Mishima: A Life In Four Chapters flashes back from the last day of Mishima’s life, when he put on a uniform and committed ritual suicide, to four extended segments (Beauty, Art, Action, and Harmony Of Pen And Sword) that combine to address the whole of his legacy, and the meaningful interaction between his real-life persona and his fiction. With particularly gorgeous contributions by Glass (again) and set and costume designer Eiko Ishioka, Schrader contrasts black-and-white scenes from Mishima’s life with dramatizations of his short stories in eye-popping primary colors. It’s as much about the disconnect between different sides of himself as the clear associations, and it’s a flexible enough conceit to cover an artist of many hyphenates.

Jesse James and the James-Younger Gang cut a vast criminal swath across the Heartland, robbing banks and killing upward of 180 people, enough to make him such a legend in his own time that his own murder, at the hands of Robert Ford, was related as much to fame as malice, greed, or ambition. But in the grand tradition of revisionist anti-Westerns, he’s the hero of The Assassination Of Jesse James By The Coward Robert Ford—ruthless and powerful, to be sure, but a truly awesome presence, less a violent man than a brilliant force of history. It wouldn’t be accurate to say the film is sympathetic toward him, but a vicious killer he is not, and the portrait is richer for it.

On the flip side, Steven Spielberg’s Lincoln shows proper admiration for Abraham Lincoln as he led a fractured nation to pass the 13th Amendment against long odds. Spielberg and screenwriter Tony Kushner limit themselves to the final four months of Lincoln’s life—see Rule #1—showing the Great Emancipator as the Great Horse Trader, a savvy negotiator who was not above underhanded political tactics if they led to the right end. He’s not the cardboard saint of elementary-school history books, but a president who recognized that virtue alone wasn’t going to the job done. He had to get his hands dirty. Democracy is ugly, and there’s no value in clinging to righteousness if nothing gets accomplished because of it.

The common denominators of the great genius biopics: Establish strict parameters, focus on the work first, and let everything flow from there. Otherwise, the main takeaway is that Jackson Pollock was kind of a jerk.