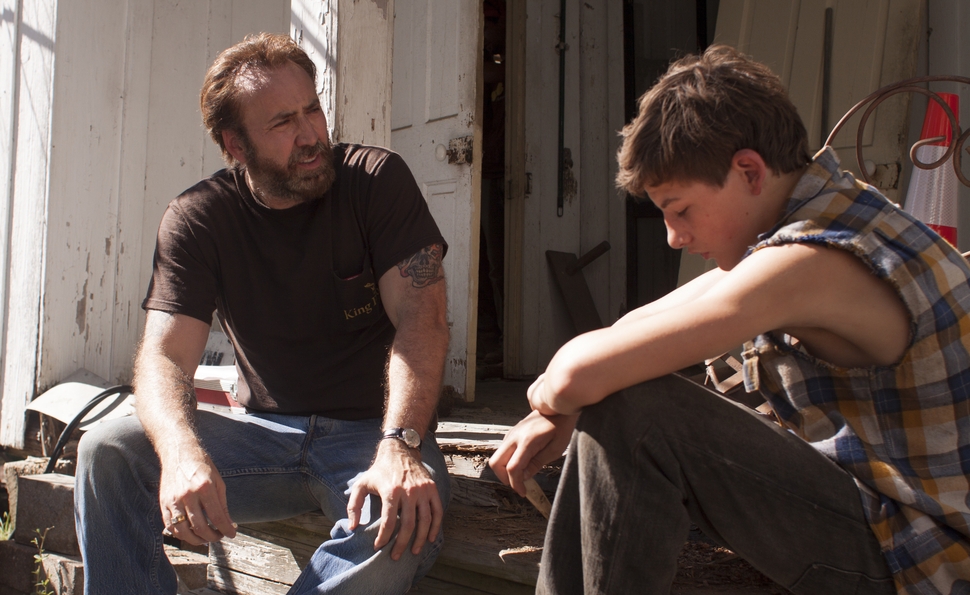 Nicolas Cage’s initial appearance as the title character in Joe, the latest film by David Gordon Green, offers some of the most startling moments in the actor’s long career. Joe is first seen sitting in the cab of a truck, listening to a weather report on the radio. Believe it or not, Cage actually sat in the truck for the duration of the scene (which likely involved multiple takes), and the radio he’s listening to is real. That’s just the beginning, though. A few minutes later, Joe sits at the kitchen table in his ratty apartment, checking figures in a notebook and performing some simple calculations on an adding machine. How many crazy .gifs and image macros of Cage silently tapping keys will flood the Internet when Joe comes out on video? Hundreds? Thousands? And no sooner is that madness over then Green and Cage collaborate on their pièce de résistance: Joe falling asleep on the couch while watching TV. Sound asleep. Who but Nicolas Cage would dare to feign unconsciousness onscreen, especially when his character is meant to be enjoying the news? It’s the weather report again, by the way. Typical Cage: This dude practically snorts the weather.

End of sarcasm. Nicolas Cage does not lose his shit in Joe—not much, at least. Critics have justifiably praised it as his most restrained and nuanced performance in years. Collectively, the reviews welcome him back from a long period in the wilderness, saying that Joe “is Cage’s periodic reminder that he’s one of his generation’s great talents” (L.A. Weekly) and “stands as a reminder of what a terrific actor Cage can be when he is able to harness and channel his wilder impulses” (The Guardian). That assessment isn’t wrong, exactly, but it is somewhat misguided. Cage isn’t Robert De Niro—a once-brilliant actor who’s grown lazy and can only rarely be stirred to exert himself the way he once did on every picture. If anything, Cage has the opposite problem: When stuck in a mediocre film, he feels compelled to try to rescue it singlehandedly. What’s singular about Joe isn’t Cage’s performance per se; it’s that Joe is the first movie he’s appeared in since Werner Herzog’s Bad Lieutenant “remake” that isn’t a blatant hunk of junk. Green knows what he’s doing, and that means that Cage is free to serve the material. He can relax.

There was a time, decades ago, when the prospect of a “mature” Cage would have been terribly depressing. What was electrifying about him in his youth was his expressionistic fervor, which stood in sharp contrast to the Method-inspired naturalism that had been the dominant acting mode in American cinema since the mid-1950s. Every Cage performance was a unique high-wire act, and his antics quickly became legendary. He had two of his teeth pulled to play a wounded Vietnam vet in 1984’s Birdy. He ate a live cockroach in 1989’s Vampire’s Kiss. He had sex with Cher in 1987’s Moonstruck. That may sound like mere showboating, but it wasn’t. More than any other actor of his generation, Cage seemed to actively strive to redefine how screen acting can arrive at the truth. He used his instrument—voice, facial expressions, body language, even posture—the way German production designers built sets in the 1920s. And it worked, for the most part, because he was performing these experiments in movies directed by the likes of David Lynch, Alan Parker, the Coen brothers, and his uncle, Francis Ford Coppola. Stick him in a generic action movie like 1990’s Fire Birds, on the other hand, and he had no idea what to do. 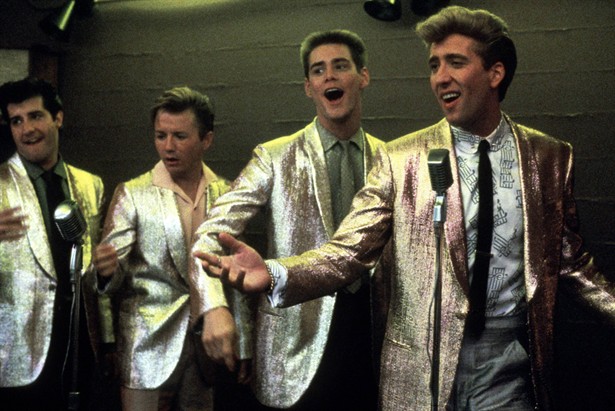 Even when cast in worthwhile films, Cage sometimes failed to recognize that a full-throttle approach was inappropriate. The most dramatic collision occurred in 1986’s Peggy Sue Got Married, for which Cage somehow persuaded Coppola to let him play the title character’s husband (in the present) and boyfriend (in the past) with a severely adenoidal vocal range, so that he constantly sounds as if he’s just taken a very small hit from a helium balloon. Viewed in a vacuum—via clips on YouTube, say—it’s amazing stuff, thrillingly risky and at times oddly moving. But it’s so completely at odds with the gently satirical tone Coppola establishes everywhere else that Cage threatens to capsize the movie every time he appears. A contemporary equivalent would be Cage playing Joe with a voice like Tom Waits. It might very well be fascinating, but it wouldn’t be in the film’s best interest. That’s the lesson he appears to have learned along the way… which is why nowadays, unless a film legitimately calls for sheer recklessness—as Herzog’s Bad Lieutenant certainly did—he tends to save his more outré experiments for his plentiful paycheck roles.

Some folks date the severe shift in the quality of projects Cage chooses to the immediate aftermath of his Oscar win for 1995’s Leaving Las Vegas. That hypothesis doesn’t really hold up, though. For one thing, he’d started making bad movies before snagging the statuette, as anyone who saw 1993’s Amos & Andrew, or 1994’s Guarding Tess and Trapped In Paradise can attest. More to the point, his initial stint as an action hero remains one of the most grandly entertaining phases of any Hollywood actor’s career. He’d just won an Oscar, after all, so they were all A-list projects, and watching him enliven an otherwise monotonous summer blockbuster like 1997’s Con Air with his human pyrotechnics (“Put. The bunny. Back. In the box.”) temporarily made it seem as if the bean counters weren’t entirely in charge after all. That era also provided the giddy pleasure of watching Cage dial it back (after the first reel or so) in John Woo’s Face/Off (1997) while John Travolta, of all people, turned in a superb Nicolas Cage impression. There were some duds, as always (City Of Angels, 8mm), but no indication that a great actor was now in decline.

What’s fueled that impression in recent years is the combination of A) Cage’s financial desperation (due to IRS hassles), which has forced him to accept whichever roles pay the most, and B) Internet memes. The former is pretty self-explanatory, and it’s often apparent how frustrated Cage is with the material he’s been given; only someone who’s never spoken on a telephone could possibly claim that he phoned in his performances in Ghost Rider: Spirit Of Vengeance or Trespass. (Drive Angry is probably as close as he’s yet come.) Still, had this creative drought happened 20 years ago, it would have been politely ignored, just as De Niro’s generally has been. The Internet allows fans to cherry-pick all the weird/striking/indelible moments from Cage’s filmography and fashion supercuts of context-free eccentricity. The Wicker Man provides the most notorious examples, though both the film itself and Cage’s performance in it have been unfairly maligned. It’s not a good film, by any means, but it’s more self-aware than people give it credit for, and so is Cage. Doesn’t matter. The perception of Cage as an unmodulated goofball has taken firm hold, and everyone now expects him to go apeshit in every film, simply because “that’s his shtick.” 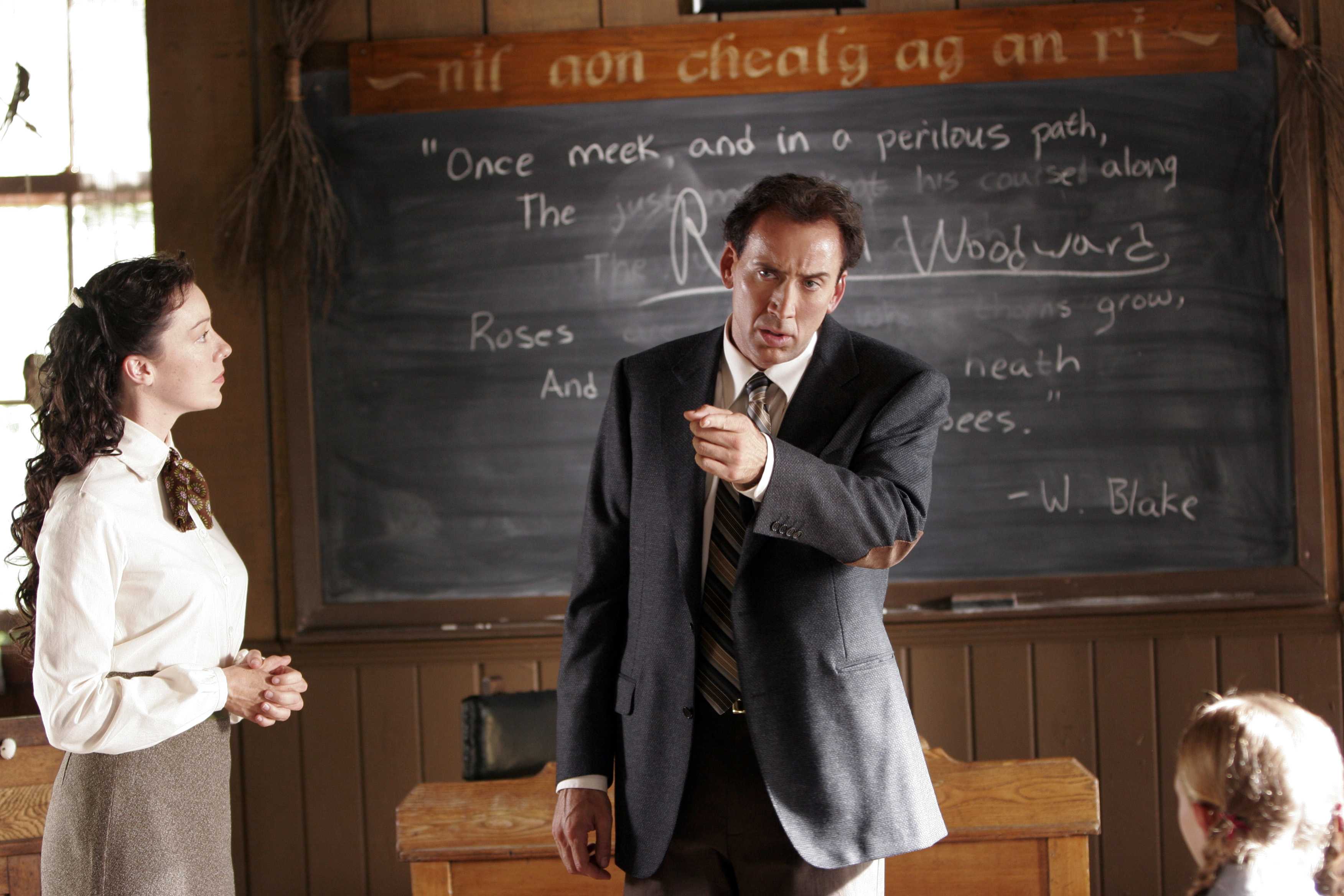 That’s why Joe has come along at exactly the right time. (Or, perhaps more accurately, Cage convinced his accountant to let him take a low-paying gig at exactly the right time.) Its reputation as a “normal” Nicolas Cage movie has been somewhat exaggerated. This is a film in which Joe stops by a friend’s house and winds up helping to dress a deer hanging from the ceiling without even bothering to remove the cigarette from his mouth. Thing is, though, Joe is an actual character, and Cage hasn’t had one of those to play in quite a while. That he can inhabit an ordinary working man with precision and conviction should come as no surprise, but that degree of sturdy professionalism contradicts the “not the bees!” image, so it’s been treated as a revelation. Cage the actor is back! Truth is, he never went anywhere. He’s just been toiling in movies so blatantly awful that not even expressionism can save them, because the primary substance he chose to abuse was money. His recovery is ongoing (next up: Left Behind), but with luck, this time in talent-stifling purgatory won’t last forever.