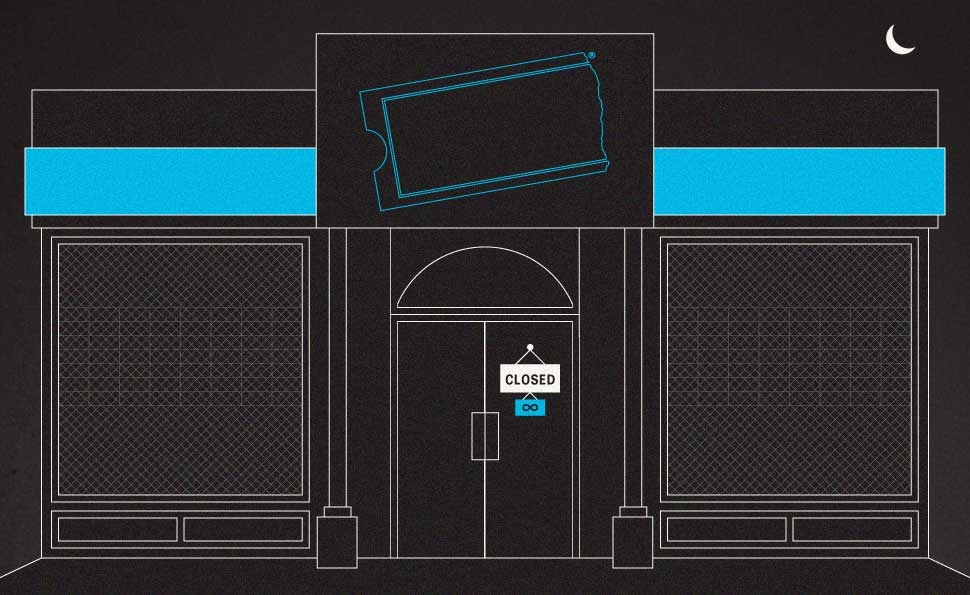 Let’s get this out of the way first: I love Blockbuster, and find it deeply sad that it’s closing all its remaining stores and shuttering its non-starting mail-subscription service. The widely disparaged, even reviled video-store chain occupies a special place in my heart. This is less controversial a statement than it would have been 20 years ago, when the chain was on every cinephile’s shit list for a variety of transgressions, ranging from not carrying The Last Temptation Of Christ to running independent mom-and-pop video stores out of business to refusing to carry NC-17 films, no matter how artistic and sublimely tasteful their nudity might be. For years, working for Blockbuster Video—as I did from ages 16 to 19—was like toiling on the Death Star: I didn’t necessarily agree with its overall principles, but hey, it was a job. And as a movie-mad 16-year-old, I could not imagine a better gig.

My estimable editor and friend Scott Tobias was so disgusted by Blockbuster’s refusal to carry The Last Temptation Of Christ that as a college freshman in 1991, he wrote them an angry letter, cut up his membership card, and mailed it to them in protest. I understand his frustration and his reservations. Hell, I shared them. As a movie lover, it was damn near impossible to love Blockbuster without also hating it just a little. Blockbuster gave movie lovers ample reason to hate it, beginning with its name. “Blockbuster” as a word loudly broadcast that the chain was all about popularity and pandering to the masses, not appealing to viewers with discerning tastes. It was a brightly lit franchise where a family could rent one of 75 copies of the new Mel Gibson or Tom Cruise movie, not a destination for bohemians to track down the latest from Atom Egoyan or Frederick Wiseman. Yet plenty of movie lovers received a formative cinema education at Blockbuster Video all the same, myself included.

As chronicled in the wonderful recent documentary Rewind This, the rise of VHS tapes and video-store culture had a democratizing effect on film fandom. It helped eliminate the divide between high and low culture, art and trash. Suddenly you didn’t need to be Peter Bogdanovich and haunt retrospectives in order to see a broad cross-section of work from across the spectrum of classic American, foreign, and independent film. You just needed membership to a video store. That was incredibly empowering. Access to cinema’s past expanded exponentially, giving rise to filmmakers like Quentin Tarantino. And while the video-store revolution happened in all kinds of cool, borderline legendary video stores like Kim’s Video and Video Archives (where Tarantino and Roger Avary famously worked), it happened primarily at Blockbuster Video, the biggest and most powerful force in home video.

“For better or worse, Blockbuster is a big part of our collective cinematic past. And it is invariably sad when part of our past dies.”

Here’s the thing: Blockbuster was never a great video store. It wasn’t even a particularly good video store. It was not designed to educate customers, or turn them on to exciting movements in other countries. On the contrary, Blockbuster seemed to go out of its way to pretend that other countries didn’t exist. However, at the Blockbuster Video where I worked, the foreign section was paltry and infrequently visited, but it was there. It didn’t have Jean-Luc Godard’s latest provocation, but it probably had Breathless and Contempt, and for a sullen teenager desperate to get some culture, that was enough. It had to be, because there weren’t many alternatives.

It was possible to get a good film education out of Blockbuster, but those who wanted to had to know how to work the system. It required effort, creative thinking, and planning. Heaven knows Blockbuster didn’t make it easy. It shoved the popular shit down customers’ throats with unrelenting ferocity. So budding cinephiles essentially had to work around Blockbuster’s corporate culture to find the weird little niches and funky subsections where art,  entertainment, and individuality grew like a fungus. I learned to look past “Action,” with its interchangeable selection of Steven Seagal and Chuck Norris vehicles, to “Wild Action” (i.e. violence with boobs) and “Super Action.” The difference between Action and Super Action was the difference between Richard Roundtree and Rudy Ray Moore, between the expected hero and the lunatic whose stardom is so incongruous and surreal that it feels like a brilliant cosmic joke.

Discoveries like Rudy Ray Moore meant more because I had to work for them. Having access to a limited number of art and foreign films, as Blockbuster customers and employees invariably did, taught me to value them more highly. Blockbuster wasn’t designed to turn people on to Rudy Ray Moore, but it happened all the same, simply because Blockbuster rented movies, and movies come in all shapes and sizes, and very few of them happen to be genuine blockbusters.

That’s what I loved about working at Blockbuster. Within an inhuman corporate structure, the place was bursting with weird humanity. As my colleague Matt Singer eloquently argued yesterday, the video store is valuable, even essential, less as a place to procure motion pictures than as a gathering place for people who love movies. Or like movies. Or are ambivalent about movies, but come to a tawdry cathedral of film all the same.

To paraphrase Dan Aykroyd in Dragnet, the average Blockbuster Video represented not just a business, but a sprawl of “constantly interfacing humanity.” Sometimes that constantly interfacing humanity took the form of endless lines of pissed-off customers angrily demanding the latest, most sought-after title. Sometimes it represented a customer asking for a film, even though he wasn’t entirely sure whether it existed or he half-remembered it from a dream. But that human element existed all the same. It was what I treasured, and will miss most of all in the passing of Blockbuster—and, by extension, the eventual passing of all brick-and-mortar video stores.

My life began at Blockbuster. The pay was shit. I made minimum wage when I was hired ($4.25 an hour), but when I put on the khaki pants and blue Oxford shirt, something remarkable happened: Seemingly sane adults began treating me, a 16-year-old, like someone whose cinematic opinions they valued. By virtue of wearing a uniform and having a name tag, I suddenly became an expert on movies. I didn’t want that feeling to end even after I reluctantly left Blockbuster as a college sophomore because the commute was too long. It isn’t much of an exaggeration to say a direct line could be drawn between the four years I spent working in a video store (three at Blockbuster, and one at Madison’s Four Star Video Heaven) and the 16 subsequent years I’ve spent as a film critic. There’s a critic inside every great video-store clerk. Sometimes they’re even afforded an opportunity to escape.

As corporations struggle and fail, the seemingly impregnable armor of power and money they sported at their height begins to crumble, and they begin to seem more human. That’s how it was with Blockbuster. Once Netflix began to revolutionize home viewing by radically expanding access while simultaneously eliminating the community-building potential of the video store, Blockbuster began to seem less like a vaguely evil monolith, and more like an aggregation of desperate people struggling like hell to hold on in a terrifying environment. The ominous connotations the franchise once had were replaced by the sympathy we habitually extend to people and institutions on the ropes. Blockbuster stopped being the bully mowing down independent neighborhood Davids, and became an unlikely underdog in its battle with Netflix. Time and failure rendered Blockbuster first vulnerable, then weirdly sympathetic.

And now Blockbuster as a physical destination is no more. The one-time Goliath and scourge of cinephiles has been vanquished. The mom-and-pop video stores didn’t rise up to conclusively defeat their shared foe; in the way of evolution, this behemoth was ultimately defeated by a sleeker, more adaptive behemoth, namely Netflix. It’s an occasion for sadness and reflection, not triumph. A cultural evil has not been eliminated, so much as a lot of people with families, mortgages, and bills are now out of work. It isn’t as if they can easily find employment in other video stores.

Blockbuster was a tremendously flawed institution—it still feels weird to write about it in the past tense—but its legacy is substantial. For all its faults, of which there are many, Blockbuster was for decades a place where people gathered to get movies, argue about movies, and generally inhabit a world that was all about movies. That alone makes Blockbuster worth mourning.