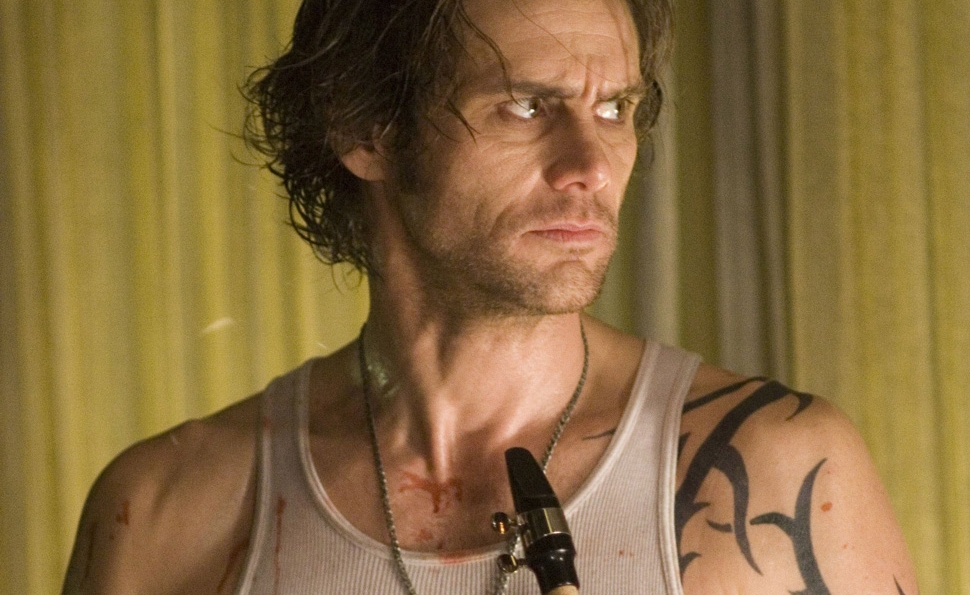 How Jim Carrey’s belief system explains his choices, in movies and in life

On June 22, 2012, Jim Carrey participated in the Nantucket Film Festival’s “All Star Comedy Roundtable,” with fellow guests Ben Stiller and Chris Rock, and moderator Bill Hader. (It’s available on Netflix). At one point, the conversation turned to the topic of Saturday Night Live, where Stiller and Rock had worked, Hader was currently employed, and Carrey recently appeared as a guest host. This was what the Kick-Ass 2 star had to say about the experience:

I said to Lorne, I swear to God, after the table read, I said ‘“You realize that every sketch I’m either heaving someone over my head, I’ve got a human being hanging from my back, I’m being thrown through a window. Do you realize that I’m in my late 40s? Do they understand that?” And he said, “No, they remember you like they want to remember you. And that’s what they want you to do.”

Carrey isn’t in his late 40s; he’s 51, and a grandfather—Jackson, son of Carrey’s daughter Jane, was born in February 2010. Yet grown-up roles remain rare for Carrey, and not just on that particular episode of Saturday Night Live. For a while in the late ’90s and early 2000s, Carrey experimented with more mature films, temporarily abandoning his signature spastic physical comedy for serious fare like The Majestic and Eternal Sunshine Of The Spotless Mind. He won two Golden Globes (for The Truman Show and Man On The Moon) but received zero Academy Award nominations. With the exception of The Truman Show, none of his dramas were major financial hits. 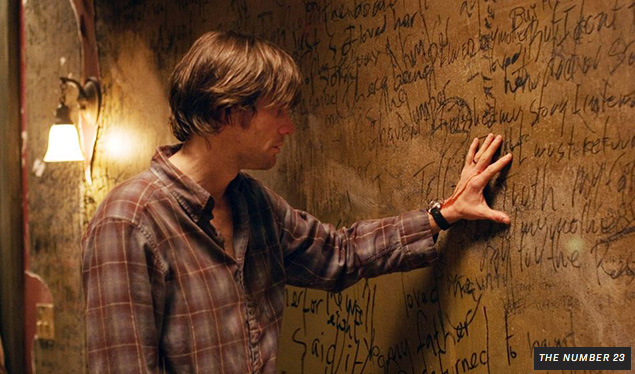 The breaking point for this more experimental phase of Carrey’s career came with his portrayal of a literal psychotic break in the hilariously tawdry paranoid thriller The Number 23. Carrey stars as lowly dogcatcher Walter Sparrow, whose life is thrown into turmoil by his discovery of a novel titled The Number 23, which follows a detective named Fingerling whose history meshes eerily with Walter’s. Soon, Walter also shares Fingerling’s obsession: a particular branch of numerology that states that everything in life is dictated, controlled, and explained by the number 23. In scenes from the novel, Carrey plays Fingerling, saxophone at his side, tattoos down his arms and back, having kinky sex with Virginia Madsen and madly scribbling numbers on his arms. In spite of constant support from his loving wife and son, Walter goes completely insane. Over a number! It’s easily the funniest movie Carrey has made in the last 15 years; the only problem is, it isn’t a comedy.

The Number 23 was the nadir of Carrey’s career. The film scored an 8 percent on Rotten Tomatoes, grossed just $35.2 million in the United States, and inspired him to fire his agent. That would be a tough pill for any actor to swallow, but it was a particularly hard one for Carrey, a man who lives his life according to the law of attraction, a belief system that argues that “‘like attracts like,” and that by focusing on positive or negative thoughts, one can bring about positive or negative results.

Over the years, Carrey has talked publicly about his belief in the law of attraction on numerous occasions:

“I believe in manifestation,” Carrey says at one point in that clip. “I believe in putting a rocket of desire out into the universe. And you get it when you believe it.” By that theory, then, The Number 23’s failure was almost a self-fulfilling prophecy, and maybe even Carrey’s own fault.

The film was loaded with murder, suicide, and sadomasochistic sex. Carrey’s character manifests all these horrific life events simply by believing that a numerical concept is out to get him; once he buys into the 23 enigma, it becomes real, actively ruining his life and harming his relationships. No wonder The Number 23 was a box-office and critical flop; the movie put negative energy out into the world, and attracted negative energy right back. Afterward, Carrey’s choice of projects took a notable turn back into mainstream comedy, and characters (like Carrey himself, post-Number 23) who fall off the successful path and learn to become better human beings through an overt positive change in their emotional and mental state.

The clearest and most overt example of Carrey’s recent trend toward onscreen positivity is 2008’s Yes Man, which is essentially a reversal of Carrey’s enormously successful 1997 film Liar Liar, in which he played a compulsive liar compelled by his son’s birthday wish to always tell the truth. In this spiritual sequel, Carrey plays Carl Allen, a miserable bank employee who spends his days rejecting customers’ loan applications and his nights sulking over his broken marriage. His crummy life is completely transformed by a chance meeting with a former co-worker (John Michael Higgins), who convinces him to attend a self-help seminar led by a New Age guru (Terence Stamp) who preaches “the power of yes.” Carl makes a vow to answer yes to every single question and opportunity put in his path, which begins paying karmic dividends almost immediately. On his way out of the seminar, he agrees to give a lift (and all the money in his wallet) to a homeless man. Right after Carl drops him off, his car runs out of gas, so he walks to the nearest gas station, where he randomly meets an adorably quirky woman (Zooey Deschanel) who offers him a ride back to his car and later becomes his girlfriend.

In a matter of weeks, Carl is a new man. Simply by opening himself up to new experiences, and putting out nothing but positive energy, he finds love, wealth, and happiness. Carl’s path echoes Carrey’s origin story; as described to Oprah Winfrey in the clip above, he believed so strongly that he would become a major movie star, he wrote himself a check for $10,000,000 and kept it in his wallet until he actually received a legitimate $10,000,000 check for Dumb And Dumber. On Yes Man, Carrey didn’t receive a salary; instead, he took a 36.2 percent cut of the back-end gross after the film’s budget was recouped. (According to Box Office Mojo, the film cost $70 million to make and earned $223 million worldwide.)

That sort of creative accounting would surely make Carrey’s next transformed positive thinker proud: Ebenezer Scrooge in Robert Zemeckis’ 2009 motion-capture adaptation of A Christmas Carol. In this fairly faithful interpretation of Charles Dickens’ novel, grumpy old Scrooge (like Carl, a penny-pinching loan officer) is awakened to the power of positive thinking by the timely intervention of three Christmas ghosts. In the story’s famous finale, a reformed Scrooge amends his miserly ways, and learns the value of friendship and charity. Once again, Carrey’s character’s quality of life improves almost instantaneously; Scrooge needs only to believe that life is good, and to act accordingly, to substantiate that belief in reality. The idea that we attract our own positive karma is reinforced by A Christmas Carol’s decision to also cast Carrey as all three Christmas ghosts, implying that different aspects of Scrooge’s own psyche create these fundamental changes within him.

After I Love You Phillip Morris (another film about a man in desperate need of a life change), Carrey returned to family-friendly fare with Mr. Popper’s Penguins, based on the famous 1938 children’s book of the same name by Richard and Florence Atwater. Carrey plays Tom Popper, a work-obsessed real-estate mogul separated from his wife (Carla Gugino) and kids. One day, Popper receives word that his father has died and sent him a farewell gift: a penguin. Later, another package arrives with five more birds. The work-obsessed Popper is deeply resentful of this “gift,” and works to rid himself of the animals. But his children love them, and eventually Popper starts to as well. The penguins teach him to be a happier person, and in impressively short order, they fix his marriage and help him secure the real-estate deal of the century. They seem like an example of a negative person attracting a negative situation, but once Popper sees them as a blessing instead of a curse, they actually become one.

In a recent Grantland piece about Carrey’s career arc, Steven Hyden calls this laws-of-attraction era “a lesson in how movies you don’t think could possibly be successful can quietly make money,” noting that Yes Man, Mr. Popper’s Penguins, and A Christmas Carol all grossed hundreds of millions of dollars. “Jim Carrey’s name above the title might be money in the bank,” he adds. “But it’s strictly in the form of low-risk mutual funds.”

After a very funny supporting role in The Incredible Burt Wonderstone, Carrey finally made the cinematic equivalent of a microcap stock: Kick-Ass 2, where he plays a superhero named Colonel Stars And Stripes. By the time Kick-Ass (Aaron Taylor-Johnson) meets the Colonel, the latter has already completed his belief-based transformation, but the journey he describes from villain to hero places him firmly in the same category of mid-life redemption-seekers as Carl, Popper, and Scrooge. A former mob enforcer, Colonel Stars And Stripes eventually found God, became a born-again Christian, and started fighting crime instead of committing it. 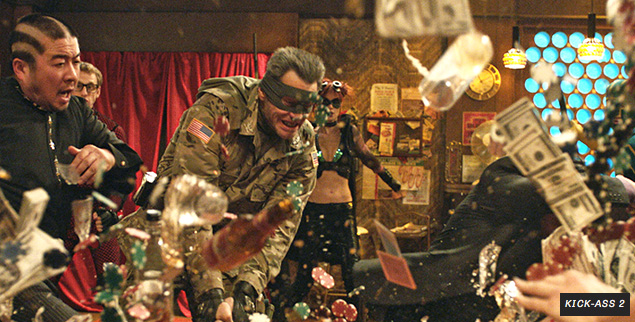 Carrey’s dialogue hints at the character’s dark past, but brutal interrogation techniques aside, the man seen in Kick-Ass 2 is surprisingly decent. While he carries a gun into battle and occasionally threatens bad guys with it, he goes out of his way to show Kick-Ass that the gun isn’t even loaded. The Colonel would never actually shoot someone.

In spite of the character’s anti-gun stance, Carrey announced in June that he couldn’t “in good conscience” support the film and its “level of violence” after the school shooting in Newtown, Connecticut. It was an unusual choice for a movie star with a financial stake in his movies’ success, but a perfectly sensible one for someone who believes in the law of attractions. Even with his self-actualized about-face, Colonel Stars And Stripes remains trapped in a world of violence and sin like Walter Sparrow in The Number 23. That’s why Carrey had to distance himself from it—to keep that negativity away from him. It was probably the best for the film anyway. If Carrey can manifest his desires with belief, promoting a film he didn’t believe in would have been an enormous waste of time.