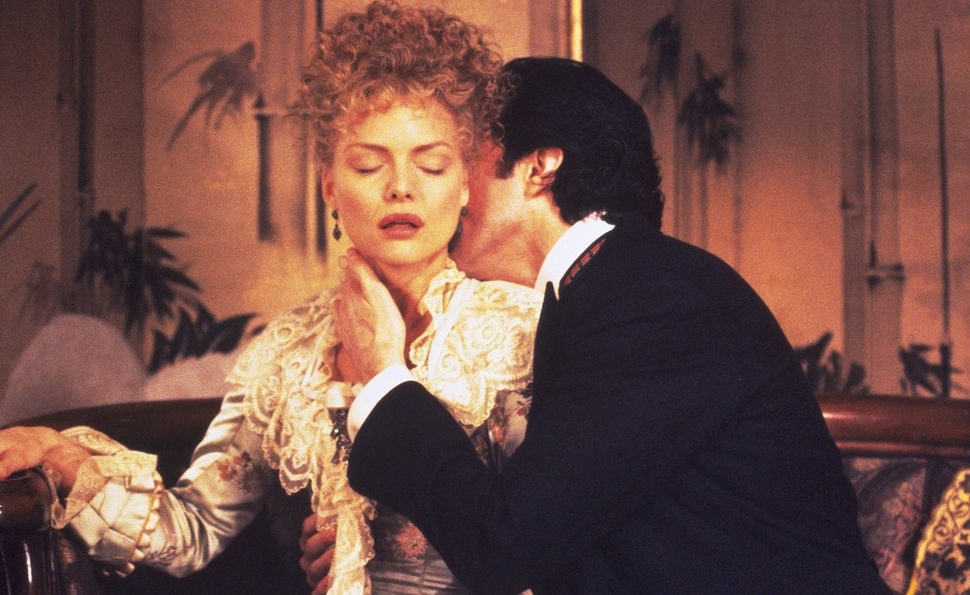 The Age Of Innocence is unmistakably Scorsese, with gossip instead of guns

It’s hard to watch Martin Scorsese’s The Age Of Innocence without hearing the turning pages of Edith Wharton’s stinging 1920 portrait of New York high society, given how closely Scorsese and his co-screenwriter, Jay Cocks, adhered to the original text. In fact, vast swaths of Wharton’s prose surface in Joanne Woodward’s subtly acerbic narration, which introduces modern audiences to the curious rituals and scandals of the 1870s elite. Yet fidelity doesn’t mean submission: The Age Of Innocence is unmistakably a Martin Scorsese picture, not only in the sumptuous sweep of Michael Ballhaus’ camera, but also in the themes of guilt and repression, and in a tribalism that’s just as ferocious as the mob, and just as inclined to protect itself from obsolescence. The only difference is that lives are snuffed by gossip instead of guns.

In 1993, such period romances were firmly the province of producer Ismail Merchant, director James Ivory, and screenwriter Ruth Prawer Jhabvala, who were hitting the peak years of Howards End and Remains Of The Day. Arthouses were saturated with other, similarly well-behaved costume pieces like Enchanted April and Shadowlands. Scorsese entered the decade as far from that world as possible: 1990’s Goodfellas is a brilliant epic about a mid-level gangster turned informant/schnook, and 1991’s Cape Fear remake modernizes a fine 1962 thriller by turning the earlier film’s perfect family unit into a fractious one that’s vulnerable to a predator. Sandwiched between those two movies and 1995’s Casino—another gangster tale—The Age Of Innocence looked all the more conspicuous in its formal language and pristine, suffocating period finery. At the very least, it seemed like a conflict of sensibilities: Literary adaptations have a way of enforcing respect and timidity from even the most spirited directors, and Scorsese’s caffeinated style set him apart from the 19th-century milieu.

The Age of Innocence opens at the opera, where emotions are expressed explicitly onstage while gossips scan the boxes for signs of the sublimated kind. The scandal du jour is the return of Countess Olenska (Michelle Pfeiffer)—also known, more plainly, as Ellen—who has fled a bad marriage in Europe and is attempting to rebuild her life in New York. Newland (Daniel Day-Lewis) is engaged to Ellen’s cousin, girlish socialite May Welland (Winona Ryder), and counsels Ellen in his official capacity as a lawyer, but the attraction between them is immediate. Newland admires Ellen’s intelligence, wit, and lack of propriety, qualities that deepen the schism between her and a social circle that demands her contrition and shame.

There’s a window of opportunity for Newland to pursue his affections for Ellen, but The Age Of Innocence’s central irony is that he’s the one who’s most responsible for closing it. As Woodward’s narration makes clear, maybe too clear, early on, “[Newland] questioned conformity in private, but in public, he upheld family and tradition.” Newland advises Ellen against pursuing a divorce from the Count—there’s an ocean between them, after all, and divorces are especially frowned upon when instigated by a woman—and while he could tell himself he’s protecting her interests, he’s denying her the freedom she wants, and shielding her from consequences she’s strong enough to withstand. He doesn’t want to hurt May, either, but there are indications that his bride-to-be, a placid, porcelain-pretty avatar of goodness, is quietly operating to hold him in line. In this beautiful exchange, Ellen reveals more insight into how Newland actually feels than he seems capable of realizing himself:

As with any Scorsese film, passion runs hot in The Age Of Innocence, all the more so for being rigorously tamped down by New York high society. A couple of stolen kisses are like water drops slaking a desert thirst: A scene where Newland unbuttons Ellen’s silk glove in the back of a carriage has an erotic charge that’s almost comically absent of explicitness. Unrequited desires and short, dramatic bursts of catharsis are common in Scorsese’s films—he is Catholic, after all—but there’s a darker side to it, too, a raw jealousy that clouds Newland’s conscience in much the same way it does with De Niro’s characters in Taxi Driver, Raging Bull, and New York, New York. Ellen’s casual dalliances with the slickly charming Julius Beaufort (Stuart Wilson) torment Newland, even though she’s exercising the libertine values that make her so attractive to him. He doesn’t act on these feelings—he isn’t the type to strike a woman over a burned steak—but the emotions left to simmer here are just as strong (and unsavory) as those in other Scorsese films. 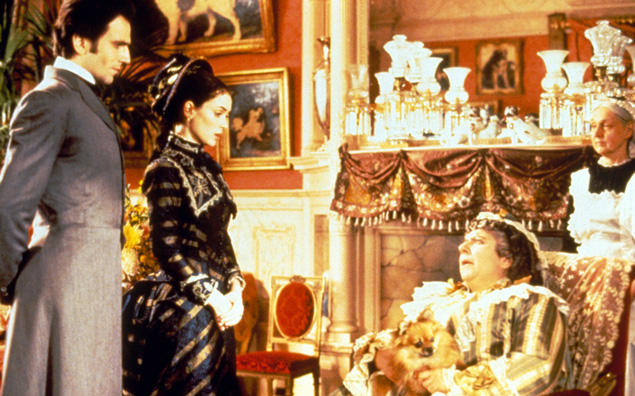 In detailing this particular gang of New Yorkers, Scorsese and his crew go beyond the decorousness of other period romances and find baleful significance in paintings, china patterns, and mantlepiece baubles. These signposts of wealth and class come to symbolize, say, the brazenness of Julius Beaufort, who hangs a nude “in plain sight” in the ballroom entryway, or the Van der Luydens’ place atop the Fifth Avenue caste system, made clear by their exquisite table-settings. It’s an orderly universe, and that order is enforced by a combination of rigid conformity and a gossip mill fueled by buzzing conspiracy. By the end, Newland learns that not even his desires are private, much less any attempts to act on them.

It’s hard to compare the New York of The Age Of Innocence to the savage criminal underworlds of Scorseseland a century later, but only because the kills here don’t stain the hardwood. But Newland is rubbed out just as surely as the pileup of gangsters in Goodfellas—to a point, he’s responsible for pulling the trigger—and for the same reason: With the world outside threatening change, the mobs in both films have to close rank to survive. Scorsese is an expert of registering the human consequences for those who disobey the rules, or in Newland’s case, have their desires extinguished. The Age Of Innocence possesses a tension between the flowering of private passion and the quiet forces that make its survival impossible—and Scorsese, a master of coiled intensity, brings it across with heartbreaking force.