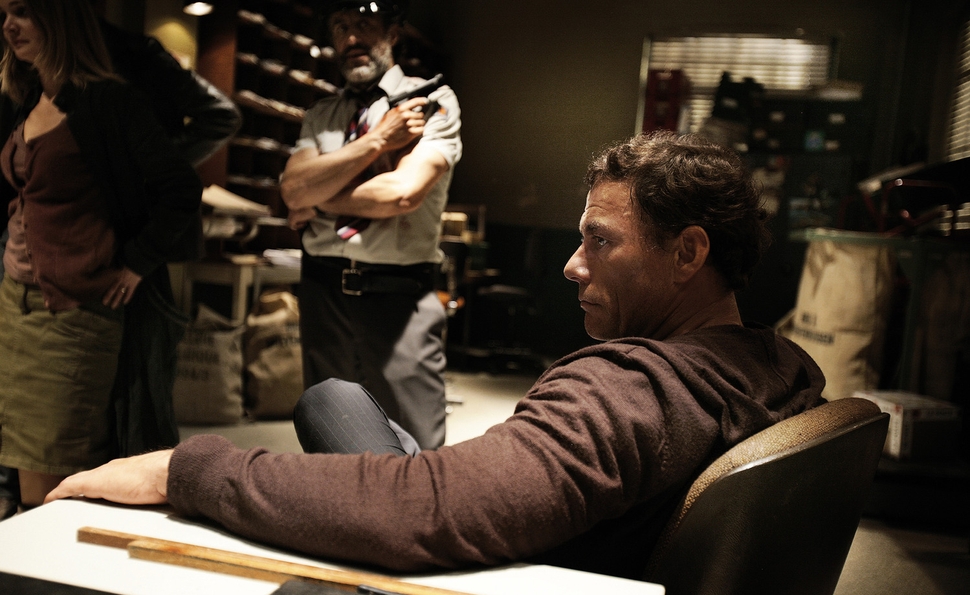 With JCVD, a fading action star stepped outside himself

In the decade leading up to 2008’s JCVD, Jean-Claude Van Damme, “The Muscles From Brussels,” the martial-arts sensation of Bloodsport and Timecop, made the following movies: Legionnaire, Inferno, The Order, Replicant, Derailed, In Hell, Wake Of Death, The Hard Corps, Second In Command, Until Death, and The Shepherd: Border Patrol. Every single one of them was released straight to DVD in the United States. At the same time, his show-business bête noire, Steven Seagal, having bottomed out at Warner Bros. after the vanity project On Deadly Ground and Fire Down Below, starred in the likes of The Patriot, Exit Wounds, Ticker, The Foreigner, Out For A Kill, Belly Of The Beast, Out Of Reach, Today You Die, Black Dawn, and Mercenary For Justice, among other titles that sound like bullet points from Troy McClure’s résumé. For action stars like Van Damme and Seagal—and Chuck Norris, Van Damme’s Cannon Group predecessor, before them—the work keeps coming even though their careers are effectively over. They just operate in the shadows, taking jobs like the cold-blooded mercenaries they played so often onscreen.

Among the wittier meta-movie touches in JCVD—which could be called Van Damme’s 8 1/2 with all apologies and a flower basket due to Fellini—Van Damme’s agent calls with the humiliating news that Van Damme lost a part to Seagal because Seagal offered to cut off his ponytail for the role. This is what counts as an event in the straight-to-DVD world: a has-been getting a haircut.

But let’s stop the comparisons to Seagal right there. Because for all the overlap of these two erstwhile action stars fighting for profile in a diminished marketplace, Van Damme has more charisma and grace, and by far the most interesting career. Though he never had a commercial hit as satisfying as Seagal’s Under Siege—his prime includes Death Warrant, Lionheart, Double Impact, and other generic actioners—Van Damme acted as the bridge between Hong Kong and Hollywood, importing top HK talents like John Woo (Hard Target) and Tsui Hark (Double Team, Knock Off), and proving their stylistic hallmarks could be applied to American action movies. He also, crucially, had a sense of humor about himself, unlike his genre counterparts, who trafficked in toughness and brute force without a whit of humanity, much less humility. In that, Van Damme occasionally resembled a Eurotrash Patrick Swayze, though his projects rarely exploited this softer, funnier, more sensitive side. He too often accommodated movies when they might have better accommodated him. 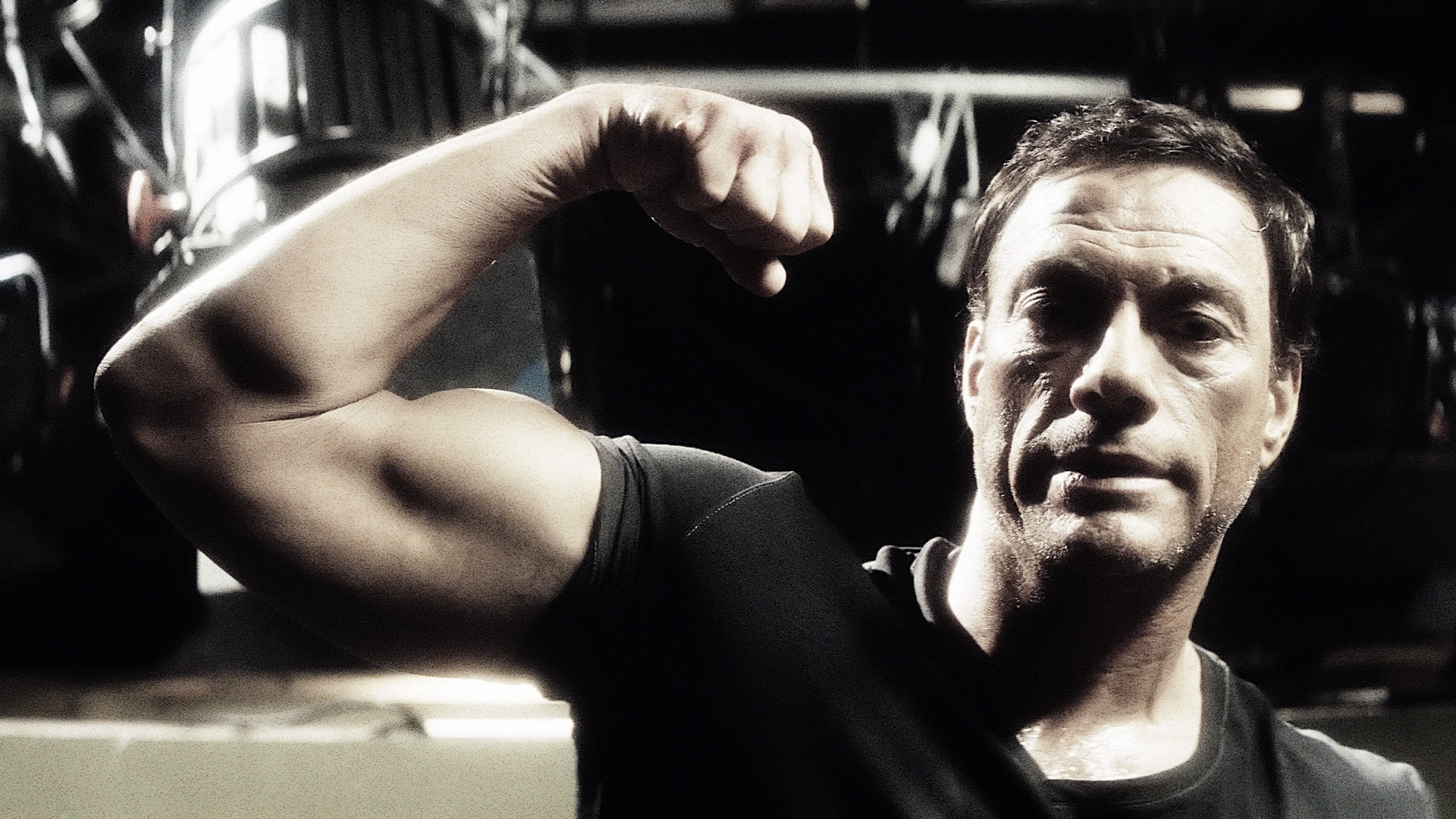 This much is clear about JCVD: No other action star of Van Damme’s generation would have made it. To quote John C. Reilly in Hard Eight, they can be masters of “jujitsu, aikido, and regular karate,” but self-deprecation isn’t a standard part of the repertoire. And perhaps it wasn’t Van Damme’s, either, until the setbacks of his own life and career forced it on him. Onscreen, Van Damme spent a decade in the wilderness, collecting paychecks for supplying generic action movies to undiscriminating couch potatoes. Offscreen, he nursed a near-legendary cocaine habit, married and divorced multiple times (his remarriage to wife no. 4 has held), was diagnosed with bipolar disorder, and was even homeless for a time. A cynic might consider the personal disclosures in JCVD to be a shrewd act of career rehabilitation, but the film caught him at a true low moment, and got into the embarrassing particulars.

French-Tunisian director Mabrouk El Mechri, working from a script he wrote with Frédéric Benudis and Christophe Turpin, pours these biographical details into a scenario that’s half hostage thriller, half Irma Vep-style meta-movie. And though the latter part is more compelling than the former, JCVD never forgets that Van Damme’s image is the focal point. El Mechri opens with the best shot of Van Damme’s career (and really, a legitimate candidate for any list of all-time great opening shots), a single take of the 47-year-old kicking, punching, shooting, and stabbing his way through a gauntlet of attackers, who come after him with guns, knives, grenades, even a flamethrower. The shot is ruined when the cheap set collapses at the end, but the young Chinese director has no sympathy for his exhausted middle-aged star: “Just because he brought John Woo to Hollywood doesn’t mean he can rub my dick with sandpaper.”

Welcome to the humiliating life of Jean-Claude Van Damme, a former star left with all the hassles of celebrity, but none of the benefits. In fact, the events in JCVD would never have happened if he weren’t so desperate and pathetic. Back in his Brussels hometown, where he’s still revered, Van Damme the movie character—whom I’ll henceforth call JCVD to avoid confusion—scrambles to cover a bounced check to the lawyers working on his hopeless child-custody case. (At trial, the counsel for his ex-wife goes through a stack of DVDs to show how JCVD’s violent movies make him unfit to be a father.) After pausing briefly to snap a photo with two superfans—“I pictured him taller. But he’s short,” they complain afterward—JCVD heads into the post office to collect a wired advance to cover the shortfall. He unwittingly enters the scene of a robbery-in-progress, and the three perpetrators decide that instead of sticking him with the other hostages, they’ll make it look like JCVD is the mastermind responsible. It’s a plausible scenario: After all, he’s a washed-up actor in need of some quick cash.

El Mechri seems to know that the heist material won’t sustain JCVD on its own, so he keeps looping back in time and showing the same scenes from different angles. And whenever he gets away from the post office, the film has space to reflect on the sad circus of Van Damme’s personal and professional life, and on the pride-swallowing reality of clinging to show business’ bottom rung. JCVD wonders if he can get any part in a studio picture, even working for scale. His agent demurs, and offers to send him a script for some piece of crap he’s forgotten they already made. Then there’s Seagal and his stupid ponytail. And the civilians and taxi driver who expect Brussels’ famous son to stand for photos, or engage them in conversation. Once upon a time, when JCVD was a millionaire and one of the hottest action stars in the world, the tradeoff of privacy for celebrity might have been worth it. Now it’s all hassle.

The twists and turns inside the post office aren’t as revealing, but El Mechri and his co-writers make one crucial, brilliant decision: The JCVD in the hostage situation is the real Van Damme, not the guy whom audiences expect to disarm the perpetrators with a few swift roundhouse kicks. When JCVD has a gun to his head, he doesn’t step back with an elbow to the gut, or snap the shooting arm in two places; he stands still and does what he’s told. Though there does come a point where he has to take action, El Mechri stages it first as a fantasy of a graceful kick in front of cheering spectators, before doing it again as an uglier struggle for separation.

But the real coup de grace in JCVD is a six-minute, heavily improvised monologue in which the star, literally elevated from a scene in progress, reflects on the ups and downs that brought him to this perilous place in his life. He talks about his ambivalence over having his dreams of stardom realized. He cops to his drug use, womanizing, and excesses. He frets about the cosmic justice of wanting to come home to Brussels, only to be thrown into this terrible situation. He cries. He gives the closest thing Jean-Claude Van Damme has to a real performance, and it’s mesmerizingly staged and acted.

JCVD promised the rebirth of Van Damme as an actor, a more human action star. Then, four years later, he turned up in The Expendables 2 like everyone else.