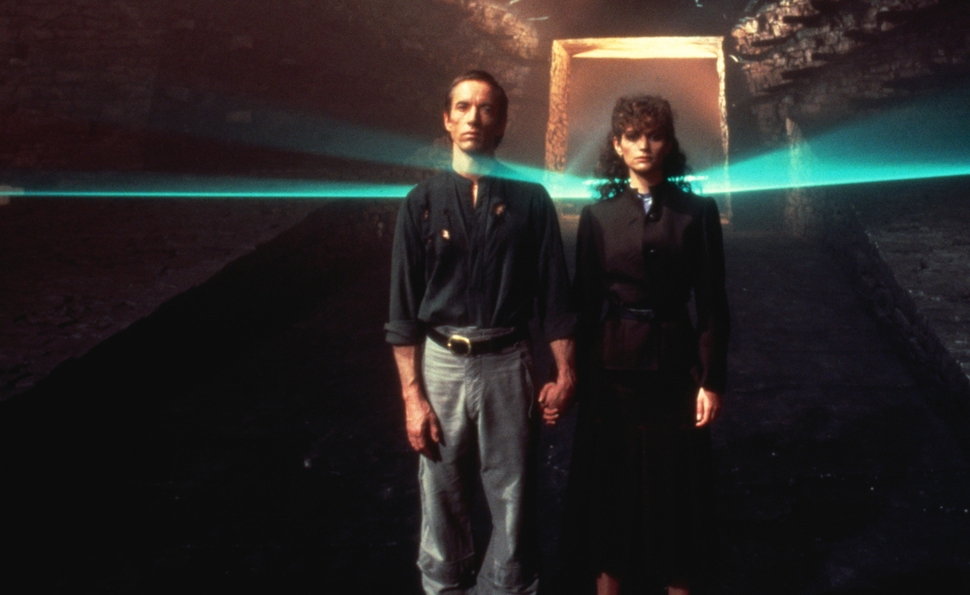 “Go to sleep. And dream.” —Scott Glenn, The Keep

Director Michael Mann has occasionally worked in television—most notably on the 1980s cop shows Crime Story and Miami Vice, which did their part to bring the medium closer to cinema—but he’s only made 10 features since his brilliant 1981 debut, Thief. He isn’t like a Jonathan Demme or a Steven Soderbergh, peppering his filmography with documentaries and odd little side projects; each new film is an event, meticulously curated on a technical level. Yet when Mann’s career gets discussed, 1983’s The Keep rarely comes up, and certainly not in the hushed tones that greet Thief, Heat, Manhunter, Collateral, or even the maligned 2006 big-screen version of Miami Vice, which some Mann auteurists consider his best work. The Keep has never been available on DVD or Blu-ray, and the current copy streaming on Netflix is a pan-and-scan version minus the Tangerine Dream score, which obliterates the striking widescreen compositions and enveloping music—by far the film’s two strongest elements.

If The Keep is remembered at all, it’s less as a Mann film than as a weird manifestation of ’80s music-video atmosphere and hair-metal special effects, something Gen-Xers half-recalled seeing on cable back in the day. The film wasn’t cherished at the time, either: Mann’s allegorical World War II fairy tale/horror movie about Nazis, capital-E Evil, and the corruptions of power originally had such a scope that the original cut was rumored to be more than three hours long. The release version was halved to its current 96 minutes. Author F. Paul Wilson, who wrote the novel on which The Keep is based, was appalled by what Mann did to his book, calling the film “visually striking but otherwise incomprehensible.” (Though Mann made it clear in an on-set interview with Harlan Kennedy that Wilson’s book wasn’t his starting point; Mann was more interested in world-building, inspired by higher sources like One Hundred Years Of Solitude and Paradise Lost.) And critics who did acknowledge The Keep were unkind, like Vincent Canby of The New York Times, who complained that the soundtrack was “so sibilant that I longed to stuff cotton in my ears.” (Then again, to his discredit, Canby slagged Thief as “pretentious” and “achingly poetic.”)

Beyond being generally disreputable, however, The Keep is also an anomaly in Mann’s career, a swerve into fantasy after the street-smart likes of Thief, and a bold experiment he hasn’t taken up again. He’s moved fluidly through other genres—crime films (Heat, Collateral), horror (Manhunter), docudrama (The Insider), biopics (Ali, Public Enemies)—and brought the same rich atmosphere to bear on every one, but the best parts of The Keep have him reaching for the ineffable, trying to find some way to connect Evil in the abstract with Evil as it tempts and ravages in the real world. This doesn’t mean The Keep belongs in the Mann pantheon, or even that it coheres any more than Wilson, Canby, or its legion of critics claim. But it’s still a Michael Mann movie, and there’s value in that.

To the ominous sound of thunder and the slow build of Tangerine Dream’s percussion on the soundtrack, a caravan of German trucks rumble through a village in Romania’s Carpathian Alps in 1941. At one steering wheel is Captain Klaus Woermann (Jürgen Prochnow), whom Mann introduces blue eyes first. Yet this is no Nazi thug, but the most sensible character in a senseless world. As such, he’s quickly marginalized after the Germans arrive at a massive, uninhabited citadel that contains an ancient, unfathomable power. They’re warned that they aren’t to stay inside “the keep,” or disturb any of the 108 nickel-plated cross-like icons that are working to contain the supernatural force within. But Nazis being Nazis, a couple of Klaus’ men start digging around for silver, unleash the beast, and get exploded like victims in Scanners.

As a pack of vicious Einsatzkommandos are dispatched to restore order—their first instinct, naturally, is to gun down a bunch of Romanian villagers—Jewish professor Dr. Theodore Cuza (Ian McKellen) is pulled out of a concentration camp and brought to the keep to make sense of the ancient text etched into its walls. As he and his daughter Eva (Alberta Watson) settle into the place, the entity, Radu Molasar, takes physical form and cures the wheelchair-bound Dr. Cuza, who agrees to carry a talisman out of the keep that will let Molasar exert its powers beyond the walls. Arriving to stop it is mysterious stranger Glaeken Trismegestus (Scott Glenn), who pauses before his big confrontation with Molasar to bed Eva.

One of the intriguing ideas behind The Keep—and what separates it, beyond Mann’s distinctive sense of style, from horror films of that era or any other—is that  Molasar’s power isn’t cleanly identified as “good” or “evil,” at least not from the start. After all, Molasar heals a Jewish doctor marked for certain extermination, and kills a bunch of Nazis; as much as Eva warns her father that it’s a golem, it appears to him (and to the audience) that it’s a supernatural force for justice. Later, Molasar is revealed as profoundly dangerous, but even then, what’s truly dangerous and corrupting is its power—which, in Mann’s allegory, is the type of transfixing, seductive power that led to the madness and destruction of World War II.

The trouble with The Keep is that Molasar’s threat, Dr. Cuza’s transformation, and the reveal of Glaeken’s true agenda all come too abruptly, and the abridgment of the film completely devastates the narrative and the stateliness that’s associated with Mann at his best. Glaeken’s stormy affair with Eva is the fulcrum on which the film is supposed to turn, because she’s caught between her father, who loses himself to Molasar’s temptations, and this mystery man who exerts some force of his own. Instead, there’s a ethereal sex scene—“interstellar perversion,” to quote Woody Allen’s Manhattan—before Glaeken gets on to the business of blasting Molasar with red lightning beams, whereupon the movie turns into the fog-choked light show of many a cheesy fantasy-movie climax. (The more powerful the beings in conflict, the more likely they are to shoot different beams of light at each other until one wins.)

By the evidence here, the real battle between Good and Evil was waged between Mann’s dark, expansive, metaphorically rich fantasy and studio bosses who must have wanted something pulpier and scarier. Mann plainly lost the battle—Wilson’s complaint that it was “visually striking but otherwise incomprehensible” is as close as an opinion comes to a statement of fact—but The Keep is an authentic failure, not a generic one. The Tangerine Dream score may be the primary source of its cult status, but Mann’s achievement in creating his own dreamlike alternate reality alongside a historical one isn’t necessarily diminished by his failure to bring the story across. “The keep” has a presence: castle walls that stretch to infinity, an ancient Evil that forbids lodgers and requires rituals to contain it, the metaphorical heft of standing over a war of unimaginable atrocity. And thanks to Mann, The Keep has a presence, too.