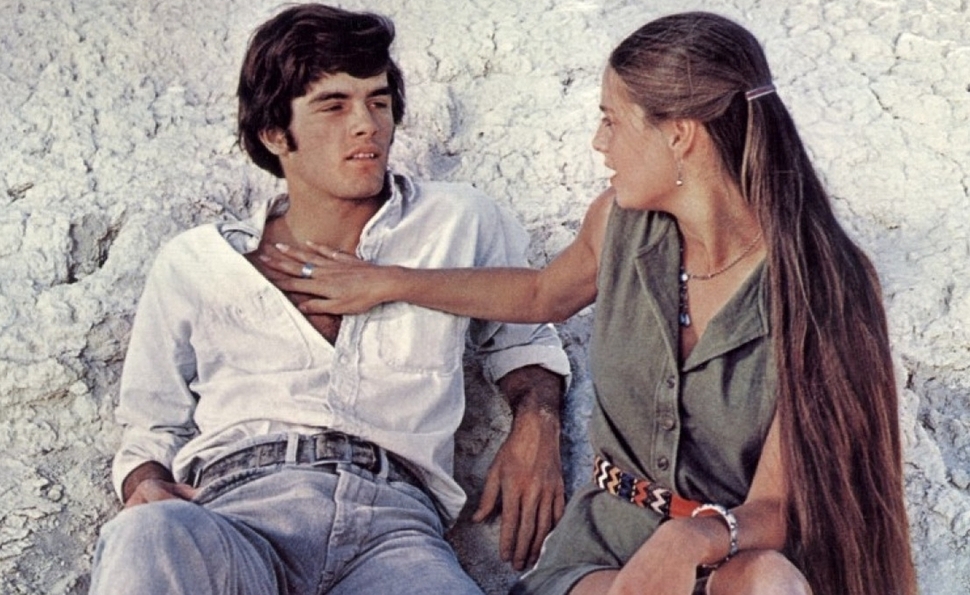 With Zabriskie Point, Antonioni offered an explosive look at America

When established auteurs from other countries try their hands at making movies in and about America, the cultural exchange is inevitably fascinating, no matter whether the film itself is ultimately accomplished, like Wim Wenders’ Paris, Texas, or a boondoggle, like Wim Wenders’ The End Of Violence. There are inevitable lapses in communication, awkward moments when a director’s foreignness comes through in malapropisms, or stilted jags in the dialogue or performances. And yet for Americans, there’s also something special about getting an outsider’s perspective on America, and being able to see the country in a new way. Natives embedded in a culture lack the ability to see what it looks like from the outside—and when outsiders do the looking, it can be illuminating, grotesquely distorted, or some combination of the two. Wherever it falls between those two poles, at least it’s different.

Consider Michelangelo Antonioni’s Zabriskie Point, as good a case study as any. 1970’s Zabriskie Point was the second of three English-language films Antonioni made for producer Carlo Ponti—the first was 1966’s Blowup, and the third was 1975’s The Passenger, starring Jack Nicholson, Maria Schneider, and one of the greatest tracking shots in cinema history. Pinning Antonioni’s usual mode of ennui and disconnection to a relatively accessible mystery about a fashion photographer possibly witnessing a murder, Blowup was a major international hit that caught Hollywood’s attention at a time when studios were eager to seize on—or even just figure out—the burgeoning counterculture. For MGM, which distributed Blowup, cutting a $7 million check to Antonioni to produce a freewheeling something-or-other like Zabriskie Point wasn’t even the craziest gamble that year, since the studio also signed off on Bud Cort flying across the Astrodome in Robert Altman’s Brewster McCloud. Nevertheless, the roll came up snake eyes.

Reception to Zabriskie Point was unkind, with blame aimed in roughly equal measure at the casting of unseasoned, dead-eyed (albeit beautiful) young leads, the tortured dialogue they were being asked to deliver, and the intellectual bankruptcy of whatever it was Antonioni was trying to say about America. Pauline Kael panned, “If it weren’t for this peculiar sense of dislocation and the embarrassment you feel for Antonioni, this would be just one more ‘irreverent’ pandering-to-youth movie, and (except visually) worse than most.” After sideswiping Antonioni’s great Red Desert as “possibly the most passive and empty serious movie of the decade,” Roger Ebert accused him of having “no feeling for young people” and not even achieving “a beach-party level of insight.” And for the trifecta, The New York Times’ Vincent Canby complained that the stars “move and talk with all the conviction of life-size mannequins.” Canby also hits Antonioni for “[doing] nothing with his physical production to illuminate in any meaningful way the emotional states of his two principal characters.” Given that Antonioni built his reputation doing that very thing, that might be the most damning criticism of all.

These days, it can be hard to find anyone who doesn’t stick up for Zabriskie Point as a misunderstood and prophetic vision of counterculture’s end, even if that means forgiving its considerable awkwardness. But then, critical opinion of Antonioni’s work has always turned on the same thin dime: Is Film X a profound reflection of spiritual and moral emptiness? Or is Film X merely empty? (It tends to come down to what I call The Pee-wee Herman Defense: “I meant to do that.”) Yet a wounded film like Zabriskie Point needn’t be an either/or proposition: The somnambulant leads are damaging to the movie, as is the stilted dialogue they’re asked to deliver, courtesy of a script credited to five writers—including Sam Shepard, Clare Peploe, and Antonioni’s frequent partner Tonino Guerra—who don’t necessarily make sense together. But it remains a fascinating, thoughtful, and often beautiful snapshot of the times, with an ending that tops even Two-Lane Blacktop for early-’70s canvas-slashing.

Antonioni started shooting in summer 1968, so by the time Zabriskie Point was released, the counterculture audience MGM was attempting to court had already moved on from that year’s fever pitch of activities. Yet the film uncannily predicts that fractiousness from the opening scene, which finds a group of college protesters bickering over a planned student strike along racial lines. The black leadership claims they’ve earned their position in blood, a white student counters that she “doesn’t have to prove [her] revolutionary credentials,” and off to the side of the argument, a guy has the temerity to ask a young woman to make coffee for him. The dim hero, Mark (Mark Frechette), declares he’s “willing to die,” but not of boredom—meetings just aren’t his trip. When he encounters these same students later, after the strike has landed them all in jail, the police toss him in a holding cell too, just because they can.

Meanwhile, in a Los Angeles office building that might as well be dubbed CapitalistLand, executives for a real-estate company mull over plans for Sunny Dunes, a development that essentially carves a wholesome, Eisenhower-era golfing resort into the desert. It’s the ultimate reactionary fantasy: a place for rich, white conservatives to rebuild after the culture has been engulfed by hippie jackals. Though Daria (Daria Halprin) has an unclear relationship with the head of the Sunny Dunes project, she opts to drive her Buick across the Mojave desert for a meeting in Phoenix. After a detour that finds her besieged by a feral pack of small-town boys, Daria cruises into the oddest of meet-cutes: Mark, who has casually stolen a single-engine plane, spots her from above, does a few fly-bys, and finally pulls off an emergency landing. Together, Daria and Mark drive off to destinations unknown, including the Death Valley panoramas of Zabriskie Point, where they philosophize and eventually screw.

Pretend your thoughts are like plants,” says Daria to Mark pre-coitus. “I always knew it would be like this,” deadpans Mark to Daria post-coitus, after their session has conjured a dust-choked fantasy orgy. “Love?” she asks. “The desert,” he replies. And with that, their minds seem as arid and windswept as Zabriskie Point itself. Though it’s hard to gauge whether Antonioni intended them to be, the emptiness of their brief encounter seems pointed. Here are two young people in no-man’s land, having fled from situations—the college-activism scene for Mark, the Sunny Dunes crowd for Daria—that have robbed them from feeling any sense of purpose. At the very least, their time in the desert is clarifying, as Mark flies back to the airstrip in a plane they’ve slathered in bright colors and anti-war slogans, and Daria makes it to her destination with explosive thoughts in mind. 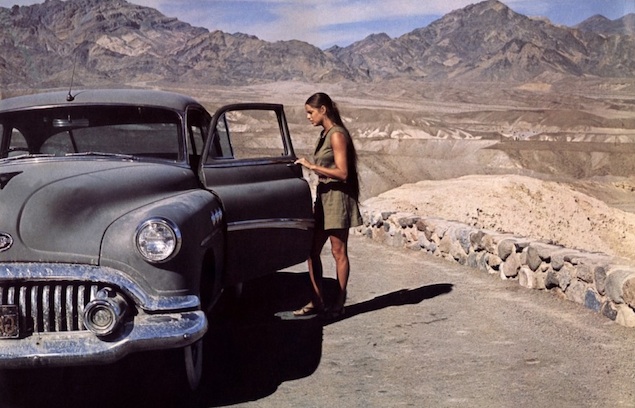 An all-consuming pessimism about America animates Zabriskie Point and gives it a subversive charge. Antonioni isn’t flattering the youthful audience he’s ostensibly trying to reach, he’s presenting a counterculture that’s rudderless and weak, crumbling to internal division and ineffectual follow-through on its revolutionary blather. Mark checks out on it in the very first scene. He’s more predictably appalled by the capitalist goons who dream up soulless enclaves like Sunny Dunes—the commercial is populated by mannequins stiffer than Mark and Daria—and festoon the landscape with billboards. (In one of the film’s blunter moments, a high-socked tourist looks upon the splendor of Zabriskie Point and tells his wife they should open up a drive-in out there and make a mint.) Like many foreign filmmakers, Antonioni gawps in amazement at America’s vast beauty, and true to form, those alien landscapes become the film’s most expressive character, as much a mirror of the soul as the small Aeolian island in L’Avventura.

Still, the end of Zabriskie Point makes the loudest statement, even though its detractors, having checked out long before, largely chose not to hear it. To original music by Pink Floyd—the soundtrack also gets contributions from Jerry Garcia and The Grateful Dead, The Rolling Stones, John Fahey, Roy Orbison, and others—Antonioni watches a mansion, carved into a rock outside Phoenix, explode from no fewer than a dozen different angles. And with it go expensive clothes, a box of Special K, and other consumer products, shot in the slowest of slow-motion, a fantasy of destruction leading to a new dawn. It’s scarcely less provocative a gesture than if Antonioni had simply taken the $7 million allotted for Zabriskie Point and burned it into ash. If this was to be his one and only American studio movie, he was determined to go out in a blaze of glory.

Next: Michael Mann’s The Keep