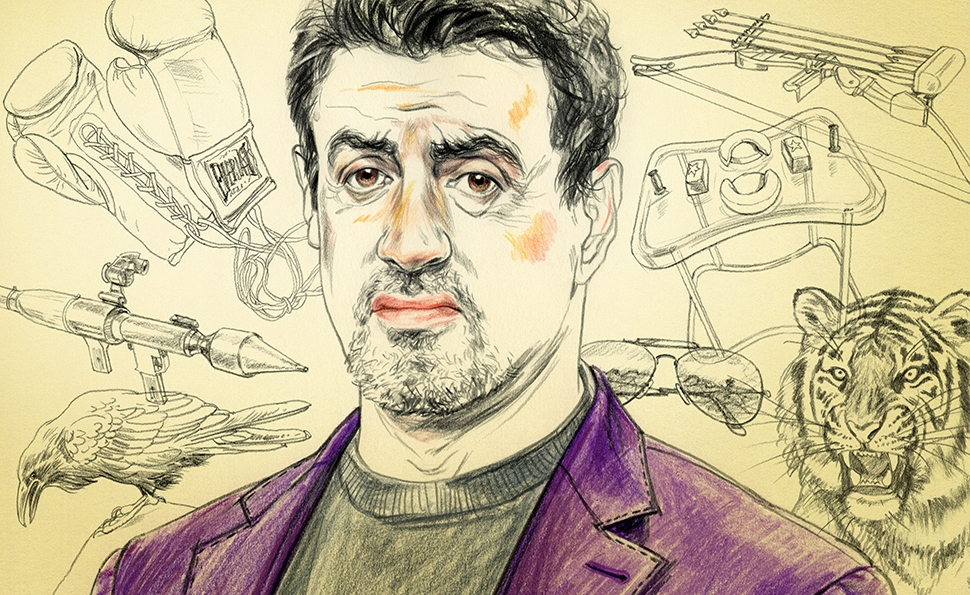 Sylvester Stallone’s career tells a story of going the distance 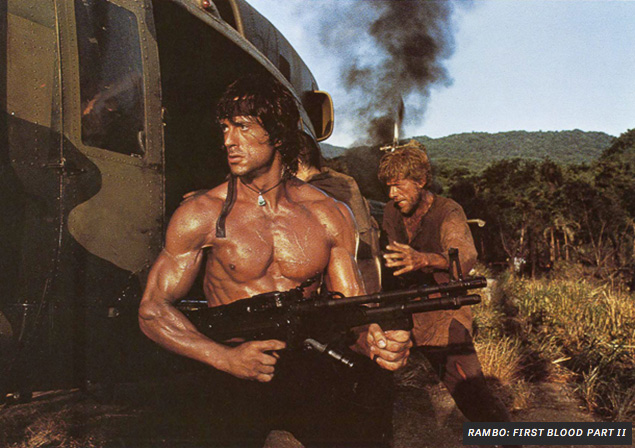 Stallone’s continuing fascination with underdogs and his continuing expansion of his musculature began to produce some truly bizarre films. The only way to maintain this he-man’s status as a scrappy David was to cast him opposite increasingly imposing Goliaths. In 1985’s Rambo: First Blood Part II, Rambo returned to Southeast Asia to rescue prisoners of war, his mental trauma conveniently healed after a few years on a chain gang. But his superiors deliberately abandon him behind enemy lines, which means he has to rescue the men and fight his way back to safety, killing hundreds of men all by himself.

Later that same year in Rocky IV, the champ’s new opponent was steroid-enhanced Russian super-boxer Ivan Drago (Dolph Lundgren), whose punches are so strong they kill Apollo Creed. Rocky swears revenge, but his climactic bout with Drago does more than avenge his friend’s death: His stirring refusal to lose actually inspires the hometown Soviet crowd to root for the American. After his victory, Rocky delivers a speech commending the Soviets for their hospitality and encouraging an end to hostilities between the U.S. and Russia; the audience (and Mikhail Gorbachev!) applaud in agreement. In other words, in the span of two films and six months, Sylvester Stallone effectively won and ended both the Vietnam and Cold Wars singlehandedly. (A few years later, he’d give Afghan freedom fighters—including, unavoidably, future Taliban members—a well-toned leg up in their fight with the Soviets in 1988’s Rambo III.)

Through the 1980s, Stallone’s characters grew less nuanced and more focused on violence and death. When they have loved ones at all, they often exist only to die and fuel Stallone’s quests for vengeance—like Apollo in Rocky IV or Rambo’s Vietnamese guide and love interest Co-Bao (Julia Nickson) in First Blood Part II, who sacrifices herself so that Rambo can make a headband out of her dress and get pumped up to kill the Vietnamese. These men are less human beings than living weapons—like Marion Cobretti from 1986’s Cobra, who’s apparently the only cop in the LAPD tough enough to take down a cult of ax murderers.

Then again, it’s difficult to blame Stallone for his narrowing focus on action; audiences loved those movies and hated the ones where he tried something different. Amid some of the most violent films of his career, he made 1987’s Over The Top, the allegedly heartwarming story of a truck driver fighting for custody of his son while competing in an arm-wrestling tournament. Stallone’s hard-driving, soft-spoken Lincoln Hawk is clearly Rocky-esque, but the awkward mix of domestic drama and sports movie clichés sank the film.

As the 1980s drew to a close, Sylvester Stallone entered his mid-40s, too old to play a world-champion boxer. So he decided to retire his signature franchise with 1990’s Rocky V, the first since the 1976 original directed by Avildsen. Almost instantly, the returning director deflated Rocky’s image of invincibility. In the aftermath of his fight with Drago, Rocky is diagnosed with brain damage, loses his fortune, and is forced to retire to his old neighborhood in Philadelphia, where he reopens Mickey’s gym and starts training young boxers like Tommy “The Machine” Gunn (Tommy Morrison).

Throughout the film, Rocky weighs the pros and cons of one last fight, spurred out of retirement by a sleazy promoter named George Washington Duke (Richard Gant), who tells Rocky he represents “the dreams of the long shots, the little people, the never-wills that identify with you” and suggests he “sell it while there’s still buyers! It ain’t gonna last forever. You say you’re a fighter? Then fight!” Duke, the villain of the film, actually seems to understand Stallone’s appeal better than Stallone himself during this period.

Rocky dispenses some inspirational slogans—“The only difference between a hero and a coward is the hero is willing to go for it”—and delivers a performance that’s truest, out of any of the sequels, to the lovable but flawed original Rocky. But even with some notable flops, Stallone himself was still riding high as one of Hollywood’s biggest stars, and the franchise always was best at its most autobiographical; Rocky V is, in some ways, its least personal entry. Its ending might have been poignant had Stallone actually retired. But quitters don’t go the distance. 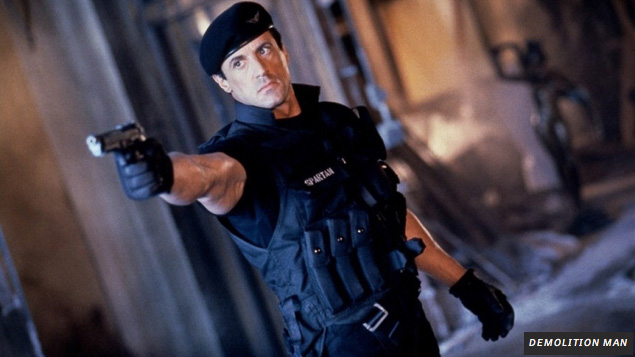 With Rocky put out to pasture, Stallone entered the 1990s looking for his next franchise. He spent much of the decade trying out different genres and sub-genres. He experimented with screwball comedy (1991’s Oscar), science fiction (1993’s Demolition Man), erotic thrillers (1994’s The Specialist), comic-book (1995’s Judge Dredd) and disaster movies (1996’s Daylight). But his biggest hit of the period was his most traditional action film, a rock-climbing adventure called Cliffhanger about another typically Stallonian loner searching for redemption after the untimely death of a friend. The plot is totally by-the-numbers, but the high-altitude cinematography is spectacular, and Stallone’s stoic physicality is a good match for the film’s frenetic villain, played by John Lithgow.

Although he’d retired Rocky (at least temporarily), Stallone pushed hard to maintain his credibility as an action hero—and a sex symbol. He started baring his butt onscreen almost as often as his chest and arms. (Curious parties can examine it in 1989’s Tango & Cash, 1992’s Stop! Or My Mom Will Shoot, and particularly The Specialist, which features a long sex scene with co-star Sharon Stone.) Pushing 50, Stallone was still reluctant to ease himself into more mature roles.

It would be inaccurate to say Sly was mellowing during the early and mid-1990s, but his action movies definitely got less graphic, and began commenting on their own relatively low body counts. 1993’s Demolition Man is about a brutal, Cobra-esque cop from the 1990s who’s cryogenically frozen and thawed out in a sanitized future, where his penchant for mayhem is the only thing that can stop the evil Simon Phoenix (Wesley Snipes). In The Specialist, Stallone plays a bomb expert who quits the CIA after he inadvertently kills an innocent girl, in order to become a mercenary hitman who makes bombs that leave no collateral damage. In 1995’s Assassins, Stallone’s a principled sniper who wants to get out of the contract-killer business.

These movies are still consistently (and sometimes brutally) violent, but they exhibit more effort to contextualize or mitigate that violence, or to argue on a thematic level for its necessity. Stallone is a heroic killer who does the dirty jobs needed to maintain an orderly society. Maybe that’s how he saw himself as he made one bad movie after another: a martyr on the altar of crappy action films, sating our collective bloodlust so that others didn’t have to. 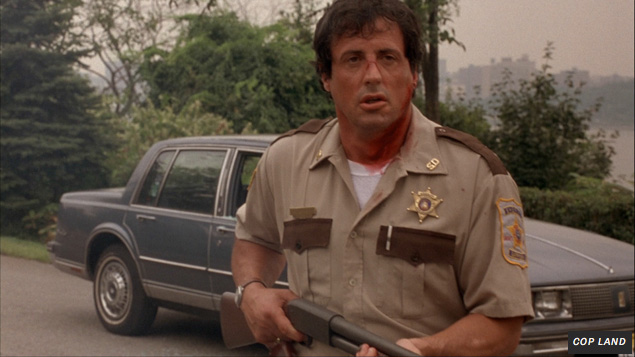 Even as Stallone tested out new genres, he stayed away from the thing that made him a star in the first place: low-budget movies about down-and-out characters looking for their one chance to make good. He finally returned to his roots and showed off his rarely utilized range in 1997’s Cop Land, written and directed by James Mangold. Stallone plays Freddy Heflin, a small-town sheriff in a Northern New Jersey town that’s just over the river from Manhattan, and home to some of New York’s City’s least-finest cops. Meek, lonely, and chubby, Freddy is a Rocky figure who never got his title shot; after losing most of his hearing as a young man, he was deemed unfit for the NYPD and settled down as a Garden State lawman instead. But when his town’s dirtiest residents cover up a crime, Freddy gets his chance at redemption.

Gaining or dropping weight is one of the oldest tricks in the book for movie stars looking to prove their “seriousness.” For a fitness nut like Stallone, putting on 40 pounds of flab to play Freddy was an even larger gesture. But Sly still delivers more than a dramatically bloated waistline. Going toe-to-toe with some of the most respected actors of his generation—including Harvey Keitel, Ray Liotta, and Robert De Niro—he not only matches them, but exceeds them. His is the most nuanced and believable performance in a movie full of cop-movie stereotypes and caricatures. It’s arguably his best work since the first Rocky.

Cop Land was the sort of movie designed to win awards—or at least a little credibility, something important for the man who was once so desperate to prove he was no bum. But despite decent reviews and an okay box-office take, it never really broke away from the pack of Quentin Tarantino-inspired mid-’90s Miramax crime thrillers. According to its IMDb page, the film won a single award; a Best Actor trophy for Stallone at the 1997 Stockholm Film Festival. Stung by the film’s failure, Stallone returned to action and genre movies. He hasn’t made another bid for respectability.