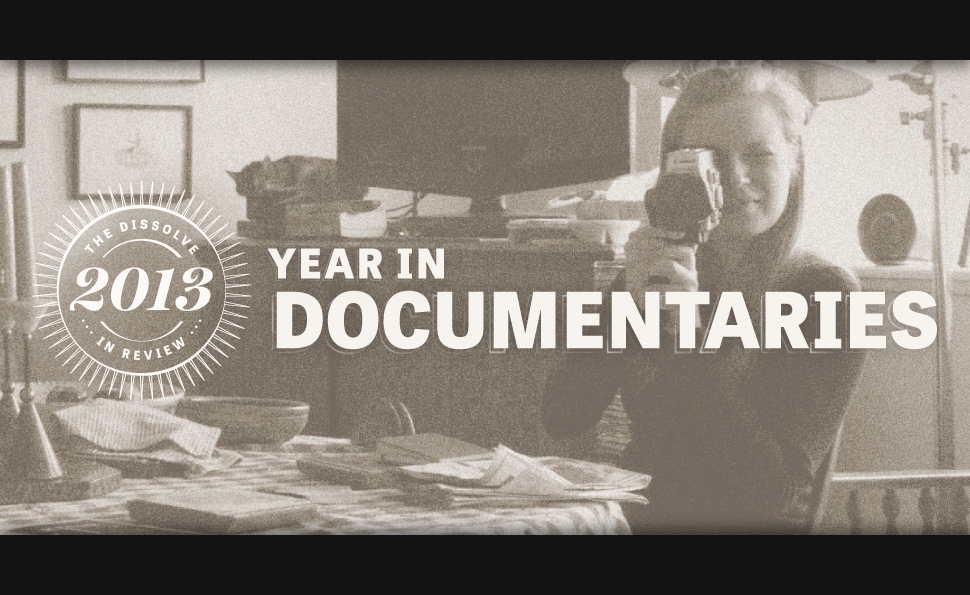 The year in documentaries: 2013 was about playing with form 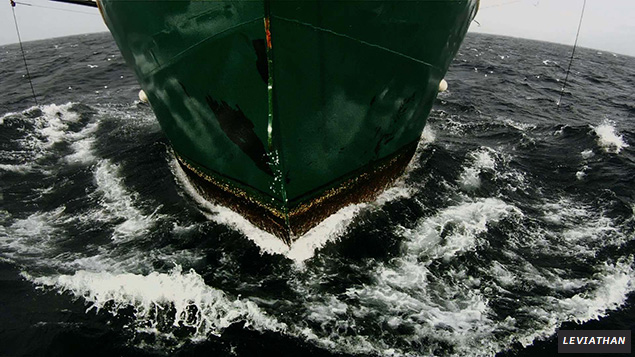 There’s a scene in Leviathan, one of the year’s best documentaries, where a commercial fisherman on the North Atlantic sits on a table bench in the break room, smokes a cigarette, and watches an episode of the popular reality-TV show Deadliest Catch. The connection between the two enterprises is unmistakable: Leviathan and Deadliest Catch are about hard men on the high seas, risking their lives in choppy waters that have devoured many other men—and whole ships. Deadliest Catch teaches viewers about the crew’s personal lives and conflicts, how many Alaskan crabs need to be netted to make a successful season, and the approach of the next storm that will test their resolve. In Leviathan—which might cheekily be dubbed a very special episode of Deadliest Catch, if Gaspar Noé did the directing—viewers learn nothing about the men, nothing about the business, and nothing about where this ship is going or where it’s been. And it’s glorious.

More experimental nonfiction than a documentary in the traditional sense, Leviathan spearheaded a year in which documentary filmmakers liberated themselves from past formulas and found new ways to express the truth. (Or the “ecstatic truth,” as Werner Herzog has put it.) Directors Lucien Castaing-Taylor and Verena Paravel don’t offer viewers information in the journalistic sense—the whos, whats, whens, wheres, and whys—but there is information in the film, just of a more intuitive, experiential kind. Over 87 relentless minutes, the camera swoops and plunges like the scavenging seagulls that follow the ship, diving into the blood and viscera of gutted fish, and sometimes into the water that churns menacingly below deck. Viewers are denied all the things they expect from a documentary, and instead given the opportunity to understand, in an artful, highly impressionistic (and a little gut-churning) way, what it’s like to be on that ship. It’s as pure a sensory experience as Gravity, but even more disorienting and horrific. It suggests that the conditions responsible for tomorrow’s fish sandwich are akin to a water-logged Industrial Age factory, or a blood-streaked abattoir. 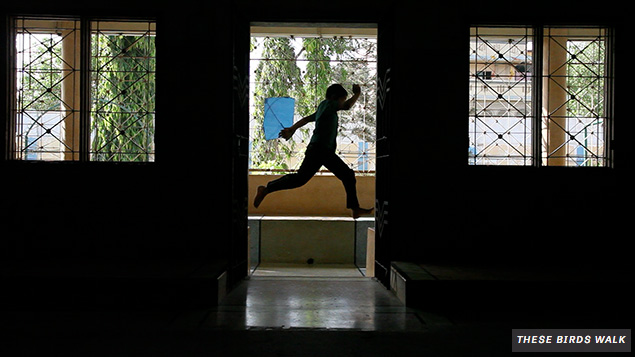 Leviathan is an extreme example, but so many of the year’s standout documentaries were equally committed to veering away from the realm of magazine pieces or Wikipedia, and finding truths only the camera can reveal. These Birds Walk sounds like one of those advocacy docs that end with a website URL and an earnest plea for viewers to get involved in an excellent cause. It’s about the Edhi Foundation, a 60-year-old philanthropic organization in Karachi, Pakistan that offers a number of services to the poor, including medical care and ambulances, shelters for lost children and abused women, and job training centers. Directors Omar Mullick and Bassam Tariq could have merely surveyed its many-tentacled operation, or profiled Abdul Sattar Edhi, its founder, who’s still alive and remarkably hands-on in its day-to-day functions. Instead, they limit the focus to the children’s shelters, which foster intense bonds and intense conflict, and to an ambulance driver who likes how the job connects him to other people and salves the loneliness he felt after his parents’ death. Better still, they shoot the film with a Terrence Malick-esque brio that exalts the preciousness of life itself and the value of Edhi’s mission to sustain it. You can’t get that from a website.

One of the great benefits of digital filmmaking, especially now that technology is finally producing film-quality images on the cheap, is that it makes pictorially beautiful documentaries like These Birds Walk possible. Ditto Narco Cultura, which comes from the seasoned lens of war-photographer-turned-director Shaul Schwarz, whose courage brings him and his crew to the cartel battlefields of Juárez, Mexico, and whose eye makes its horrors astonishingly vivid. Without such persuasive images, there might have been a crudeness to the contrast he draws between his two subjects: a Juárez crime investigator who risks his life every day to collect bodies and evidence that almost never lead to arrests and convictions, and a Los Angeles musician who writes and performs ballads called “narcocorridos” that glorify cartel exploits—and are often commissioned by cartel members. After supplying image after image of the bloody consequences of the drug war in Juárez, Schwarz exposes the musician’s “authentic” trip to Sinaloa cartel country as a propaganda tour of near-comic surreality.

Even a more conventional advocacy doc like After Tiller, Martha Shane and Lana Wilson’s thorny profile of the four remaining doctors who perform late-term abortions, offered moments of uncommon cinematic grace. With consent, Shane and Wilson were given access to counseling sessions where women and their significant others could talk through their feelings about why they’re seeking abortions so late in their pregnancies. For obvious reasons, the filmmakers couldn’t shoot patients’ faces, so instead, the camera often drifts to their hands, which wring, gesticulate, and shake with emotion. These unconscious movements are as much a window into their feelings as their faces might have been, and their words muddy up an issue that’s often politically cut-and-dried. The morality of the procedure is an ongoing concern for these doctors and their nurses and counselors, and no one draws the line in the same place; when one abortion request is questioned, a doctor wonders aloud whether the need isn’t legitimate, or the patient has simply failed to tell a good story. 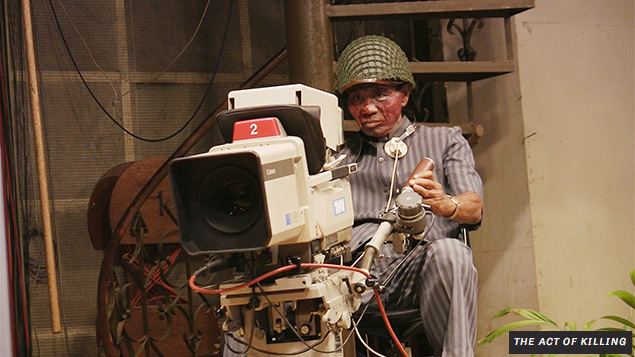 The cinema itself plays a central role in Joshua Oppenheimer’s The Act Of Killing: as inspiration and accomplice, as mythmaker, and as unexpected truth-teller, revealing things about an evildoer that he cannot recognize on his own. In the mid-to-late 1960s, a Western-backed coup in Indonesia empowered paramilitary thugs to “kill Communists,” a blanket order that led to more than half a million citizens being murdered. One extraordinarily prolific executioner was Anwar Congo, a cinephile who imagined himself as a hero from Hollywood movies and who employs Oppenheimer as a kind of collaborator to show how he went about killing so many people—with highly reluctant onlookers being pulled in as terrified extras. In its stage reenactments of unthinkable atrocities, The Act Of Killing resembles S21: The Khmer Rouge Death Machine, another great documentary that asked former prison guard in Phnom Penh to step back into their old roles, which they do with an ease that disturbs them and us. For his part, Congo struts around the streets with a braggart’s confidence, but the staged scenes have a powerful effect on him, too, especially when he’s cast in the role of victim. That’s the power of moviemaking: It requires empathy, and the moment a monster like Congo can understand how he looks from another person’s eyes, the nightmare is his to share. 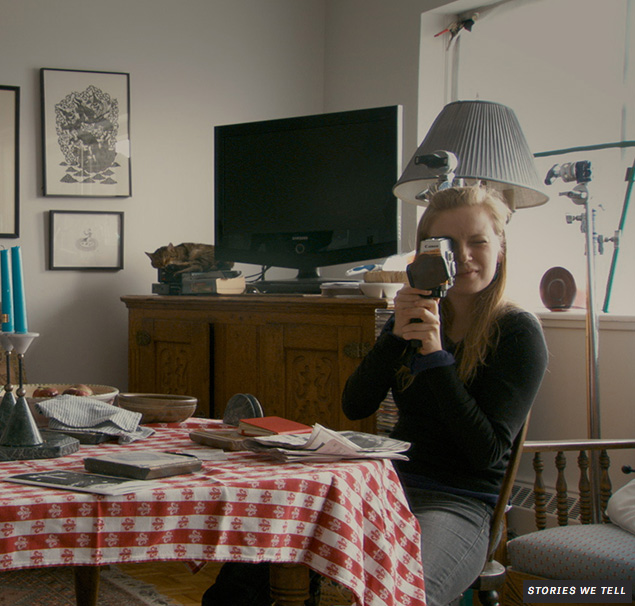 The very nature of narrative goes from subtext to text in Sarah Polley’s Stories We Tell, an immensely moving inquiry into a family secret that evolves into a thoughtful critique of how people deceive each other, or themselves, out of empathy, self-interest, or some combination of the two. Polley didn’t find out until recently that the father who raised her wasn’t her biological dad, and in an effort to process her feelings about it—and the emergence of her actual bio-father—she put everyone in her family in front of the camera except her late mother, who has a different sort of presence in the movie. It’s an amazing story on its own, full of drama and incredible twists and turns, but Polley keeps pulling back to this lie at the center of her life, and how it was sustained for so many years. The final third is disappointingly explicit about the film’s themes, but those themes are richly embedded in the varied testimony about the same, shared life experience. Everyone has their reasons, to quote The Rules Of The Game, and narratives are constructed to obscure as often as they are to reveal.

Credit the innovative Let The Fire Burn—a found-footage documentary about the tragic May 1985 end to the conflict between the city of Philadelphia and the radical urban group MOVE—for trying to let the story tell itself as much as possible. Like the recent Formula One doc Senna, Jason Osder’s gripping film is pieced together entirely out of existing footage, with no voiceover narration or new, retrospective interviews. Much like the remarkably democratic city hearings that were called in the wake of the deadly police offensive on MOVE headquarters, Let The Fire Burn seeks simply to understand how such a thing could have happened. And the context is unflattering to both parties: the cult-like MOVE, which provoked the authorities, harassed neighbors, and mistreated its children; and the city of Philadelphia, which responded in ways that were heavy-handed at best, baldly corrupt and racist at worst. Though Osder arrives at conclusions just as surely as his editing amplifies the gripping standoff between MOVE and the police, he does everything he can to immerse viewers in a volatile period in the city’s history. That’s what all 2013’s great documentaries have in common. They don’t merely inform: They transport.