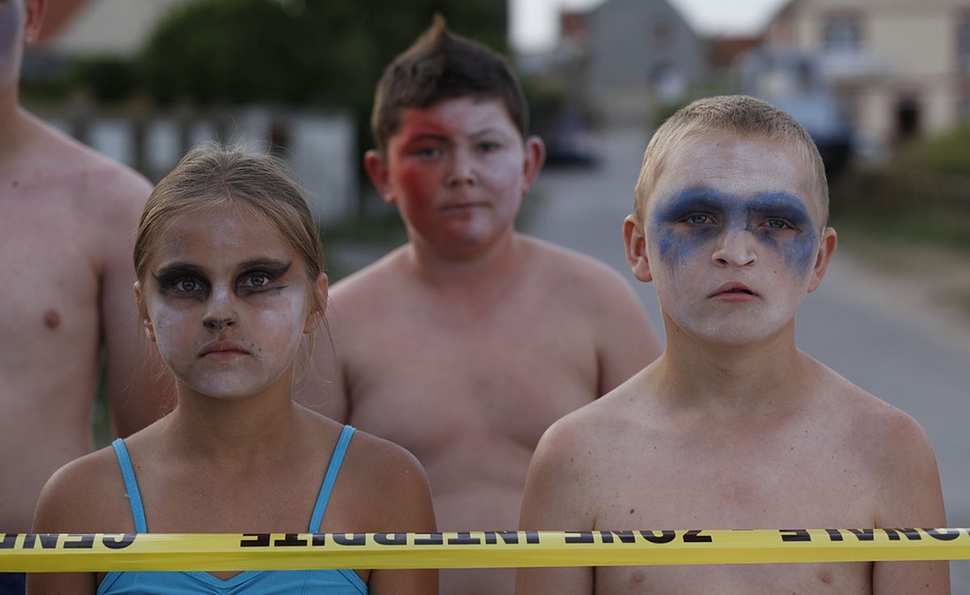 Nope. Li’l Quinquin does feature an unpredecented amount (meaning any at all, really) of intentional humor, but it’s still a Bruno Dumont movie through and through, for better and worse. What’s more, while it was originally made as a four-part TV miniseries, it doesn’t feel a bit like television. It unfolds with the steady rhythm of a long, lackadaisical feature film, which is how it’s been screened at festivals. The version opening in the U.S. still has episode breaks, but each installment concludes at a fairly random point, with the next one picking up right where it left off. Numerous internal fades to black—which appear for a moment to be the end of an episode, but are not—strengthen the sense of continuity.

In another change of pace, this is the first Dumont film to focus, at least in part, on children. Quinquin (Alane Delhaye) is the ringleader of a group of pre-teen troublemakers, who are excited to spend their summer vacation merrily terrorizing their sleepy rural town in northern France. Early in the first episode, they spot a helicopter that’s airlifting… is that a dead cow? Racing around on their bikes to get a closer look, they discover that the cow, found in an abandoned World War II bunker, contains the dismembered body (but not the head) of a woman. It’s the first in a series of similarly grisly crimes. Captain Van der Weyden (Bernard Pruvost) spends the rest of Li’l Quinquin doggedly investigating the murders, often with Quinquin and friends at his heels. These naturally curious kids wind up learning more about the darker side of human nature than they bargained for, as various clues lead to shocking incidents of racist cruelty.

Not a laugh riot, on the whole. And yet this very Dumontian disquisition on good and evil is often funny, albeit in a bizarre, surreal way. Quinquin’s grandparents, for example, set the family dinner table by literally throwing plates and cutlery onto it from halfway across the room, apparently because they can’t be bothered to walk any closer. Captain Van der Weyden seems competent enough, but it takes a while to place any faith in his ability, because Pruvost plays the character, with no explanation whatsoever, with a variety of bizarre facial tics, constantly wagging his eyebrows and grimacing while engaged in otherwise ordinary conversation, or just standing there. (Given Dumont’s past use of disabled or mentally handicapped people, especially in Camille Claudel 1915, it’s entirely possible that Pruvost, who isn’t a professional actor, has this affliction in real life, and was cast largely on that basis. Google was no help, alas.) It’s possible to acclimate to this oddity, but it’s hard not to be amused at first.

Such injections of levity, coupled with fewer grotesque provocations than Dumont generally favors, make Li’l Quinquin one of his more accessible works. His stubborn refusal to provide closure, however, gets magnified here, with the shrug of an ending coming across as especially unsatisfying due to the project’s unusual length. For all three hours and change, it’s never less than interesting, but it’s also never much more than interesting. Google-translated reports in French suggest that Dumont has been commissioned, or at least approached, to make a sequel, or a second series, or whatever one might call it. That might help relieve the maddening sense that there’s more to this oddball world than meets the eye.

(Li'l Quinquin is opening in limited release. It's also available for streaming on Fandor.)