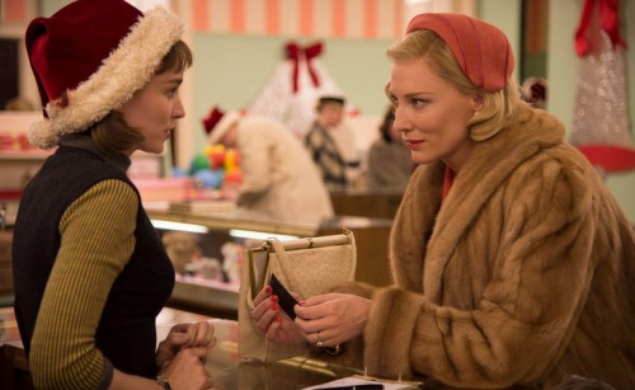 Harbinger of doom: Cannes, part 1
Cannes: It’s been happening. And totally dominating the news cycle. Which is why I’m going to continue that tradition and dedicate two separate sections—a harbinger of doom and a sign of hope, respectively—to the goings-on at the French film fest. There’s been a lot going down on the Croisette, and I’m not just talking about Champagne and various controlled substances. (Zing!) Let’s break down the dark part first: something the media’s been calling “Flatgate,” which, fine, I’ll bite.

Numerous women were denied access to the gala premiere of Carol for wearing “fancy flats” (i.e, topped with rhinestones, which are fancy as fuck) instead of high heels. That’s right, that Carol—the movie about a repressed, 1950s-era lesbian romance. At first, official fest reps stayed silent on the matter, but several actors spoke out, as they are wont to do. Emily Blunt was one of the first, declaring during a press conference for her new film Sicario, “That’s very disappointing. We shouldn’t wear high heels anyway. I prefer wearing Converse sneakers. You kind of think that there’s these new waves of equality and waves of people realizing that women are just as fascinating and interesting to watch, and as bankable. [But] it was interesting, with this film, I think you [director Denis Villeneuve] got asked early on if you’d rewrite my part for a guy.”

A sidebar harbinger of doom (that ends in a sign of hope): Villeneuve clarified that, over the three years Taylor Sheridan shopped his Sicario script, he was asked to “rethink” the gender of the lead. “It was a screenplay that people were afraid of in part because the lead was a female character. And I know that the screenwriter was asked to rewrite the part,” Villeneuve said, adding that he and the producers embraced the script as it was. “But the pressure came before those guys [signed on]. I can’t believe — it’s crazy that I’m saying that right now.”

But back to #Flatgate. Valeria Richter, a Danish producer who has had part of her foot amputated, had trouble entering The Sea Of Trees screening because of her flats, as well. Though Variety reports that she was eventually let in, this is pretty goddamn horrifying. Cannes must have realized this too, as festival director Thierry Fremaux tweeted about the controversy on Tuesday, writing “For the steps (red carpet), nothing has changed. Smoking (tuxedo), black tie. No mention of heels,” then later blamed the whole thing on “one security guard’s excess of zeal.” I am going to use that excuse for every mistake I ever make for the rest of my life.

All of this might seem silly, on its face (or feet, as it were) (thank you, thank you). And in a way, it is—who cares what minor issues the rich and famous have to deal with in order to get into their fancy-ass film premieres? But, as Jezebel points out, the whole thing is really an extended metaphor for the industry’s inherent sexism. Moreover—and I realize how hypocritical this may sound—it’s bleak as hell that so much of the Cannes-related press has focused on this policy, rather than the fact that, say, only two of the films in Cannes’ main competition are directed by women. Can we get angry about that, instead? Or how about, on the flip side, can we celebrate the dozens of women rallying together at Cannes and calling out Hollywood for being a misogynistic hellhole? Let’s talk about them (after this quick commercial break).

Sign of hope: What’s up at Cannes, part 2
Let’s head back to Cannes, y’all. And let’s go ahead and celebrate those women I mentioned above, who are banding together to fight an industry that just wants them to shut up and look pretty.

Overall, was this a good, bad, or neutral week for women in movies, Rachel?
I’m so glad you asked. I’m gonna call this week neutral. Since everybody in the entire world except for us was at Cannes, that’s where most of the Female Stuff went down. And it was…a mixed bag. #Flatgate, that whole “two women in competition” thing, women feeling a bit of a “separate but equal” vibe: not great. But the fact that there were several panels devoted to the issue of gender parity—and that the festival’s director got all riled up about women in film, admitting Cannes could be doing better—is a positive sign. And, of course, we’ve got last weekend’s box-office record to celebrate, plus a record seven films opening this week with female protagonists, female writers, or female directors, which is pretty dope. Let’s call it even and reconvene next week, after we’ve all spent the weekend wearing fancy flats to various galas.