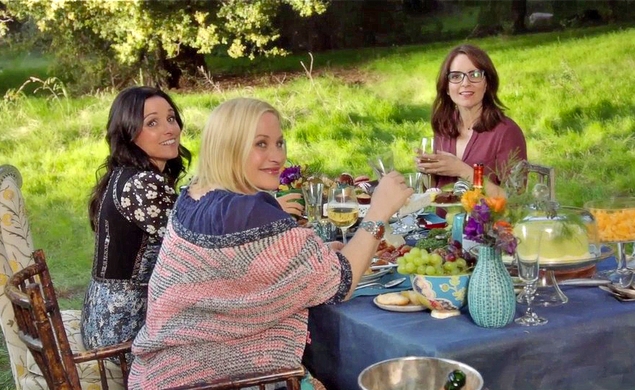 Harbinger of doom: Lots of Marvel bullshit
Oh, guys. Where to begin. So much non-comical comic-book bullshit this week. (Sorry, I had to.) First up, we have Disney and Marvel, which have a long and storied history of “forgetting” their female action stars when creating merchandise. (Check out the Tumblr “But Not Black Widow” and you’ll see what I mean.) Earlier this week, as HitFix reports, Marvel released the list of merchandise available for the upcoming Avengers: Age Of Ultron (ever heard of it?). Black Widow, arguably one of the biggest stars of the franchise, shows up three times. That’s it. Once in a “videogame starter pack,” once on a men’s shirt, and once on a shopping bag. Elizabeth Olsen’s Scarlet Witch shows up approximately zero times.

Hot Topic, meanwhile, has teamed up with Her Universe and Marvel for a fashion collection called Marvel By Her Universe, which features designs by winners of a “Geek Couture” fashion show held at last year’s Comic-Con. It includes a Captain America halter dress, a Thor sailor dress, a Stark Industries bomber jacket, a Black Widow jacket, and a handful of other items. Essentially, here’s the world according to Marvel: Women can identify with, relate to, and proudly wear clothing emblazoned with both female and male characters, but dudes will only fork over cash for movies and merch featuring fictional dudes. (DC’s new “Super Hero Girls” universe—billed as a “superhero franchise exclusively for girls”—advances the same principle.)

Ready for round two? On Wednesday, in an interview as part of the Avengers press tour, Jeremy Renner and Chris Evans were asked what they thought of fans who “shipped” Black Widow with both of their characters. “She’s a slut,” replied Jeremy Renner. Chris Evans burst out laughing in his Chris Evans-y way, but did look a little uncomfortable, sort of like your younger brother looks when you ask him to hold your purse while you burn down your childhood home. “She’s a complete whore,” added Evans, traces of fear still in his eyes. “A trick, man,” said Renner. “She has a prosthetic leg, anyway. Leading everybody on.”

Yes, I know Black Widow is a fictional character, and yes, I know the two were “only joking.” But here’s the thing: These two men, for better or worse (jk, obviously it’s for worse), have a massive public platform and millions of fans. By calling Black Widow a whore for having been romantically involved with two men, not only were Evans and Renner bolstering and normalizing institutionalized misogyny, they were suggesting to their female (and male) fans—many of whom are young and impressionable—that women should feel ashamed of their sexual histories and identities. Moreover, in mocking Black Widow’s prosthetic leg—by suggesting, even sarcastically, that its presence makes Black Widow less attractive—they’re bolstering and normalizing institutionalized degradation and dehumanization of differently abled people. Think about all the high-school boys, starry-eyed and sporting those Captain America T-shirts, who watched this interview and thought, “Okay, it’s clearly still acceptable and funny to make fun of a woman for being ‘slutty,’ ” or, “It’s acceptable and fucking hilarious to mock my peers’ appearances.”

A lot of fans were outraged by the interview, and Renner and Evans were almost certainly ordered to clean up the mess they’d made. Both apologized quickly: Evans said, “Yesterday we were asked about the rumors that Black Widow wanted to be in a relationship with both Hawkeye and Captain America. We answered in a very juvenile and offensive way that rightfully angered some fans. I regret it and sincerely apologize,” while Renner wrote, “I am sorry that this tasteless joke about a fictional character offended anyone. It was not meant to be serious in any way. Just poking fun during an exhausting and tedious press tour.”

I accept Evans apology; it seems sincere. Renner’s apology, on the other hand, reeks of “sorry, MOM.” It’s passive-aggressive bullshit and it’s almost more regressive and harmful than his original comments. As my friend Shuhei put it in an impassioned GChat, “Chris Evans looks like he was being an idiot, and Jeremy Renner just looks like a dick.” And as Genevieve put it in a similarly impassioned GChat (we GChat a lot at The Dissolve), after sending me this very important photo, “Jeremy Renner reminds me of a potato in so many ways.”

Sign of hope: Smart, influential people speaking out about feminism
There were several women,and one Feig, willing to throw their hats in the feminist ring this week. Here are a few great quotes from around the web:

Harbinger of doom: Jezebel published and mocked Amy Pascal’s private Amazon purchases
I won’t link to it here, but I’ll just share with you that this week, Jezebel published a “comedic” essay by Natasha Vargas-Cooper called “This Is Amazing Amy’s Cheap, Crotch-Intensive Beauty Regimen.” In the piece, Vargas-Cooper parses the beauty routine of Sony exec Amy Pascal, as revealed by a new round of leaked Sony emails that included Pascal’s Amazon orders. It’s a nasty piece, one that takes pleasure in shaming Pascal for buying feminine hygiene products, bleach, and body oil; it even goes so far as to publish and deconstruct emails in which Pascal is openly stressing out about her diet and weight. Reading it made my stomach turn; I felt horrified for Pascal, embarrassed for Jezebel (a site I read often and enjoy), and angry at the thoughtlessness of Vargas-Cooper.

Vargas-Cooper tried to write around the fact that she was invading Pascal’s privacy, and sidestep the fact that she was tearing down a woman for buying products designed to improve her appearance (something most of us do), for openly admitting that she wanted to look pretty—for striving, basically. “Amy Pascal is a treasure,” she wrote. “She is a camp goddess who should become a legendary drag icon.” But the piece is, essentially, a public shaming, a dressing-down, and a violation. Here’s a sample line, related to Pascal’s purchase of feminine hygiene products: “What does your snizz smell like at the end of a hard day of Leaning In and reading Cameron Crowe’s shitty scripts? Like a lavender meadow? Probably not! Amy needs to be fresh. Amy needs to be free. Maybe one of these smells like pancakes.”

As New York Magazine’s Jessica Roy put it, “Invading a woman’s privacy online is the digital equivalent of invading her personal space in public: Both are violations of a human right to autonomy that men are born with and women, too often, must fight for. Last year, when hackers leaked hundreds of nude photos of celebrities online, many (including Jezebel) stood up for women’s right to privacy, arguing that downloading and viewing the photos was tantamount to sexual harassment. Publishing the intimate, non-newsworthy purchases of a public figure would seem to be not all that different.”

Roy also compared the piece to a brand of “mean-girl behavior” that most women, myself included, are painfully familiar with: “The hardest I ever cried was during phone fights with my best friend in seventh grade: We gave away each other's secrets like sticks of gum — easily, without regret. This behavior, especially among teenage girls, isn’t rare, but it’s also deeply memorable, the kind of thing you’ll randomly recall years later and still feel immediately anxious about. That’s why so many women have such visceral reactions to girl-on-girl crime: We see it, we know it, we’ve done it, and we’re done with it.”

This isn’t to say women can never criticize other women, or that Amy Pascal is a paragon of feminism. She’s plenty flawed, and she deserves to be taken to task for the things she chooses to say publicly. But why waste energy and time—especially on an ostensibly feminist site—tearing each other down in this particular way, when the rest of the world is already doing it so well for us?

Harbinger of doom: Female directors face “strong bias”
In “no shit” news of the week, a three-year study of the marketplace for female directors has found that women are “far more likely to work in independent film than on mainstream studio pics” and “nearly half of the industryites [the alien race that populates the film industry] surveyed believe that female-directed films appeal to a smaller audience than pics directed by men.” Again, this isn’t surprising, but it’s still unsettling to read as a fact. The study also found that the ratio of male-to-female directed movies in competition at the Sundance fest from 2002 to 2014 was about 3 to 1. By contrast, for the top 1,300 highest-grossing pics released from 2002 to 2014, the ratio was a little more than 23 to 1.

Some other fun findings: Movies with a female director were more likely than movies with a male director to be distributed by independent companies with fewer financial resources and lower industry clout. Male-directed films were more likely than female-directed films to receive distribution from a studio specialty arm or “mini major.” And, of course, the gender gap is at its widest in top-grossing films—only 4.1 percent of which see female directors.

The survey of those aforementioned industryites was equally unsettling. Twenty-five percent cited “women’s perceived lack of ambition in taking on directing jobs.” Twelve percent cited the belief that “women can’t handle certain types of films or aspects of production, such as commanding a large crew.” Only because we’re so busy trying not to have ambition!

Sign of hope: Amy Schumer’s “The Last Fuckable Day”
I want to end this Female Stuff on a happy note, because we all deserve that, at the very least. As we did last week, let’s conclude with something Amy Schumer-related. Here’s a new Inside Amy Schumer sketch, starring Tina Fey, Julia Louis-Dreyfus, Patricia Arquette, and Schumer. It’s called “The Last Fuckable Day,” and it is perfect. Please behold:

Overall, was this a good, bad, or neutral week for women in movies, Rachel?
Surprise! It’s a bad week in a string of bad weeks. We have Jezebel—a site that, in theory, rallies for feminism—invading the privacy of and publicly shaming a woman for trying to adhere to the beauty standards required by a punishing, sexist industry (and society at large). We have Marvel and Disney reinforcing the idea that everyone can relate to male characters, but only women can relate to female characters. Age-old stereotypes about women are preventing female directors from landing jobs. Amy Schumer, Paul Feig, Meryl, Ava DuVernay’s doll, et al. are doing their best to champion change, and for that, we can love them forever. But it’s clearly not enough. Will next week be better? Will I ever feel joy again?