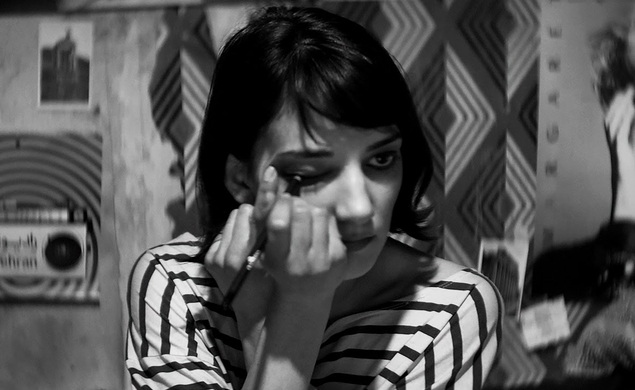 A Girl Walks Home Alone At Night (2014)
Directed by Ana Lily Armirpour
Free for Netflix subscribers on Netflix
A Girl Walks Home Alone At Night has, at this point, been likened to dozens of directors, films, and genres—it bills itself as a “feminist Iranian vampire western,” and it’s drawn comparisons to Jarmusch, Lynch, Tarantino, Let The Right One In, and Chinatown. But it’s more than the sum of its cinephile-bait parts, a moody meditation on youth and female oppression, and a tribute to the connective powers of art (particularly music). The movie unfolds in Bad City, a tiny, bleak Iranian oil town with what seems like exactly one gangster, one prostitute, and one vampire (Sheila Vand, billed as “The Girl”). The Girl isn’t your typical monster: She chooses her victims carefully, usually selecting men who prey on women—her first is the aforementioned gangster, who’s also an abusive pimp—and a scene that shows her dancing alone to rock in her small apartment is one of the early hints we get at her latent humanity. Most of the time, though, she’s completely silent, captured in beautifully constructed black-and-white shots standing on sidewalks, staring at her prey in a striped shirt and chador. When The Girl meets would-be dinner Arash (Arash Marandi) and instead falls for him, the movie turns into something of a neo-noir love story. It’s equal parts funny, sexy, and ghoulish, and it’s an auspicious debut from Amirpour, whose next movie, The Bad Batch, sounds just as deliciously weird and dark: “A highly twisted, unusual, romantic, and innovative movie set in a future dystopia. In a desert wasteland in Texas, a muscled cannibal breaks one important rule: Don’t play with your food.”

Scenes From A Marriage (1973)
Directed by Ingmar Bergman
Free for Fandor subscribers on Fandor (only through the weekend)
About to get married? Thinking of getting married, ever? Watch Bergman’s Scenes From A Marriage first (ideally not right before your wedding; you need a little time to recover). The almost three-hour-long romantic drama—cut down from an even longer TV miniseries—follows the ups and downs of Marianne (Liv Ullman) and Johan (Erland Josephson), a Swedish couple who have the “perfect marriage.” Their mothers are best friends, their friends are jealous of their wedded bliss, they’ve got ostensibly perfect children (who are never seen on camera, they’re so perfect), they’re on the receiving end of a glowing magazine profile. Until Johan falls in love with another woman. The film is a raw and almost too-detailed look at the disintegrations and rehabilitations of a relationship. Bergman is clearly invested in the question of whether true, lifelong monogamy is possible—he’s interested in getting right at the heart of the matter, so to speak, and the script and tightly framed shots reflect that desire to fully undress the concept of marriage. It’s a tough but lovely movie, and an important entry in Bergman’s filmography, which has always dealt with the twin concepts of love and loneliness.

Selma (2014)
Directed by Ava DuVernay
$14.99 to buy on Amazon
Even if you’ve already seen Ava Duvernay’s Selma, it’s worth the $15 to own a copy. It’s a stunning, powerful film that was, unfortunately, half-swallowed by nonsensical hoopla surrounding its “historical accuracy.” Its detractors were missing the point entirely. As our own Scott Tobias wrote in his Essential Viewing-tagged review, “There are times when Selma seems to speak so directly to recent events that it’s as if the speeches were being live-dubbed in the theater. History repeats itself, and DuVernay’s ground-level biopic feels the tremors.” It’s true—though on its surface, it’s a relatively faithful Martin Luther King, Jr. biopic, Selma transcends its subject, engaging with resonant and pressing issues like black voting rights and police violence against unarmed black men. And, of course, that’s not an accident—DuVernay rewrote much of the script, shifting some of the focus to Coretta Scott King, allegedly adding nearly a dozen new characters, and writing a fresh third act. As Scott put it, “DuVernay understands deeply how all these aspects of King’s life operated in unison to make him a courageous, disciplined, principled leader. And she understands even better how the movement didn’t end with him.”

Boyhood (2014)
Directed by Richard Linklater
Free for Showtime subscribers on Showtime Anytime after April 25
Hey, have you guys heard of this little movie called Boyhood? My trusty Newflix spies (me) are almost certain this Showtime Anytime streaming of the film marks the first time it’s been available to stream online free of charge. (As far as we can tell, it’s only been available for rent or purchase on platforms like iTunes, Google Play, and Amazon Instant, and on Netflix DVD thus far.) By now, most of us have likely seen Richard Linklater’s magnum opus, which follows a young boy (Ellar Coltrane) for 12 years as he comes of age in Texas, or at the very least watched dozens of clips of it as it won Oscars and mountains of critical acclaim. But wouldn’t it be cool and meta to rewatch it every year around the same time for 12 years and examine how your perspective of it changes? Or nah?