Cinderella cleans up at the box office, works its magic over mystified competitors 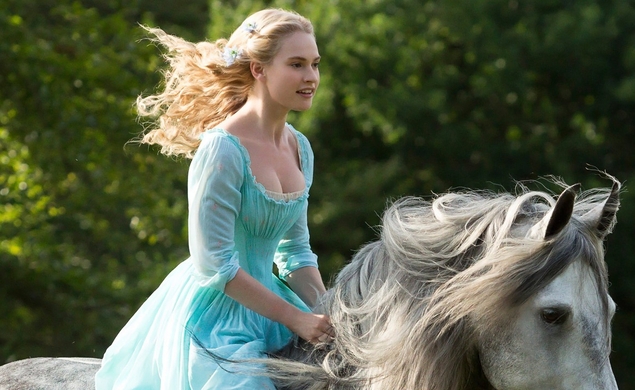 After last weekend’s box office slump—the worst weekend of the year yet, remember?—the multiplex has bounced back in a big way, thanks to the charms of a bright-eyed, animal-loving, dress-making, and soot-sweeping fairy-tale heroine who worked an appropriate amount of magic over a box office that, yes, could very much use some tidying up. Disney’s live-action Cinderella dominated in its first weekend in release, probably using a pack of well-mannered mice to collect its $70 million take.

The Kenneth Branagh feature made just enough to eke out Disney’s other recent take on the fairy tale, last year’s Maleficent, which made $69.4 million during its first weekend of release. That film went on to make over $240 million domestically, and it looks as of the House Of Mouse’s newest take on an old story could hit that same mark (we’re going to call it at $250 million, because this film has the added magic of both Cate Blanchett and Helena Bonham-Carter). Still, the tale of a girl, her glass slipper, and a carriage-driving goose couldn’t measure up to Disney’s smash hit Alice In Wonderland, which made over $116 million during its opening weekend, going on to make nearly $335 million in domestic dollars (for a little bit of comparison, Alice actually outperformed every single Harry Potter film, save for one).

Cinderella’s take is certainly impressive—magical, even—when put into its appropriate genre context, but the film’s true power is evident only when you look at the rest of the weekend’s box office, especially its No. 2 entry, and the shocking gap between the new releases. The Liam Neeson-starring Run All Night (Taken with the guy from Robocop, we guess?) opened in the No. 2 spot, but before you start breaking out your “Number Two Ain’t Bad” banners, consider this: The film made almost $60 million dollars less than Cinderella. With just over $11 million in its first weekend, the Jaume Collet-Serra feature is the worst-opening Liam-Neeson-kicks-ass movie since 2010’s The Next Three Days (even The Nut Job, which is literally an animated movie about communist squirrels, made nearly twice as much in its opening weekend). Liam Neeson, perhaps it’s time to change things up a little bit (said with genuine affection and admiration).

Elsewhere, the rest of the top 10 was rounded out by a real mixed bag of wide releases, including Kingsman: The Secret Service, which held on to the No. 3 spot in its fifth week in release, and American Sniper, which is still at No. 9 after 12 weeks in theaters. McFarland, USA also has some unexpected staying power, running away with the No. 8 spot, with The DUFF similarly holding tight at No. 10.

What about Fifty Shades Of Grey?...is a thing no one has thought in actual weeks, but the film is tied up in the No. 11 spot, and it crossed the $160 million threshold just this weekend.

The other big story of the weekend? The prodigious performance of It Follows, the indie horror darling from David Robert Mitchell, which opened in just four theaters and managed to make $163,000 in its first weekend. That’s an average of $40,750 per theater, more than double the second best average (which belonged to Cinderella, not shockingly enough). It Follows was the weekend’s best performing limited release by a long shot, a designation that should hopefully scare up some new viewers as the film approaches its second week in release.

With the domination of both Cinderella and It Follows in the wide release and limited venues, respectively, the weekend belonged to a pair of female-driven features, a first for the year.